There’s something a little different about the Lakewood softball practices lately, and the Lancers think it’s going to be the key to their success as they try to retake the top spot in the Moore League.

“We have amazing chemistry and all of the girls get along,” Lakewood senior Bri Weeks said. “There’s no drama. That helps when we’re on the field communicating. I’m really glad I can go into my senior year with this group of girls.”

Coach Andy Miramontes agrees that the chemistry could create a winning environment.

“I don’t know how good we’ll be on the field but we’re a good team in that they really get along and gel,” Miramontes said. “There’s a lot of harmony and it’s a different vibe out there that’s kind of refreshing for me. They just work great as a team.”

Weeks and junior Julia Miramontes have been key leaders during the offseason who have made sure everyone is on the same page, and they’ll be up the middle and at the top of the batting order. Weeks will be at shortstop, and Miramontes will be at second base. Both were named first team All-Moore League last year when the Lancers dropped three league games to Millikan and Poly. 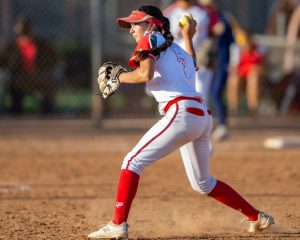 “Last year we learned that we have to work as a team,” Weeks said. “If we don’t have the strongest or fastest girls in the league we have to work with what we’ve got. We’re ready to bring it this season.”

Weeks has spent a lot of time at college camps over the last few years and has incorporated the explosive speed drills she’s learned there into her training. She is signed on to play at UC Davis where she wants to study in their prestigious Animal Science department.

Behind Weeks and Miramontes in the batting order will be junior pitcher Laci Berechochea and catcher Catherine Calzada. Berechochea, who was first team All-Moore League last season and can also play first base, will be the ace of the staff but has spent the last few months playing basketball.

“Laci is going to be our workhorse this year,” Miramontes said. “I’m a big fan of two-sport athletes to be honest with you, so I support her 100 percent, it’s just a little bit tough to get preseason games. Especially with COVID.”

Miramontes added that Berechochea’s skill in the circle isn’t the only reason she’s a great addition to his team.

“She’s got a carefree character and she’s always smiling… she’s a pleasure to be around,” Miramontes said.

Freshman pitcher Star Tapia will come on in relief for Berechochea and is just one of a handful of underclassmen who will get a lot of playing time this season. Weeks, Ariana Hernandez, Lorena Ruiz and Andrea Mota are the only seniors on the roster.

Miramontes said he really likes his outfield and how fast they can be to cover ground at Lakewood High where there isn’t an outfield fence. Freshman Khalea Pahulu leads that young talented group, and junior Madeleine Mendoza could add some experience in the outfield. She’ll also be battling with sophomore Madylyn Wynia and Ruiz for playing time at third base as well.

Ruiz or freshman Kaleyse Foster will be playing first base, but Miramontes said he’s going to be adjusting his lineup a lot this season.

“We’re going to do whatever it takes to win,” Miramontes said. “Whoever is hot is going to be in the lineup. I let them know from day one that they have to do it with their bat and I’ll find a spot for you.”

Lakewood is in Division 2 this season and is playing the nonleauge schedule of a Division 1 team with games against teams like Mission Viejo and Edison, plus a trip to Arizona next month for one of the top tournaments in the country.

However, there are two games that are certainly circled on the Lakewood calendar and those are the games against Millikan on March 17 and April 12 at Lisa Fernandez Field.

“That loss (last year) has left a bad taste in our mouths and we’re working hard towards, not just to beat Millikan, but to try to beat everybody in the Moore League,” Miramontes said.

Lakewood has won six of the last eight league titles, but only one in the last three seasons.

The562’s coverage of Cabrillo Athletics is sponsored by the Cohn Family Cabrillo has officially opened up its search for new head coaches for the Jaguars girls varsity softball and lacrosse teams. Any interested candidates should send their resume to girls athletic director, Denise Sarno @ dsarno@lbschool.net.

The562’s coverage of Long Beach Wilson Athletics is sponsored by Joel Bitonio, Class of 2009. All of The562’s water polo coverage for the 2021-22 school year is sponsored by Aqualand. Visit AqualandOfTheFree.com to learn more. Congratulations to the All-Moore League girls’ water polo honorees as selected by the league’s coaches. Support The562.org

This week on the show we’re talking about how pitchers have been dominating the story lines for Long Beach high school baseball and softball. We also catch up with Cabrillo lacrosse coach Danny Katene Marindin to discuss how the sport is growing locally.