The more things have changed the more they stay the same for Wilson as head coach Scott Meyer takes over this year. The Meyer family has a long, storied history at Wilson and Meyer said he’s honored to be coaching at his alma mater again.

“I’ve been able to coach at some great places and have some great experiences,” Meyer said. “But every time I’d drive by Wilson, there was an understanding of the family legacy— that’s where I played, that’s where I went to school. There was never a hurry to get there, but it’s been in the back of my mind my whole career. It all worked out — this is the right time.” 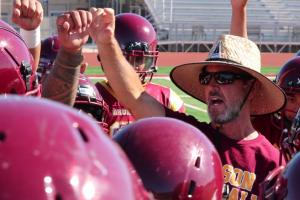 Meyer (left), who is taking over for Mark Ziegenhagen after six successful years, coached at Jordan before he was the defensive coordinator at Wilson in 2010. He won back-to-back CIF-SS titles at Corona del Mar and coached at Servite for four years as well. Meyer was the Lakewood coach for the past two seasons and knows he has a tough task ahead of him with a young, thin roster in an improving Moore League.

“It’s a pretty hard-working group that seems to like each other and like football, so we’re trying to bring it all together in a short amount of time,” Meyer said. “We want to continue the run of making the playoffs… It’s about staying healthy. We don’t have a ton of depth anywhere, so we’ve just got to stay healthy and get better each week.”

Meyer said he’s leaning on his small senior class and leaders like quarterback Xander McLaurin, defensive lineman Detroit Afusia and linebacker Cordae Jones to set the standard for the underclassman.

“I’m the guy no one is going to like by the middle of the season because I’m hard on everybody,” Afusia said. “It’s a family sport. Everybody carries themselves but we carry each other too. I feel like there’s some young guys on this team with a whole lot of potential and I just feel like they need somebody to help them get there. I feel like I can be the person to help them do that.”

Meyer is back coordinating his defense to implement more two-deep safety looks. He said his undersized front seven will force the Bruins to create more opportunities on defense with speed and an attacking style. Afusia will be joined by seniors Tito Harper and Evan Parga-Renteria on the defensive line while underclassmen like Curtis Johnson and Hunter Houston battle for starting positions.

The linebacking corps is the most experienced, with Jones and fellow senior Jack Gentile back in the starting lineup. Gentile was named first team All-Moore League in the spring. Sophomore Jordon Williams will play a huge role in the middle of the front seven.

McLaurin, who was second-team All-League, is the unquestioned leader on offense after showing toughness and growth in the spring as a first-year starter. That did wonders for his confidence and he said continuing to work with offensive coordinator Jim Houston has been a huge help in his development.

“Last (season) I had trouble reading coverages, but this year I understand the concepts and that made it a lot easier,” McLaurin said.

“Last year I thought he was a really good quarterback on film who got better each week,” Meyer said of McLaurin. “When we played him I really saw a competitor and some toughness in him.”

Gray is the most experienced running back, and said the chemistry with McLaurin on read-option plays came naturally.

“We just have to stick to what we did last year,” Gray said. “I came in and we had great chemistry like I was his brother from the start.”

Gray added that he likes what he’s seen at practice this month.

“We’re competitive out here,” he said. “Everyone is fighting for a starting spot this year. We’ve got a whole bunch of young kids coming up and I love that energy.”

“We’re really competitive with each other in everything you do, even in the weight room and outside of football,” McLaurin said. “I like to play pickup basketball and I don’t like to lose.”

Sophomore Christian Chapman and Afusia are also lined up to get carries in the backfield.

McLaurin will be throwing to a brand new group of receivers after a trio of decorated seniors graduated. The 6’6” senior Joshua Scott could be the go-to guy on the outside, but he’s recently been nursing a hand injury.

The Wilson offensive line will be anchored by center Parga-Renteria, and right tackle Bobby Mooney will be a solid addition. The 6’7” 330-pound transfer is recovering from injury and being brought along slowly. Junior Noah Vaafuti, senior AJ Bonner and sophomore Isaac Cazares will also be on the offensive line.

Wilson has some tough nonleague games on the schedule against Warren, San Jacinto and Huntington Beach. The Bruins continue the Battle For 7th Street rivalry with St. Anthony on Sept. 10.

The562’s coverage of cross country and track and field is sponsored by Bryson Financial.

We’re coming to you live from the Compton vs. Lakewood game as it picks back up tonight at 7:30 p.m. with Lakewood leading by a score. If you see anything missing tweet us at @562sports. Tweets by 562sports

After two years of cancellations and uncertainty due to COVID, the Moore League was finally able to celebrate its badminton teams with three days of competition as the Moore League finals commenced at Millikan. The three-day event turned out to be a banner week for the Poly badminton team that concluded on Wednesday with the […]