Nothing is coming easy for Lakewood and first-year head coach Justin Utupo.

The Lancers were recently forced to shut down practice for two weeks because of a positive COVID-19 test on campus. That caused them to cancel their first scheduled game against St. Anthony.

When Utupo finally got histeam back together late last week, they’ve had to practice on the baseball field because construction on the new turf field on campus is not complete. To make matters worse, a fire at a local helmet manufacturer means Lakewood doesn’t have enough new extra large helmets for their lineman.

Despite all of that, Utupo said his team is making the best of what they can get.

“The overall theme thus far is controlling what we’re able to control,” Utupo said. “Our players were disappointed (during the shutdown) but some of the leaders and seniors on our team rallied the position groups to get some extra workouts at a local park. We’re proud of them for doing the best they could.”

Utupo, a Lakewood alum who played at Notre Dame, is taking over for Scott Meyer, who left for Wilson. He is the sixth Lancers coach in the last decade, and wants to return his team to the glory he experienced playing for Thadd MacNeal in 2006-2010. 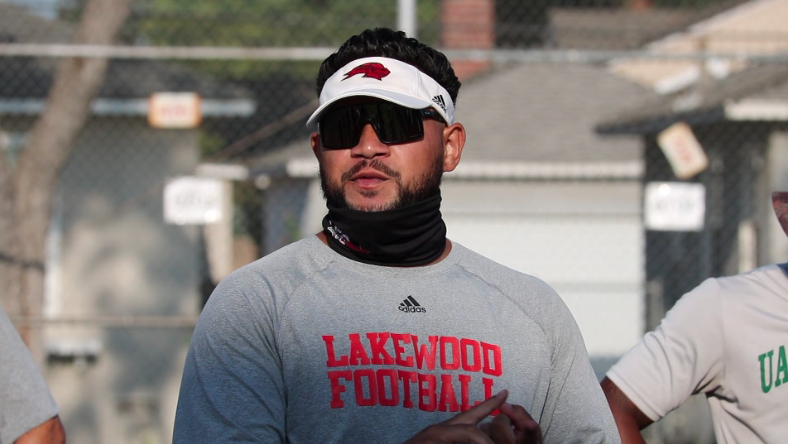 “It feels like where I’m meant to be,” said Utupo (above) who most recently coached at Orange Lutheran and also was the head coach at Millikan. “We all saw how Lakewood was the place to be under coach Mac in terms of the culture and what’s expected from the players on the field, in the classroom and in the community.”

“We’re like a family here already and I really like the coaches and my teammates,” junior quarterback Brayden Downen said. “It’s really fun out here. It’s fun to practice. (Utupo) always keeps us entertained with new things every day.”

Downen transferred from Wilson and has already impressed his new team with his natural arm strength. He won the furthest throw contest at the recent passing league event at Long Beach Poly.

“Coming in as a transfer is never easy and he quickly earned the respect of his teammates with his work ethic,” Utupo said. “He’s the first one on the field and the last one off. I’ve even seen him picking up trash at these 7-on-7 tournaments.”

Downen was voted a team captain this week, and wasn’t the only senior to say he likes the new urgency Utupo and his coaching staff bring to practice.

“The tempo and speed of practice is faster,” All-Moore League linebacker and team captain Travis Perryman said. “I like that because I want to get things done and get better faster.”

Sophomore Jay Tauala-Harris, junior Noah Mallon, senior Macc Manu and senior team captain Pisimaka Alauliitia are tabbed as the defensive line starters. Tauala-Harris is a 6’4″ 265-pound sophomore who has been working on his foot work and will play both sides of the ball.

Utupo added that he has a very versatile defensive back- field with guys like seniors Julius Jimenez and Devon Rodriguez.

On offense, Downen will be joined in the backfield by returner Auggie Lyons and some other exciting new ball carriers. He’ll also have returning senior AJ Alvarez at wide receiver, and converted offensive lineman turned tight end Nathan Ross who is a 6’4″ 225-pound senior.

Team captain and All-Moore League senior Dylan Foster is the anchor on the offensive line, and he said the Lancers learned a lot during the short season earlier this year.

“It’s about the bonds with the players,” Foster said. “We have to stay close, stay in in contact and work out together as much as we can. We have to be friends. And then we can overcome the change happening around us. We can overcome it by working together.”

“He’s everything we ask for as a student athlete,” Utupo said of Foster. “He brings the rest of the offensive line together as a unit to work as one.”

Abraham Sanchez the right tackle to saw some playing time in the Spring season, and Tauala-Harris will flank Foster on the offensive line but the other positions are still up for grabs, according to Utupo.

The562’s coverage of Jordan Athletics is sponsored by John Ross, Class of 2013.

Wilson girls’ soccer used its superior pace to push past Lakewood 3-1 at home in Moore League action on Tuesday night. A re-energized press from the Wilson forwards helped junior Samantha Thompson score twice in the second half. The Bruins (2-0, 2-0) outshot the Lancers 9-2 with six shots on goal. “You have to credit […]