Third time was the charm for Trevor Crabb at the last of three AVP Champions Cup events on Sunday in Long Beach — and he called his shot.

The Long Beach State alum and his partner Tri Bourne had finished third in the first two AVP events. They had also lost twice on consecutive weekends to Crabb’s brother and fellow LBSU alum, Taylor Crabb.

Not only did Trevor and Bourne get past Taylor and partner Jake Gibb, they went on to knock off Phil Dalhausser and Nick Lucena 21-17, 15-21, 15-12 in the championship match of the Porsche Cup. Dalhausser and Lucena had won the previous two AVP events by beating Taylor and Gibb.

“It was our time after two weeks of thirds,” Crabb said in the post match interview on the Amazon Prime broadcast. “We just went into that beast mode we go into and took it to the next level like we know we can do. Losing to (Dalhausser/Lucena) and Taylor and Jake two weeks in a row kind of helped us get motivated.”

After having its season schedule canceled due to COVID, the AVP hosted all three cup series events on consecutive weekends on the makeshift beach volleyball court in the Long Beach convention center parking lot.

“They saved our year by doing this,” Crabb said. “We would’ve had nothing to look forward to, especially in this crazy time with everything going on. Thank you so much to the AVP for doing this. We couldn’t have asked for anything better.”

Crabb made the last weekend of action more interesting by predicting a victory midweek. He posted on Instagram, “More pressure. I guaran-*******-tee a W” and got mixed reactions.

“Just trying to make history,” Crabb said with a smile. “When you know, you know.”

“My initial thought was ‘my partner is crazy’ but I already knew that,” Bourne said. “You can either be against him or join him, and he’s my partner so I’m jumping on and I reposted it and told him I was on board.”

Crabb and Bourne entered the Porsche Cup as the No. 3 seed and edged Chase Budinger and Chaim Schalk in the semifinals. They surprised Dalhausser/Lucena by taking the first set of the final, but the No. 1 duo answered with a strong second set victory.

With the fifth set tied 12-12, Bourne set up Crabb to go for the kill on two and he perfectly placed it on the back line for the lead. A pair of Bourne kills off the block clinched the duo’s first AVP title together. Crabb picked up his first win last year while Bourne was injured.

“In the third set, we just focused on our side of the net and tried to keep siding out and that’s what we did,” Crabb said.

The victory celebration without fans was still entertaining as Bourne set off the car alarm on the grand prize Porsche Cayenne Coupe that was parked near the court. He and Crabb also drank beer from the cup trophies. 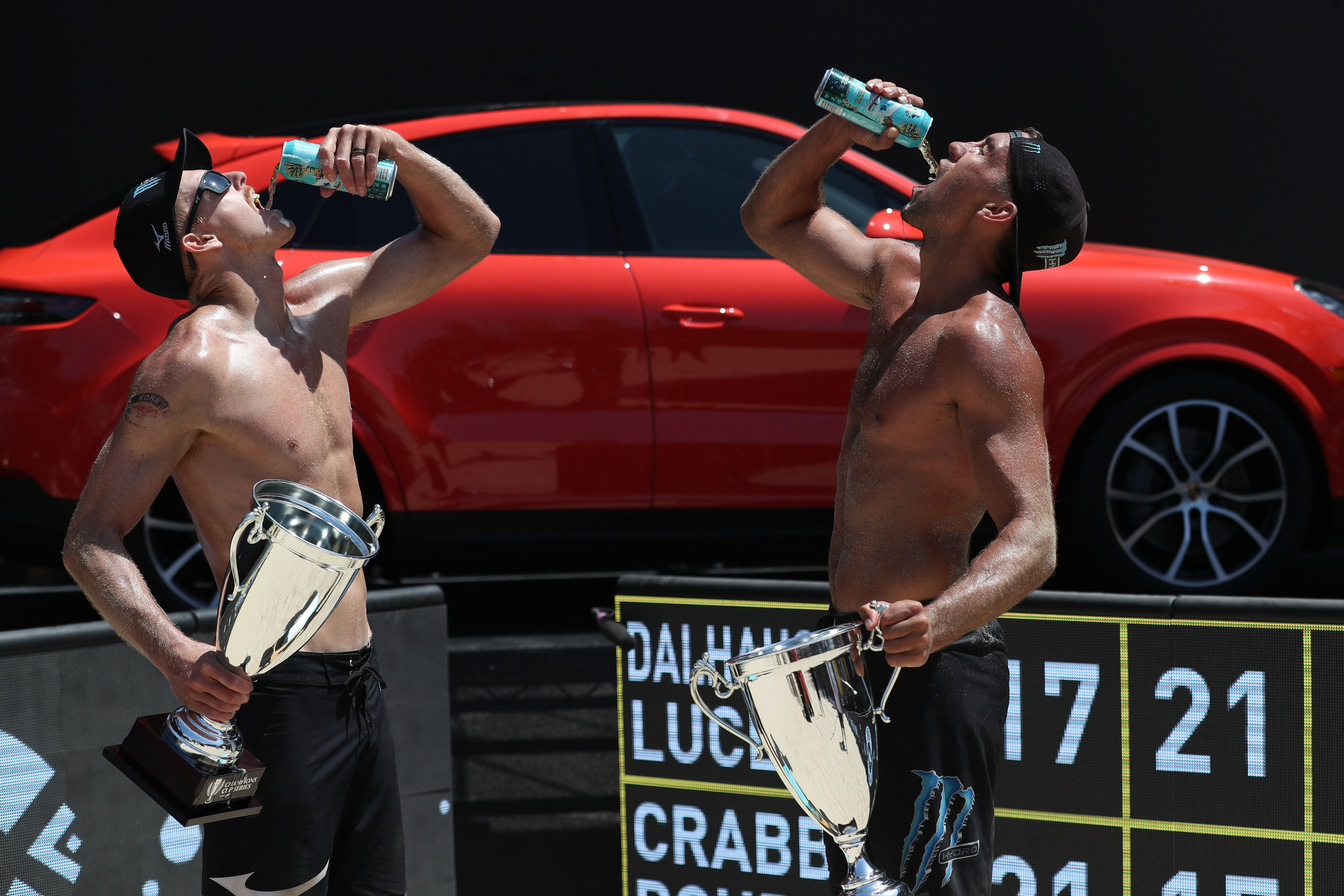 Crabb (right) and Bourne have only had two full seasons together as teammates, but they both grew up playing beach volleyball in Hawaii. Crabb and his brother Taylor played indoor volleyball at LBSU where Trevor played from 2012-13. The Crabb brothers made their professional beach volleyball debuts as teammates, and are now they’re battling for Olympic qualifying position.

Without any AVP or FIVB events currently on the schedule, Crabb and Bourne said they’re hopefully going to compete at a King Of The Court in the Netherlands next month before taking some time off.

“We have to wait for the FIVB schedule to come out for next year and then take it from there,” Crabb said.

FEATURE: Lakewood’s Julia Crawford Has Made Her Own Name

Julia Crawford wanted nothing more than to make a name for herself. The Lakewood outside hitter and Fullerton commit grew up on the baseball and softball diamonds of Long Beach, watching her older brother JP and older sister Eliza play–and excel. When she was entering high school she almost wanted to break with family tradition […]

We’re running down the most important local sports news this week before talking about watching the Women’s World Cup in Long Beach. 03:00 Former Dirtbag Jeff McNeil is going to the MLB All-Star Game 05:35 Long Beach Should Name Main Library For Billie Jean King 09:30 Lisa Busch Steps Down After 20 Years As Lakewood Athletic […]

Great action photos from the 49ers’ win from our own Stephen Dachman.