A week before Christmas Day, Iman “Biggie” Marshall brought some holiday cheer to the communities that raised him. The former Long Beach Poly Jackrabbit, who is in his third NFL season with the Baltimore Ravens, spent his Saturday dressed in a Santa Claus suit, handing out toys to kids in Compton and Long Beach.

“It’s bigger than me. It gets to a point where you understand that the most important thing in this world is giving back,” said Marshall, who was a fourth-round pick in the 2019 NFL Draft out of USC. “When you have the ability to do that, even at the smallest level or whatever level you’re at, that’s the most important thing. The opportunity to give back is what makes life so fulfilling.”

Marshall has been a consistent presence on the Poly Football sidelines during the team’s recent run to a CIF title, even speaking to the team after their quarterfinal win at Upland. Biggie has been able to support his alma mater while he recovers from a knee injury he suffered more than 16 months ago, which has kept him on injured reserve with the Ravens.

Both of Marshall’s parents are from Compton, while Iman was raised in Long Beach. His mother, Turkessa Lewis, helped facilitate the event and is happy to see her son giving back to the communities that raised him.

“I’m very proud of him, because at the end of the day he has to be productive on the field and off the field,” Lewis said. “While he’s going through rehabilitation, I want to make sure that he gives back to those that are where he was growing up. He was a child that grew up out of poverty and now he’s where he’s at now. It’s important to give back to the places that brought you to where you are.”

The Long Beach event was held at the Thomas Firm Law Office on Long Beach Boulevard, where dozens of families picked out gifts for their kids and went home with a box of food for the holidays. Marshall even picked the winning raffle tickets where one child went home with a new 40” flat-screen TV.

Marshall also received a Certificate of Recognition from 8th District councilmember Al Austin, recognizing his efforts in giving back to the Long Beach community.

“I feel like I have this opportunity, I have the platform, and I went to school just a few miles down the street,” Marshall explained. “It’s the perfect opportunity, the perfect place, and I love Long Beach. So why not give back to the area that helped me become who I am today?” 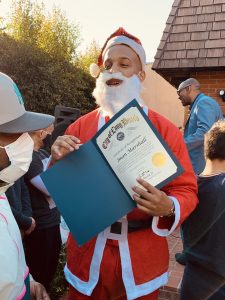 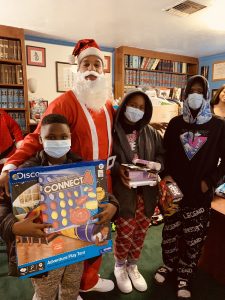 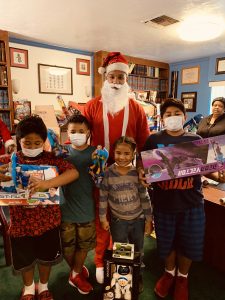 Long Beach Poly football coach Stephen Barbee had a good time celebrating his team’s overtime thriller against Orange Lutheran last week in the first round of the CIF Southern Section Division 2 playoffs–for about thirty seconds. As his team was still celebrating with their fans on the field at Veterans Memorial Stadium, Barbee was getting […]

As the Long Beach Wilson girls tennis team prepared to defend its Moore League title this week, there was one thing standing in the team’s way — getting clearance for each athlete to play.  The Bruins finally got clearance to play on Tuesday, just before the team was set to take on Poly to open […]