The five-star recruit was scheduled to take an unofficial visit to Oregon, where he was going to watch his older brother Alex suit up for visiting Oregon State in a crosstown rivalry game between the Ducks and Beavers. Daylen had to change his plans, but for a good reason: his Jackrabbits are going to be at St. Francis on Saturday at 7 p.m. facing the Knights in the CIF Southern Section Division 4 championship.

Asked if he was bummed to have to reschedule, he laughed. “For the ship? Nah, this is what we dream about,” he said.

‘Dream’ is a fitting word to use discussing Austin and his trajectory as a football player and recruit. Injuries sidelined him during his sophomore year and the first few games of this season, meaning that Austin has only played in 10 varsity games. Despite that and because of his obvious skill and potential, the 6-1 DB has been on every recruiting board in the country, earning scholarship offers from Alabama, Georgia, and plenty of other major programs.

“His ceiling is ridiculous,” said Poly DBs coach Rashad Wadood, who played at Arizona State. “He’s so good and he probably hasn’t cracked 20% of his actual potential. The sky is the limit for him. He hasn’t had a fully healthy offseason like he’s coming up on–lifting, refining his technique, and focusing on track. He’s going to come back even better next year.”

Austin grew up as the baby of a football-centric family. His mother, Daysha, is the president of Long Beach Patriots Snoop Youth League football program. His father, Al, is the city councilman for Long Beach’s eighth district. And his older brother, Alex, was the Moore League Player of the Year at Poly during Daylen’s freshman year, and is now a standout at Oregon State.

For those reasons, Daylen has known what his path looked like for a long time. He started playing football for the Long Beach Browns at five years old, and got plenty of football experience.

“I played every position on that team, I was center, I was guard, I played everywhere,” said Austin. “And I knew I was coming to Poly, I’ve always known that.”

Daylen said he always looked up to his older brother and enjoyed working out with him until he left for college. He also wanted to make sure he didn’t stand in his brother’s shadow for too long.

“When I got to Poly I didn’t want everyone to be like, ‘Oh that’s Alex’s little brother,’ I wanted to have my own name here,” he said.

Asked if he felt like he’s established that name, he smiled. “Definitely.” 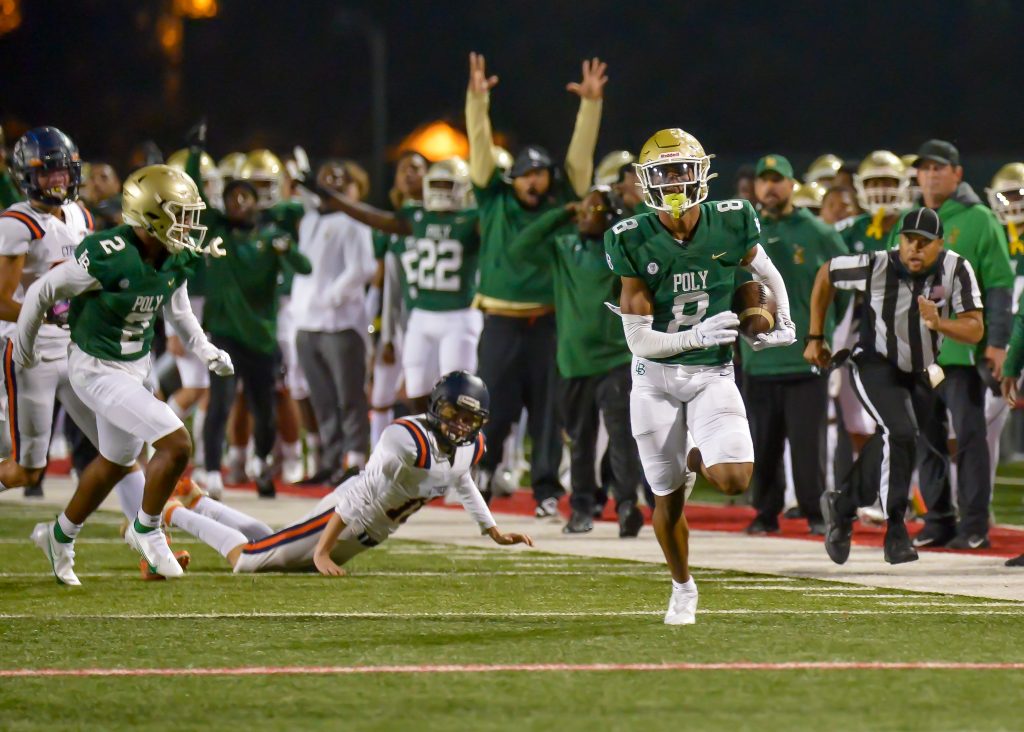 Austin has left his fingerprints on games in a variety of ways. He’s been a lockdown cornerback that’s given up very few receptions–he gave up just one in Poly’s 35-0 semifinal win over Cypress, and was visibly frustrated with himself after that one. He’s also excelled in special teams as a returner, and he ran back the opening kickoff of the second half for a touchdown in the semifinals against Cypress. It’s that big play ability every time he’s on the field that excites coaches, and it’s a reason St. Francis might see him lined up at receiver this week too.

“He’s one of those players that can make a big swing in the game in a lot of different ways,” said Poly coach Stephen Barbee. “He does anything we ask him to do and he’s humble even with all the recruiting attention he’s gotten. He’s a weapon any time he’s on the field and he has the ability to take a team’s best receiver out of the game.”

Even with all of his individual ability, Austin has remained a team-first player. Asked what kind of a touchdown he wants to score on Saturday–defensive, offensive, or in the return game, Austin just shrugged.

“I just want to win a championship, and I want to do whatever it takes to bring that home,” he said.

For the first time since 2012 and just the second time since 1986, Long Beach Poly’s baseball team will be champions of the Moore League. The Jackrabbits are one game clear of everyone else in the league with just one game to play, clinching at least a share of the league championship thanks to a […]