All of The562’s cross country coverage for the 2021-22 school year is sponsored by Bryson. Visit BrysonFinancial.com to learn more.

For the first time in more than two decades, the Long Beach City College cross country programs got the chance to compete at the CCCAA State Championship meet. Both Vikings squads headed to Woodward Park in Fresno over the weekend, competing against the best junior college runners in California.

The women’s team placed 13th for the Vikings while the men’s team finished 21st. The young Vikings squad was led by a pair of freshman runners. Ailene Rios out of Long Beach Poly finished 33rd overall in the women’s race, posting a time of 19:48 in the 5K. For the men, freshman Leonardo Acevedo finished in 60th place with a time of 21:28 over four miles.

Both of those times were good enough to crack LBCC’s Top 10 list for Woodward Park, and their performances bode well for the program looking ahead to next season.

Full results from the CCCAA State Championships are available here. 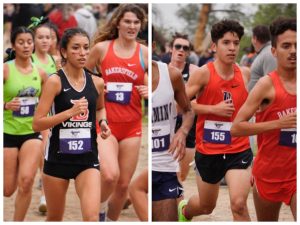 The postseason struggles for Moore League baseball have not been exaggerated. Millikan, Lakewood, Wilson and Long Beach Poly have gone a combined 6-24 in CIF Southern Section playoff games over the last six seasons, and now none of them are left in Division 1. All games are at 3 p.m. unless noted. In Division 2, […]