The St. Anthony football roster doesn’t have much playoff experience, but their head coach certainly does. First-year coach Raul Lara won five CIF Southern Section championships while at Long Beach Poly and he knows what the Saints need to do in order to advance.

“My experience has been to just stay focused on what’s ahead of you right now,” Lara said. “If we do that, and take it one game at a time, hopefully good things will happen for us. We can’t be looking ahead.”

St. Anthony will start the Division 10 playoffs by hosting Schurr on Friday at St. Paul High. Kickoff is scheduled for 7 p.m.

“I’m just excited that our seniors get this opportunity,” Lara added. “You could see on Friday night how excited they are to get into the playoffs.”

In the regular season finale, St. Anthony continued to rely heavily on running back Sone Aupiu. The senior rushed for 294 yards and four touchdowns in the 53-23 win over Harvard-Westlake that got the Saints (6-4, 3-1) into the postseason as the second-place finisher out of the Del Rey League.

Schurr (7-3, 5-0) is the undefeated champion of the Almont League, and the Spartans won their league games by a combined score of 235-60. Schurr has a balanced offensive attack with quarterback Jesse Preciado averaging 155 yards passing per game, and a group of running backs led by Isaiah Candelaria averaging 152 yards rushing per game.

Lara thinks his team needs to stay dedicated to the physicality it developed this season if it wants to keep playing.

“When I first got there the physicality wasn’t mentioned and it probably wasn’t preached as much as I have preached it,” Lara said. “The last two or three games— you can ask the opponents we played whether we were physical or not. Everybody knows Sone is physical, but I’m talking about our offensive and defensive lineman, linebackers and even our defensive secondary. I think that’s starting to come out with these guys. If we roll into the playoffs like that I think we’ll be okay.”

Looking at the rest of the Division 10 bracket, the winner of this game will face the winner of Katella and Cathedral City. If the Saints can reach the semifinals, they could end up playing league rival Salesian. St. Anthony lost to league champion Salesian 43-41 two weeks ago. 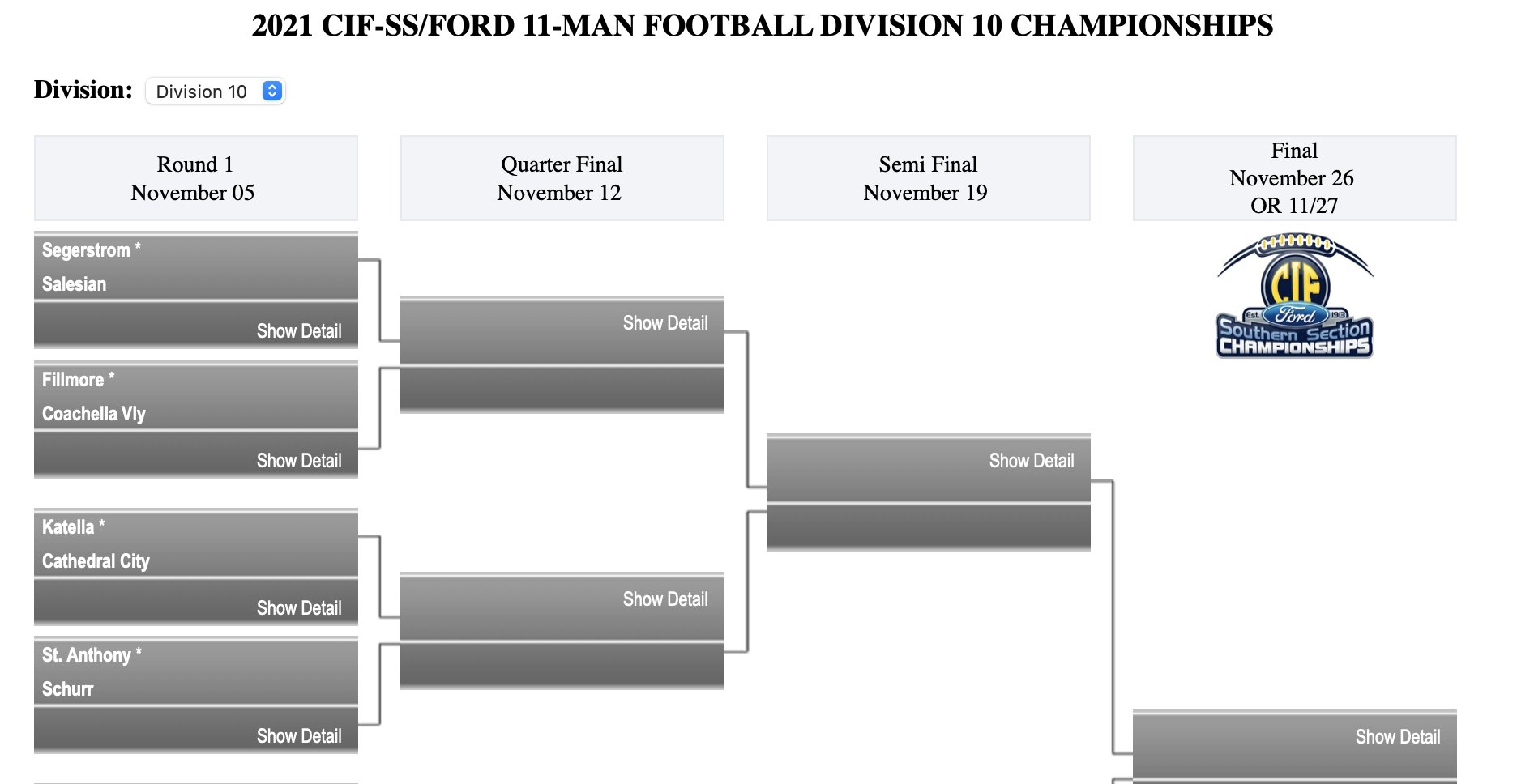 As we head into the eighth week of high school football games in Long Beach, here’s a look at where everyone stands. Support The562.org

We’ve got eight men on the field and one photographer on the sideline. Thanks to photographer Art O’Neil for this gallery of shots from Avalon’s win, which keeps them undefeated.

The last automatic CIF Southern Section playoff bid from the Moore League will be handed out at Wilson High tonight where the Bruins are hosting Compton. Wilson (5-4, 3-2) can clinch third place in league with a win, but Compton (6-3, 2-3) would force an envelope draw tiebreaker with a win, and a Lakewood win […]