A lot of pride will be on the line tonight when Wilson visits Millikan in the final game of the regular season. Kickoff is scheduled for 7 p.m. at DeHaven Stadium.

The Rams and Bruins played one of the most exciting games of the rescheduled season earlier this year, but now they’re two teams on the opposite side of the spectrum. Millikan (5-4, 4-1) has already clinched second place and an automatic CIF playoff spot while Wilson (1-7, 1-4) is already eliminated from the playoffs.

“I want us to play a complete game,” Millikan coach Romeo Pellum said. “I’m not worried about the score, I just want us to play a mistake-free disciplined football game, finish drives, make tackles and just execute the game plan.”

Millikan has won its last three games against Lakewood, Compton and Cabrillo by a combined score of 153-13. Rams sophomore quarterback Myles Jackson has passed for 2,036 yards and 27 touchdowns this season, and sophomore receiver Ryan Pellum has scored a team-high 12 touchdowns.

Wilson has lost its last two games against Lakewood and Jordan in the fourth quarter. In both games the Bruins had a chance to win with a late score but just fell short. Wilson will have to do a better job of controlling the ball and field position by using its rushing attack. Junior running back Johnell Gray is averaging over five yards per carry this month.

“They have their own little rivalry,” coach Pellum said. He had the idea for the coin toss.

“I thought it would be cool and pretty special for those guys,” he said. “They bleed their colors. It means a lot to them and it should mean a lot to everybody. They put the time in.” 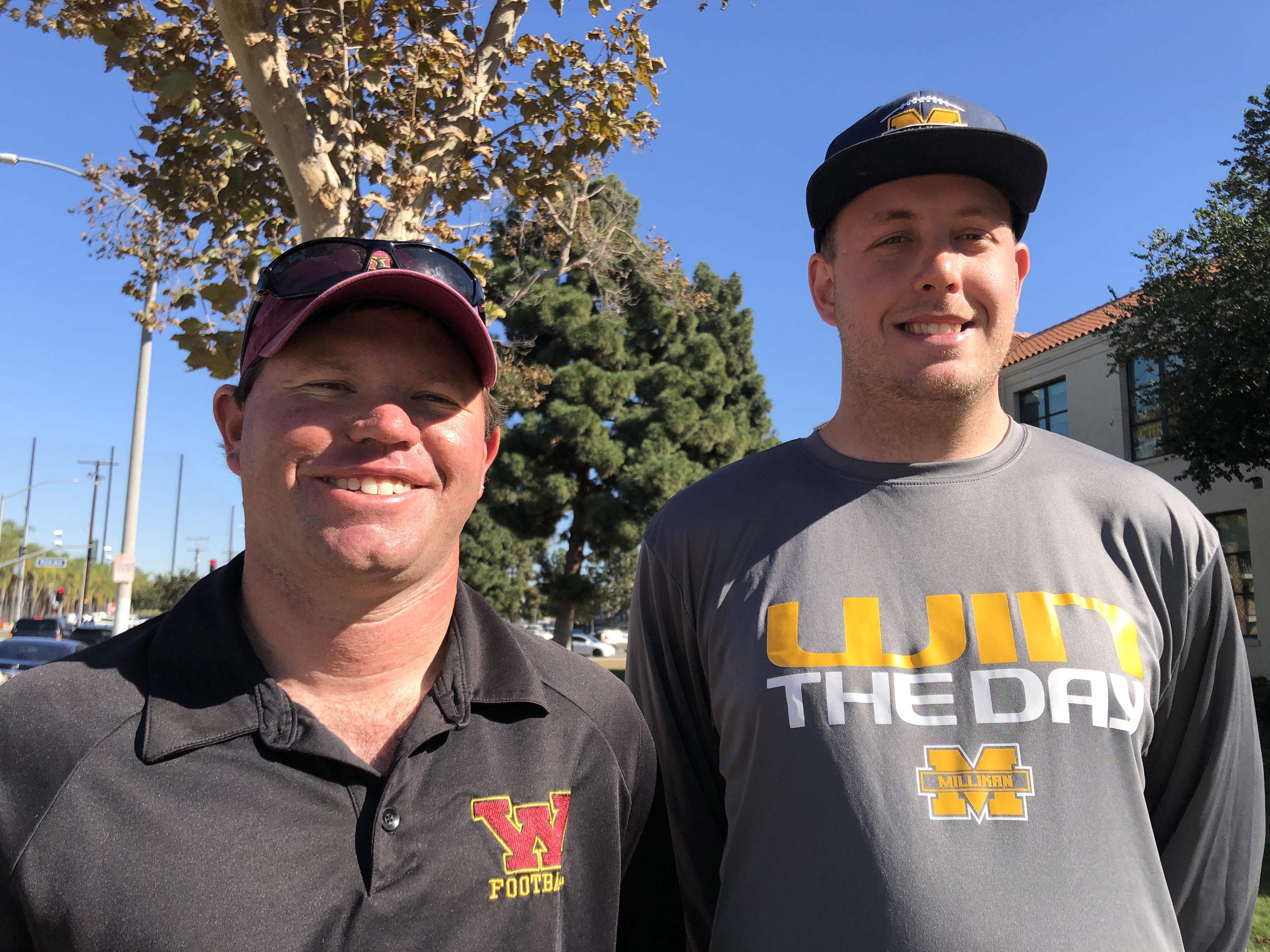 Sanders, who graduated from Millikan in 2010, only played one year of football for the Rams as a senior. He started helping head coach Kirk Diego and ended up being a volunteer assistant. Sanders has also worked with the Peninsula football program, but came back to Millikan in 2018.

“I knew I wasn’t going to be a college athlete so I figured ‘Why not give back to a community that did so much for me as a student and as a player?’” Sanders said.

Hauck, who graduated from Wilson in 2008, was a runner who played football for Mario Morales because he spent so much time on the sidelines when his dad was coaching. Hauck had been a ball boy since he was very young and has helped the Wilson, St. Anthony, Lakewood and Long Beach City College football programs.

“I’ve got the bloodline in coaching,” Hauck said. “I like being here and Wilson and like giving back to the school I graduated from.”

Currently, Sanders is the assistant to the head coach and Hauck is the equipment manager. Both of them are responsible for taking care of the little details like setting up the field for practice and making sure everyone has what they need on game day.

“They mean a lot to these programs,” coach Pellum said.

St. Anthony hit the road on Friday badly in need of a win to snap a four-game losing skid, and that’s exactly what the Saints got in Agoura. The team’s first road victory of the season came thanks to a 35-14 win over Agoura. Sone Aupiu put the Saints up 7-0 early, a lead they […]

STORY BY MATT SIMON Heading into Wilson’s second round match against Citrus Valley junior Risa Sena and the Bruins were confident that they could outplay the Blackhawks. Sena proved that has she led Wilson with 12 kills as the Bruins swept Citrus Valley 25-18, 25-21, 27-25 on Saturday night. “I think we really came into […]