The Parable of the Prodigal Son is a simple story from the Bible about forgiveness and acceptance. A son leaves his family and quickly squanders his fortune, but when he returns home his father welcomes him back without judgment or punishment.

Peako “Rocky” Tautai is Lakewood football’s version of the Prodigal Son this season.

After Lakewood went winless in the rescheduled spring season earlier this year, Tautai left the Lancers and tried transferring to Compton and then ultimately Cathedral High where he was promised more than could be offered.

“(Cathedral) made it sound really easy to get to college,” Tautai said.

Tautai practiced all summer with Cathedral, waking up before 5 a.m. to catch a carpool ride with one of the coaches, and he looked like a prospective starter when CIF Southern Section told him that he didn’t have a valid change of address. Therefore, Tautai would have to sit out games during his senior season.

Watching the first game of the season from the Cathedral sideline convinced Tautai that he needed to go home, and when he got there in August the Lakewood football program was completely different with first-year coach Justin Utupo at the helm.

“When I came back the culture had changed,” Tautai said. “Some guys were kind of giving me the side-eye but it was all love when I came back, they were like, ‘It’s all good, you’re ready to play, let’s do this’.”

“It’s one of those situations where you talk to your captains and coaching staff and I think we were all on the same page that he was influenced to leave and he was happy to be back,” Utupo said of letting Tautai back on the team. “I think his teammates were happy to have him back.”

“To be honest, a lot of things are pulling me around and I was kind of nervous to come back to the football team,” Tautai said. “But I told them what happened and they accepted me. I have a lot of friends on this team and a lot of the guys know me.”

“It was like he never left,” Lakewood senior defensive back Julius Jimenez said. “He was always family, and (getting him back) was like seeing a cousin you haven’t seen in awhile. He’s a great leader and attribute to the team. He’s a dog. He’ll do anything you need him to do.”

“Especially in the Polynesian culture we do as our parents and our elders say,” Utupo added. “I know he was heavily influenced by his family members to go somewhere. And I can’t be mad at a family for wanting to put their nephew or their son in the best situation… It was never a distraction for our team and it was all about moving forward.”

Lakewood is moving in the right direction now on a winning streak with Tautai playing linebacker again. They’ve won two of the three games he’s played in, and the Lancers have a big test tonight when they travel to face rival Millikan.

Tautai said he wouldn’t be where he is today if it weren’t for Lakewood athletic director Mike Wadley helping him sort out his paperwork.

“He’s a good kid and we welcomed him back with open arms,” Wadley said. “I feel like a lot of these kids, especially in basketball and football, are being led down the wrong path by some of these coaches. They’re not telling them what the real deal is. They get on those campuses and they have to sit. They’re giving these kids pipe dreams. When you’re telling these kids that this rainbow has a pot of gold at the end of it, of course they’re going to follow it.” 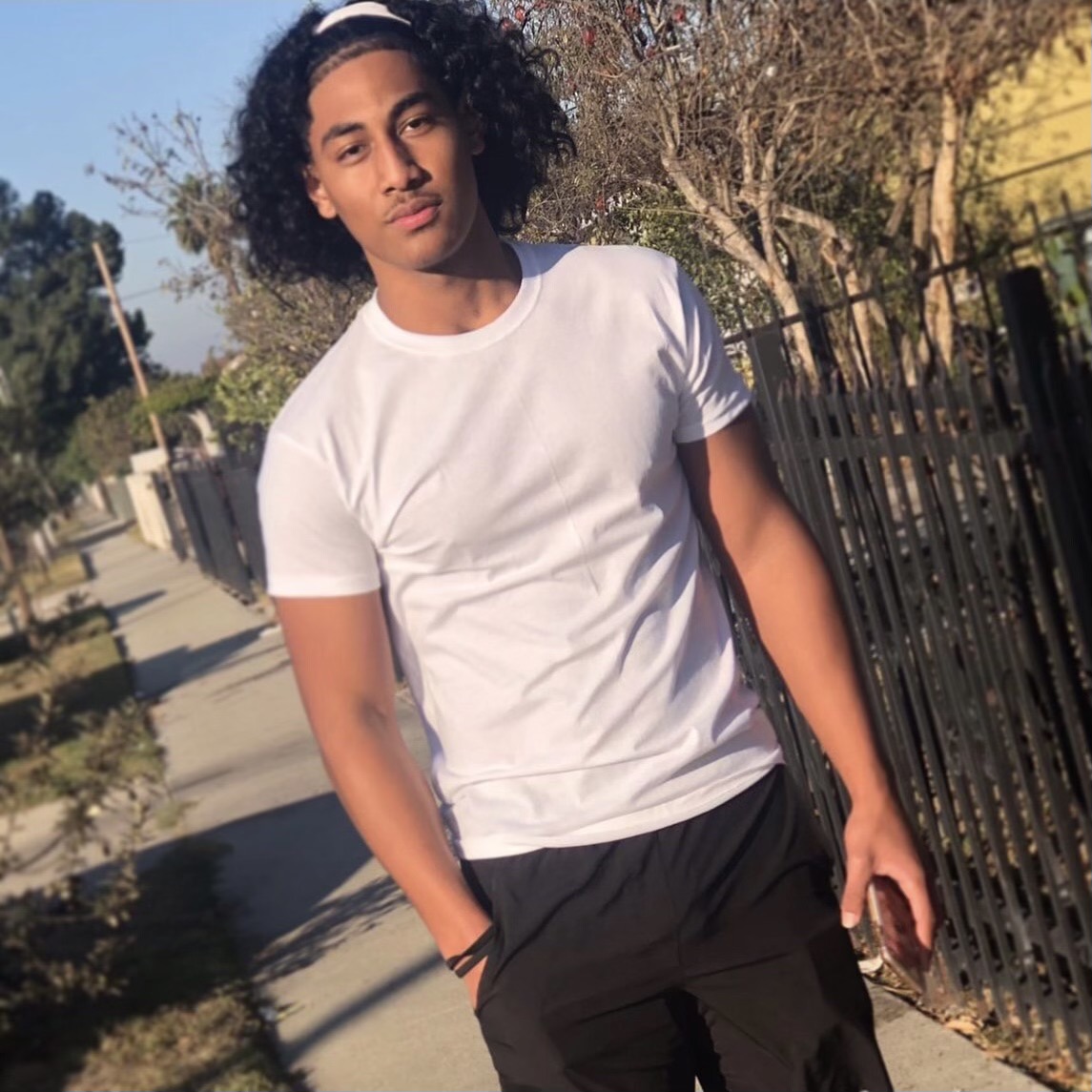 The 6’1” 205-pound Tautai has reason to believe he can get to the next level because of his dynamic talent and love for the game.

“When I was at Lakewood we never had a player like him on our defense,” Utupo said. “We had great safeties like Deon Bailey. We had great linebackers like Trevor Erno. And we had great defensive ends like Talia Crichton. (Rocky) is kind of all three of those guys put in one. In today’s game colleges are looking for someone who can be that hybrid safety-linebacker-edge rusher and what makes him special is that he can do all three.”

Tautai grew up in Compton and Long Beach where he only played one year of organized sports as a 12-year-old Pop Warner defensive end. He remembers being able to easily get around offensive lineman and into the backfield, but that’s where his natural instincts stopped.

“I wasn’t much of a hitter and I was kind of just scared of the contact,” Tautai said. “I used to stop short of the quarterback sometimes, and that made me self conscious so I stopped playing football.”

Watching his older brother, Faio, play for Lakewood from 2016-19 motivated Tautai to get back into football, and he prepared by diving deep into football film on YouTube. He said he’d watch full games over and over again while specifically paying attention to the defenders’ whereabouts.

“I was studying how the players maneuvered on the field because I saw some of my own video and I was all over the place,” Tautai remembered. “I’ll watch the same play five times of a linebacker like Bobby Wagner, even when he’s not the one to get a tackle I still watch where he is and what he does.”

Training himself off the field took the overthinking out of the game for Tautai, and when he got to Lakewood for his freshman year he was ready to pour himself into football.

“It was so cool to have my brother there as a senior, and to be on the team and participating in the sport of football in general… I was ecstatic. It’s hard to put into words,” he said.

As for his fear of contact, Tautai said getting hit more at the line of scrimmage helped him get used to the physicality, and it helped him find a driving emotion he didn’t know he had.

“It wasn’t as easy as it was before, I was out there getting smacked,” Tautai remembered. “But that made it more fun, especially the anger that came with getting put on your ass sometimes. It felt good to have that level of emotion on the football field.”

Tautai impressed himself and the coaches with the plays he was able to put on film his freshman year as he learned how to play linebacker. After a very successful sophomore season, he didn’t stop studying film during the COVID-19 shutdowns.

When he returned from Cathedral two months ago, Tautai quickly made his mark on the Lakewood football program with this play and his presence.

“It’s not every day you get a player like Rocky walking around campus,” Utupo said. “He had a good relationship with his teammates before he left so it was easy for him to pick back up. He has a great personality, he’s well liked and he’s been setting a good example with his work ethic.”

GET TO KNOW “Rocky”

Favorite subject in school: Anatomy. It doesn’t involve too much math and I like to learn about the body. As a kid I had family members complaining about knee aches and I really wished I could help them back then. When I found out studying kinesiology could help my family I got really interested in that.

Favorite required reading in school: Johnny Tremain. It’s fiction so I really like the scenery it creates.

Favorite food: Spaghetti, my mom makes it. We used to get these spicy sausages and throw them in with cheese, I love it like that.

Favorite TV show: Rick & Morty. I like the Mr. Meeseeks one. I remember watching it and then I couldn’t stop saying “Hi, I’m Mr. Meeseeks” walking around my house. That’s hilarious.

Favorite movie: Gattaca. We actually watched it in biology class. I was really surprised that a movie could be made like that. I was actually nervous watching that movie. It was crazy.

Favorite music: I listen to everything. I even listen to some Japanese music sometimes when I’m studying.

Favorite celebrity to meet: Leonardo DiCaprio. I want to try acting and he’s great so I would take some tips from him. That Wolf Of Wall Street movie was something great.

Favorite celebrity growing up: The Rock. I liked the way he acted and he’s Samoan, so I was like, “I might be an actor.”

Favorite sport to play besides football: I want to play volleyball so I can test myself and see my limits.

Here’s where the Long Beach teams stand with two weeks of games left until the playoffs–Long Beach Poly hosts Jordan tonight in a meeting of the last two undefeated Moore League teams.

Compton is trying to start its season 2-0 for the first time in eight years after beating Compton Centennial last week. The Tarbabes (1-0) are hosting Santa Monica tonight at 7 p.m. “It’s always good to start 1-0 without playing a scrimmage,” Compton coach Calvin Bryant said. “We have to be focused on protecting the […]