Although many parents have been overwhelmed with emotion while watching their children return to athletic fields across the nation this year, it’s fair to say the tears Kimberly Johnson wept when she saw her son Marcell Lineberger play football again came from a deeper place.

“It was absolutely tears of joy,” Johnson said. “I didn’t care that he didn’t get a pass thrown to him. Just to see him out there in that uniform looking as good as he did… it felt like the day I had him.”

Lineberger was diagnosed with Pancreatoblastoma, a rare type of pancreatic cancer, in December 2019.

“I thought I was going to die when they told me that,” Lineberger said. “I was really scared.”

He lost half of his pancreas and other organs during an invasive surgery, then after almost six months of chemotherapy Lineberger worked his way back onto the football field for this Spring season with the Lakewood Lancers.

“I remember going to see him, he had tubes coming out of him and it was scary,” Lakewood coach Scott Meyer said. “The first thing he said was, ‘Coach, when do we start football?’ I told him, ‘You’re going to kick cancer’s ass first and then worry about football.’”

Marcell Lineberger was born and bred to be a football player.

“He was a fat little chubby baby with a big head so we called him ‘Tank,’” said Marcell’s dad, Marshall Lineberger. “He was rumbling all over the place just tanking people.”

Marshall was already coaching Lineberger’s older bother and got “Tank” into flag football with the Long Beach Browns when he was only four years old.

“He was very hyper,” Johnson recalls. “He had to burn off some of that energy. He was always at Dad’s practices holding a football wanting to play.”

Lineberger played up an age group throughout youth football because of his skill and high football IQ, so he quickly grew out of flag football. It made sense to Marshall to get him into pads when he was seven years old. Lineberger was mostly a running back when he started playing but quickly fell in love with being a wide receiver because catching the ball came naturally to him.

“He’s got some of the best hands I’ve ever seen,” Marshall said. “That’s not because it’s my son. That’s because I know.”

Marshall has used all of the coaching tricks he’s learned over the years to help his youngest son become the best receiver he could be, and that meant hours spent at the local parks doing drills. He said he would throw the ball at Lineberger from about five feet away and from different angles to build his hands.

“He pushes me,” Lineberger said of his dad. “I work hard and know the game because he pushes me.”

Marshall even took Lineberger to Baldwin Hills for a different youth football challenge before he attended Lakewood High.

“I played freshman ball and I didn’t meet my own expectations,” Lineberger said. “I didn’t have time to work out. But that next summer I really worked hard because I’ve seen other kids getting (college scholarship) offers. I’m not mad and I’m not saying I’m better, but I know I’m on the same skill level if I could put it all together.”

He didn’t get that chance.

Kimberly Johnson has worked in the medical field for years, so it wasn’t strange that she had a device to check blood pressure in the house two years ago.

“I was just playing around and taking my blood pressure too,” Lineberger said. “It was 155 over 80. Normal is about 110 over 60, especially for an athlete.”

Johnson took her son to the doctor where they diagnosed him with hypertension after an electrocardiogram (EKG) and sent them home with some blood pressure medicine.

“I was very concerned,” Johnson said. “There was something in me that would not rest.”

Her mother’s intuition intensified when Lineberger complained of severe stomach pains in November 2019.

“I didn’t really get scared, I thought I had food poisoning or something,” Lineberger said. “I didn’t think anything like cancer.”

“I couldn’t sleep and everything I ate I was throwing up and throwing up blood,” Lineberger recalled. “The pain radiates all the way to your back so I couldn’t lay down or sleep. No medicine was working”

Finally a fifth trip to a specialist and more tests showed that Lineberger had a tumor on his pancreas that needed a biopsy. When the results came in the doctor didn’t want to give them to Johnson in front of Lineberger.

That was Dec. 11, 2019 and two days later Limburger was in surgery for eight hours to remove the tumor, his gal bladder, his appendix and other parts of his stomach. At first the family was told the surgery would be enough to kill the cancerous cells, but by the time Lineberger woke up they knew he’d also need chemotherapy.

Lineberger wasn’t able to leave the hospital after surgery until Jan. 25.

“Everything was hurting,” Lineberger recalled. “I couldn’t move. You really use your core for everything. Everything I was doing I could feel it.”

However, Lineberger didn’t just lay in bed for more than a month because Marshall went into football coaching mode.

“All I did was coach him in there,” Marshall said. “He could barely stand up so it started with pushups on the wall with the IV still in his arm. He’d sit in the chair in his room and I’d make him sit down and stand up. Over and over.”

Soon Lineberger was walking laps around the cancer ward. At first he couldn’t make it around without taking a rest, but Marshall kept coaching.

“Now that I look back at it I thank him, but in the moment it was like, ‘I just want to be left alone and sleep,’” Lineberger said. “But it really did help me because if I didn’t do that I would’ve been more out of shape and it would’ve taken me longer to get back.”

“All his life I’ve been working him out,” Marshall said. “The day we found out he had cancer I prayed over him… All of that working out was never for football. It was for that moment because of how strong he was. After the surgery you didn’t see the swelling.”

Johnson said that throughout the entire ordeal she never questioned whether or not her son would play football again.

“I knew my kid, I knew football was his life,” Johnson said. “I just knew he’d be back on that field one day. I didn’t know when, but I knew he was going to be back on the field.”

Meanwhile, the Lakewood football team didn’t know what had happened to Lineberger because he didn’t tell anyone. The Make-A-Wish Foundation even offered to find a way to cheer him up and he refused.

“He didn’t really want anything because he said, ‘That could go to another kid,’” Marshall said. “He didn’t want to bother anyone. I haven’t been around too many kids who are like that. I know how I would’ve been if I was in that situation. I’m meeting Joe Montana and Steve Young.”

Once he got out of the hospital, Lineberger and his coach/dad were bringing small weights to Signal Hill where he would walk up slight inclines and do squats. All the while he was still doing chemo treatments.

That’s when the COVID-19 pandemic took hold and changed everything. It was almost like the world hit pause so that Lineberger could catch up. He was able to take classes from home and his self-consciousness about wearing a mask in public was no longer an issue. 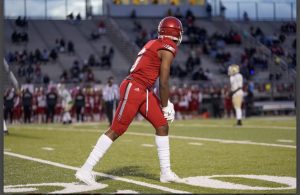 By the time his fifth round of chemo was done in June, Lineberger was already ready to get back on the football field with his Lancer teammates. He said he would get lightheaded while running at first, but Meyer and the other Lakewood coaches let him go at his own pace.

“It’s always in the back of your mind, especially when you see the scar on his stomach,” Meyer said. “You worry. But you trust the doctors and if he’s cleared hopefully he’s as safe as any other kid.”

Lineberger admits he’s lost some of his strength and agility after losing almost 30 pounds, but says he feels like he gets stronger every day. He wasn’t even feeling nervous before putting pads on in March for the first time in 16 months, and was strong enough to dress for the first Spring game against Long Beach Poly.

“You’d think I’d say, ‘I wish I never had this,’ but things happen for a reason,” Lineberger said. “I feel like God got a purpose for me because I’m still here after all of that happened. I think about it every day. I get motivated to work harder.”

Lineberger believes part of that purpose is playing college football— something he’s dreamed of since he was a little kid following his dad around the sidelines. He said he wants to study math in college and especially enjoys algebra.

“He has a chance,” Meyer said of Lineberger playing at the next level. “He’s got really good size and hands. Having this summer and offseason will make him a completely different player in the fall.”

Meyer added that Lineberger’s presence at Lakewood practice is about more than just how many passes the junior receiver can catch.

“It’s so awesome to see him every day and you can’t help but think where he was,” Meyer said. “And he’s a kid you can joke with a lot. I like to do that because of his big smile. He’s great to be around.”

Lineberger has hauled in a few catches during this Spring season, and will line up at receiver again tonight when Lakewood plays Wilson at Millikan in the last game on the schedule.

“I’m more grateful and I don’t take life for granted anymore,” Lineberger said. “You never know when it can be your last day.”

We’ll have live updates from the emotional return to the field for LBCC in their first game since losing 2016/17 safety Guy Alford. Read our preview of the game here; kickoff is at 6 p.m. If you see anything missing tweet us at @562sports. Tweets by 562sports