It’s hard to get yourself compared to a legendary athlete like “Prime Time” Sanders, but Xander McLaurin succeeded in doing so last Friday while also making Wilson High School history. The junior played in Wilson’s baseball season opener at 3 p.m. and then walked across campus for his first varsity football start as quarterback. McLaurin is the first Wilson student-athlete to start in both varsity football and baseball games on the same day.

“Some guy at the concession stand told me I was double-timing like Prime Time, and I was like, ‘Yeah, I guess I am’,” McLaurin said. “It was definitely an experience. It was amazing.”

Not only did he get a hit and score a run in the baseball game before his predetermined 4:30 p.m. hard out, McLaurin’s final throw of the football game was a last minute game-winning touchdown.

“He’s put a lot of time, effort, blood, sweat and tears into being as good as he is at both sports,” Xander’s father, Charles McLaurin said. “It’s all a life lesson… To be able to perform at a high level is a good accomplishment. To handle both of them in the same day is even better.”

When asked if he’s worried his son might get worn down playing two varsity sports at the same time, Charles laughed, “He’s done it his whole life. He’s played both sports year-around for as long as I can remember.”

McLaurin was born in Chicago and lived in Miami before moving to Long Beach when he was 4 years old. Charles signed his son up for all of the baseball and football he could handle a year later, but McLaurin has always considered himself a football player first while growing up a Chicago Bears fan like his family.

Wilson football coach Mark Ziegenhagen has known the McLaurin family since he coached one of Xander’s Los Altos baseball teams seven years ago.

“He was a stud pitcher in little league and he was the kind of kid you didn’t want to play against,” Ziegenhagen said. “I always tried everything to get him on my teams… He’s got great parents and he’s just a very low-key kid. He wants to get along with everybody, he wants to do right by everybody and he’s not a conflict guy.”

Those personalty traits served McLaurin well when he found out Moore League football and baseball would be played at the same time this month. He said he talked to everyone, from his parents and coaches to his friends and teammates, about what they thought he should do.

“It’s all about how you respect them,” McLaurin said of communicating with his elders. “I can’t control everything I do, it’s really up to the coaches. I have to be respectful of them so they can make the right decisions for me… I told (my teammates) I might be late to some games or early to others and I just gotta play in by ear. They said, ‘Just do you, man. As long as you’re at the game it doesn’t matter’.”

“I told him, ‘I’m not going to tell you that you can’t play. Play as much as you can, especially after what happened last year,” Ziegenhagen said. “I worry about him getting hurt, but this is what they all fought to come back for. They all fought to play and I was not going to let him down on that, for sure.”

Wilson baseball coach Andy Hall echoed those sentiments because of the extenuating circumstances.

“If it was a traditional year I would’ve just said, ‘Play football until football season is over and then come play baseball,’ but give the uniqueness of the year, I’m just trying to be as gracious and flexible as a I can with all situations,” Hall said. “I could’ve been mad about it, and maybe 10 years ago I would’ve been, but given the state of affairs, we’re going to deal with it.”

Hall added that he didn’t cut anyone from the freshman, junior varsity or varsity level baseball teams at Wilson this year, and that he wants them all to get a chance on the field.

“It’s kind of my responsibility to make sure we get them in,” Hall added. “Sometimes that means we don’t have the strongest group on the field, but what are you going to remember in 10 years?”

McLaurin said he’ll remember last Friday for the rest of his life, but it wasn’t that much different from a typical day where he might be at baseball and football practice from 1:30-8 p.m.

After packing his football bag with all of his equipment, McLaurin took it behind the dugout at Skip Rowland Field at 1:30 p.m. to warm up for the baseball game in which he’d start in centerfield. 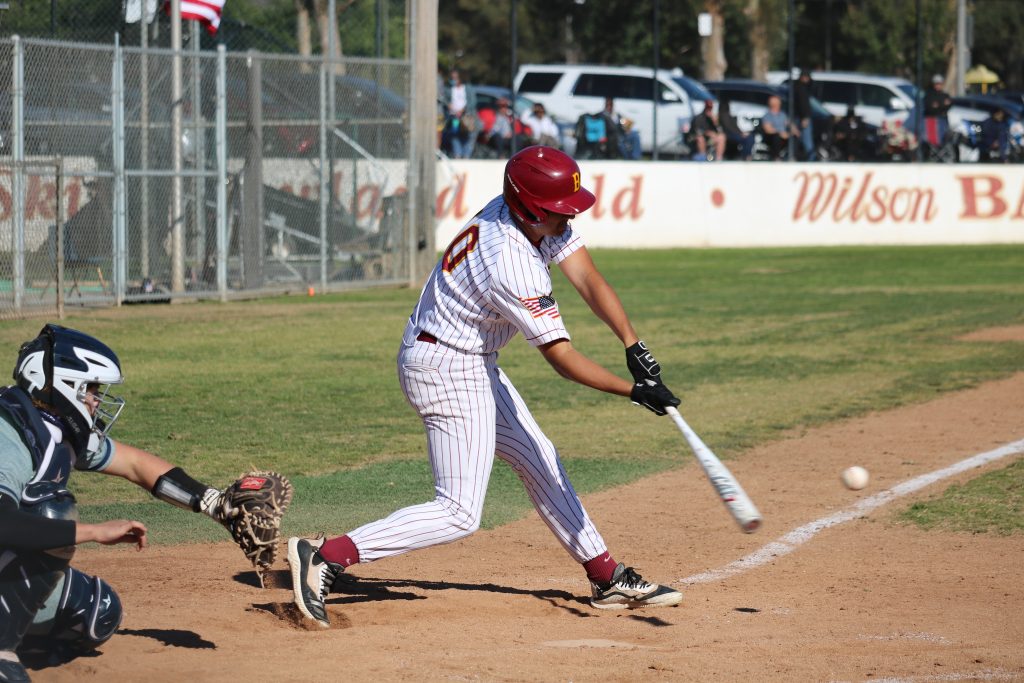 “Xander is as athletic as anyone I’ve ever coached and that’s saying a lot,” Hall said, comparing him to current New York Yankees outfielder and Wilson alum Aaron Hicks. “Hicks was probably the most athletic guy I’ve ever coached. But Xander, as far as foot speed, hand-eye coordination and arm strength… he’s just super dynamic and he’s fun to watch.”

McLaurin also pitches for the Bruins, but when he was asked to warm up in the bullpen in the fifth inning on Friday, he reminded his pitching coach that he couldn’t because of the football game.

“They’re just trying to do what they love to do,” Hall said of McLaurin and fellow baseball/football player Elijah Willkins (pictured below), who also dressed out for both games and is a prominent special teams player on the football team. 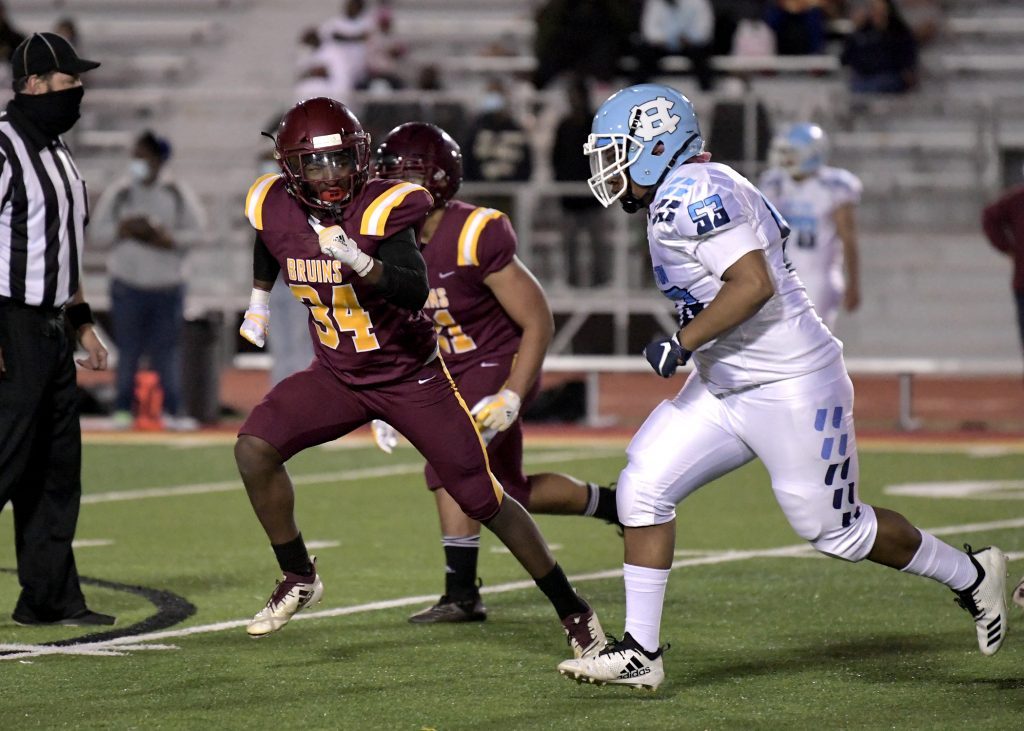 McLaurin and Wilkins knew before the baseball game started that they’d have to leave for the football pregame at 4:30 p.m., and they were welcomed by some excited teammates in the locker room.

“We were in our pregame meeting and he came in with his bags, in uniform and with a cut on his knee from sliding and the kids pumped him up because he’s a well-liked kid,” Ziegenhagen said. “I asked him, ‘How many hits you get?’ He said, ‘I was one for two,’ and I said, “Well, you have to thrown more touchdowns than you had hits today.’”

Ziegenhagen and Hall both agreed that McLaurin’s mild-mannered personality has made it easier for him to split his time because his teammates like him so much. But even with all of the support, McLaurin said he was nervous going into the football game against Compton.

“It was a little nerve-racking at first but once I got hit, it felt natural,” McLaurin said.

It was an up and down start for McLaurin, who completed 10 of his 21 pass attempts for 148 yards, three touchdowns and two interceptions. But he finished strong and the last touchdown was a 25-yard fade to All-Moore League wide receiver Michael Bruner with less than two minutes to play that gave Wilson a 27-26 victory.

Charles McLaurin said it was a thrill to watch his son compete again.

“He’s a humble kid who gets good grades in his AP classes and he’s very coachable,” Charles said. “I’m very proud of him.”

McLaurin, who is still growing into his 5’11” 180-pound frame, said he dreams of playing both football and baseball in college where he wants to study computer science.

“I just want to play as much as I can,” McLaurin said. “We even had a baseball game on Saturday morning at El Segundo. I got about eight hours of sleep, but I was sore. My arm was sore from throwing so much and my legs and back hurt but I just had to power through.”

Unfortunately, McLaurin pitched two scoreless innings before giving up a game-tying home run in the seventh inning, and the Bruins lost in extra innings just like they did on Friday after McLaurin left for football.

“It’s definitely a crazy different situation we’re all living in now and we’re just trying to make it work in a way that benefits the kids and can keep us somewhat sane and get some normalcy getting going again,” Hall said.

So, what does a high school kid do after they’ve played two baseball games and a football game all in a 24-hour span?

“I went home, showered and took a nap,” McLaurin said. “I was tired.”

Congratulations to our Athletes of the Week, presented by Naples Rib Company. HIGH SCHOOL Keyonta Lanier, Long Beach Poly Football Long Beach Poly receiver Keyonta Lanier earned his nickname of “Big Play Tay” with a pair of touchdown catches for the Jackrabbits in their big win over Lakewood. Lanier, a senior, is a New Mexico […]

A History of the Long Beach Poly/Wilson Football Rivalry

With the 88th incarnation of “The Big Game” taking place this Friday, it’s time to take a look back at the city’s oldest rivalry. Long Beach Poly and Wilson have been playing each other annually since 1932, making the series older than 26 of the 32 NFL franchises. The two teams first played in 1932, […]

The Eric Valenzuela era starts this weekend at Bohl Diamond at Blair Field when the Long Beach State Dirtbags host Cal in a season-opening series. LBSU’s historic baseball program has been significantly slowing down since hosting the 2017 NCAA Super Regional. Last season was doomed by a record-worst start and midseason firing of coach Troy […]