The news that Long Beach State had received permission from the city of Long Beach to bring back 10 spring sports transformed a lot of preparation into action, and longtime employee Mark Edrington is representing the athletics department on the COVID-19 action team.

“Our situation is constantly fluid,” Edrington said. “With safety in mind you have to check and double check things that you took for granted before COVID.”

Edrington is a Senior Associate Athletic Director who works primarily with on-campus facilities. He currently serves as the General Manager of the Walter Pyramid, and that background has helped him plan for reopening a variety of buildings.

“As we repopulate our teams back to our campus with facilities, we also have to reach out to our campus support partners because they have to support activity that hasn’t happened,” Edrington said. “From a safety standpoint any activity outside has more open-mindedness than anything happening inside, obviously. Outdoors, its easier to put these plans together.”

“Everybody is lifting a lot of weight, but Mark’s job is critical,” LBSU athletic director Andy Fee said. “He makes this flow of work connect and move along and if he doesn’t, it comes to a grinding halt.” 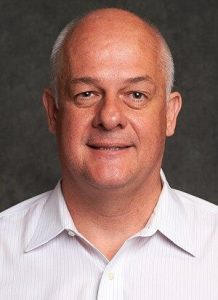 Edrington took over this effort in December and within a month he needed to disseminate new information and protocols to the teams. He even made a Powerpoint presentation to show the student-athletes how different their experience would be without locker rooms and coaches wearing masks.

Edrington is also dealing with more input than most other people in positions like his. The NCAA and Big West Conference has their guidelines, and then he has to meet with city heath officials every week for updates.

“It’s kind of enough to drive you crazy,” Edrington said. “It took awhile and it took perseverance because of where we’re located geographically in Long Beach. We review everything like out testing cadence, our practices, our safety protocols and then things that just come up and throw a wrench in. We have to be fluid and adjust.”

Part of the plan involves a daily check-in with all of the student-athletes, coaches and staff for the baseball, softball, men’s volleyball, women’s water polo, women’s tennis, beach volleyball, both track and field and both men’s and women’s golf teams. That will involve an online questioner and a temperature check where they’ll get a wristband like any essential worker on campus would receive.

Edrington also said the university is looking at a plan to make testing a little bit more affordable.

“We’re working with the team physicians and our trainers so there’s lots of moving parts on that,” Edrington said. “We had to identify the testing partners and manufacturers that supply the testing kits. We had to get that approved by the campus… Eventually we’re going to be able to do our testing at the (Walter) Pyramid for our student-athletes.”

Edrington added that the coaches are going to adjust the most with all of the new rules and regulations.

“We certainly don’t have the staff to be at every single practice at every single facility to wipe balls down,” Edrington said. “Our coaches have been great because we’re asking, ’Not only do we need you to coach, we need you to be our eyes and ears out there making sure people are wearing their masks, social distancing, wiping balls down and all of the details involved in our safety plans’.”

Mike Marjama made his Major League Baseball debut less than a year ago, but the former Long Beach State Dirtbags catcher has decided to hang up his cleats and give back to a community that also shaped his life. “I am more than an athlete,” Marjama wrote in his official retirement letter released via Twitter. […]

NCAA Baseball Long Beach State Dirtbags vs. No. 9 Ole Miss Blair Field After splitting a mid-week series with Arizona State, the Dirtbags (3-6) are back at Blair Field as part of a six-game homestand. Friday’s 6 p.m. game has been rained out, and there will be a double header on Saturday. Game 1 is […]

Long Beach State Athletics Director Andy Fee talks about the ‘State of the Department’ and we catch up with water polo coach Gavin Arroyo to congratulate him on his USA Water Polo Hall Of Fame induction. Beach Athletic Fund on Twitter 🚨State of the Department🚨 with @TheAndyFee tonight at 5:30 pm. Check your 📩 for […]