“In this one you throw the records out of the window,” Wilson coach Mark Ziegenhagen said. “This has been a close and physical game for the last four years, so our guys know they need to be ready.”

The Lancers haven’t beaten the Bruins since 2014, but the last two games have been one-score contests. Wilson won a 31-28 overtime thriller in 2017, and edged Lakewood 36-30 last year.

This game could end up deciding second place in league since Lakewood (4-3, 3-0) still has co-league leaders Long Beach Poly left to play on the schedule.

Wilson (7-1, 3-1) bounced back from its loss to the Jackrabbits with a blowout win over Jordan last week. Senior quarterback Ryan Pettway found Clint Stephens for a pair of scores, and also threw touchdowns to Wesley Easter, Tyler Mort and Tyrie Robinson in the win. That gives Pettway 24 passing touchdowns this season, and 48 in his three years as a starter. Pettway also went over 4,600 career passing yards last week.

“They’re really good and I don’t see any weaknesses,” Lakewood coach Scott Meyer said of Wilson. “We have to play really well and keep their offense off the field by putting some drives together. We want to keep it close and make it a battle going to the fourth quarter.”

Lakewood is on a three-game winning streak thanks to the heroics of its own signal caller. Junior quarterback Gevani McCoy has a 101.1 passer rating this season, according to MaxPreps, and also has six rushing touchdowns. CLICK HERE to read more about McCoy.

Meyer and Ziegenhagen are both longtime members of the Long Beach football community, and they agree that the future of local football will rely on keeping on-campus coaches like themselves.

“He’s got good on-campus coaches at the lower levels and his staff has stayed pretty much intact,” Meyer said of Zigenhagen. “Continuity sure does go a long way.”

Meyer will also have a familiar feeling when he arrives at Wilson on Friday where one of the athletic facilities on campus is named after his grandfather. 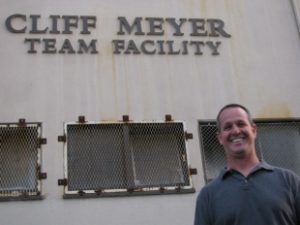 “To see your grandpas name on the back of the stadium, and on the baseball scoreboard, always brings back some good memories and makes me think about my grandparents, my parents and all of that,” Meyer said. “It won’t be super emotional, but it will bring back some family memories for sure.”

Meyer’s grandfather, Cliff, was the captain of that inaugural 1926 Wilson team, and was the coach of the first Wilson team to beat Poly. His father, Jon, is currently the LBUSD School Board of Education representative for Wilson’s district. Meyer also sent his eldest son, Nick, to Wilson. Meyer left Jordan to coach the Wilson defense in 2010 when then defensive coordinator Ziegenhagen left for Huntington Beach.

PODCAST: Who Is The Best Football Player In Long Beach?

The stars were aligned for Wilson softball on Tuesday at Lakewood High. The Bruins had their senior leader in the circle, and at the top of the lineup. They also had the middle of their lineup swinging hot bats, and they had the extra motivation that they hadn’t beaten Lakewood since 2012, the last time […]

Long Beach Poly baseball made history on Wednesday afternoon against Wilson at Bohl Diamond at Blair Field thanks to a phenomenal pitching performance from senior Jesse Simon, and a first inning single from shortstop Chris Murphy. The Jackrabbits took an early lead and never let the Bruins up off of the mat in a 2-0 […]