Millikan is the only Long Beach playoff team hitting the road in the first round of the CIF-SS football playoffs next Friday. Not only that, the Rams will have to knock off the top seed in Division 6 to keep their championship hopes alive–Millikan will head north up the 101 to take on the Camarillo Scorpions in its playoff opener.

“I think we’ll be in good shape,” said Millikan head coach Romeo Pellum, who will be making his first postseason appearance as coach of the Rams. “We’re coming out as the underdog and we’re going to take it one game at a time. It doesn’t matter if you’re the one seed or the 16 seed, you’ve got to play everybody anyway, so we can figure it out and get this thing done.”

Camarillo also posted a 6-4 overall record including a 2-1 league record to finish second in the Camino League. The Scorpions lost their regular season finale, 38-7, against league champs Bishop Diego, a quality opponent that ended up in the Division 2 bracket this season.

An early scouting report on Camarillo shows that they love to throw the ball with junior quarterback Brody Meyer. He averages over 187 passing yards per game and has 18 TDs through the air this season to go with 11 interceptions. His top target is 6-foot-3 junior wide receiver Jack Maulhardt, who has 38 catches for 679 yards and a team-high 10 touchdowns on the season.

Millikan’s strength is in its defensive secondary, as well as the depth of playmakers and home run threats on both sides of the ball. Arizona-bound corner/wide receiver Tacario Davis anchors that pass defense and seems like an obvious counter to Camarillo’s top offensive weapon.

“It’s pretty obvious we have more athletes than those guys, and we like teams that pass the ball because that’s our strength,” Pellum said. “And Tacario will follow (Maulhardt) wherever he’s at, and I know Tacario will win more than he loses.”

Looking through the rest of Division 6, Millikan has already played Santa Ana, who will open their playoff run against Mayfair in the other half of the bracket. The Rams dropped the season opener against Santa Ana, 48-41, back on Aug. 20. The bracket also includes other nearby teams like North Torrance and Dominguez.

However, Pellum said his focus is on the challenge ahead, taking care of business against the No. 1 seed in the bracket.

“No matter the division, everyone knows we can compete with these teams,” said Pellum. “But I will tell our kids that they think you’re the worst team (in the bracket), so you guys have to go out there and prove it. I don’t know when the last time a 16 seed won the championship, but we’re gonna try to hit that landmark.” 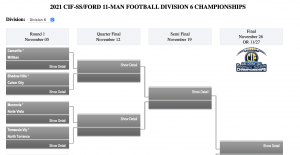 CIF Volleyball: Millikan Swept By O Lu In Second Round

Long Beach Millikan made its first appearace in the second round of the playoffs in several years on Saturday, traveling to face Orange Lutheran in a Division 3 matchup. Unfortunately their playoff journey would end there after losing in three sets, 25-16, 25-23, 25-20.  The Rams came out strong in the first set but ended […]

A hot start and a stressful finish delivered a Homecoming win for St. Anthony football at Clark Field on Friday night. The Saints scored the first three touchdowns of the night against visiting La Salle, and then held off a late charge by the Lancers in a 27-21 victory. “We hung on,” St. Anthony coach […]

We’ve got some great shots of the Bruins’ win over the Lancers taken by photographer Stephen Dachman.