It felt like the Jordan football season was over.

The Panthers were training 21-6 at halftime of their CIF Southern Section Division 11 quarterfinals at Granite Hills last week, and senior running back Damian Henderson had been taken off the field injured. That’s when coach Tim Wedlow walked over to sophomore running back Jordan Washington.

“I told him at halftime that, ‘You’re going to have to carry the load because Damian is banged up.’ He just gave me this look and said, “Okay coach, I’m going to do it.’ He stepped up like a senior even though he was tired. He ran until he ran out of gas.”

Washington used his incredible speed and tenacity to run for three touchdowns while leading Jordan to a dramatic comeback victory that put the Panthers in their first ever CIF semifinal. They host Twentynine Palms tonight.

“I didn’t care if I was tired, and I was dying man, but I stayed on the field because I wanted to win,” Washington said. “I had to put the team on my back this time.”

That veteran approach from a sophomore is rare, but Washington has already gone through enough in his life to have earned that maturity while a mixture of therapy and guidance has provided assistance.

“Through all of the success he’s been having it’s just Jordan being Jordan,” Jordan High track coach Sharaud Moore said. “He’s a real down to earth kid. He works hard and has the respect of his peers. A lot of star athletes don’t have that. They have admiration. But with Jordan they respect him.”

Washington has always considered himself a football player. He started playing organized ball when he was five-years old and his natural speed made him an instant star.

“I used to try and run down the field with him, but not for that long,” said Washington’s mother Tracey Brown. “He could take off and nobody could catch him.”

After being born in Riverside, Washington and his mom were forced to move and bounce around the greater Long Beach area when she and his father split up. Washington said he went to multiple schools and never felt like he fit in because of the frustration that lived inside him.

“The stuff at home I took with me to school,” Washington said. “I didn’t bother anybody, but as soon as they said one thing to me it was a fuss. I had a short temper.”

Washington was getting into too many fights at school, but no one was confused as to why.

“We were homeless for a while and stuff like that,” Brown said. “Us being put out on the streets bothered him a whole lot. He was 12 years old. His mother and father weren’t together and his brother was going to prison a lot and he cared a lot about his big brother.”

Brown and Washington’s teachers decided it would be best for him to start therapy. They both said the positive results were immediate, but it took Washington awhile to be comfortable with this newfound outlet.

Washington added that he didn’t want to share his situation with anyone.

“I hid it for a while and didn’t tell other kids I was in therapy or what I was going through,” he said. “I didn’t want them to know about my past like that. People sometimes use your past against you to hurt you.” 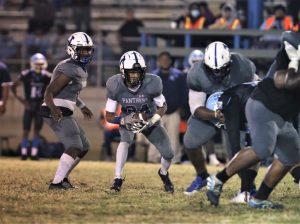 Those worries faded away after a few sessions when Washington realized he wasn’t as upset anymore.

“Therapy helped me through all of that type of stuff and it’s a good way to blow off steam,” he said. “Talking things out has helped me. I want to talk it out instead of letting it out with anger. I used to solve my anger with fighting, now I blow off steam through conversations.”

Washington still goes to therapy and isn’t afraid to talk about how it’s helped him and his relationship with his family.

“It’s cool now… I understand at the end of the day I know who I am so people can’t hurt me anymore,” he said. “I matured and became a better person over time. I learned how life should work.”

Finding an inner calm allowed Washington’s natural athletic ability to flourish at Lindbergh Middle School where he broke the 100 meter record as a new track and field runner.

“It was the unbelievable talent he had but a very humble spirit,” Moore said of meeting Washington for the first time. “I don’t think he realized how great he was.”

“The turning point (in my life) was just me playing sports,” Washington said.”I got extra help from people. During my stressful days and my depression I turn to sports and that’s the only thing that’s been my stress relief.”

When Washington arrived at Jordan High last year during the COVID-19 shutdowns, coaches like Wedlow and Moore were there to put him on the right path.

“He was accustomed to being a good athlete but didn’t understand there’s so much more to being a good athlete than just showing up on game day,” Moore said. “In the spring we sat down and had a heart to heart and explained what it means to grow up and be responsible. He started studying more in the classroom and on the track. He was able to communicate more… I looked up one day and Jordan is behaving like a man and a leader. He’s pushing his teammates to do better and he’s quietly becoming one of the best athletes we’ve had on our campus in a long time.”

Wedlow agreed that he’s seen a lot of growth from Washington in a short amount of time, and that has earned the respect of his teammates even though he’s younger than most of them.

“He plays like he’s a senior,” Wedlow said. “(His teammates) can’t wait for him to get into the open field because they know nobody is going to catch him. And he loves the hype when everybody is cheering him down the sideline going for a touchdown.”

“It’s very humbling,” Washington said. “I didn’t expect all of this.”

“Any coach who says they made Jordan Washington into what he is today is a liar, myself included,” Moore said. “He’s just a blessed kid. But what he’s doing now is working. He’s got guys like me or Wedlow who will call him out on stuff. We tell him to get out in front and take your place and recognize who you are and honor the gift he has because it’s not going to have it very long.”

GET TO KNOW JORDAN WASHINGTON

Question: What is your favorite food?
Answer: Chicken Alfredo.

Q: Do you have a favorite TV show?
A: All-American on Netflix. I like how it’s representative of the black community and an African-American football player and how he struggles to get to the top. And when he gets to the top there’s a lot of hate towards him, but he still continues to fight for his people.

Q: How about a favorite movie?
A: Spiderman. The first one. I grew up watching that one. The villains were better.

Q: What’s your favorite class in school right now?
A: Geometry. Math has always been my strength. It makes more sense than the other classes I take.

Q: Do you have a favorite book you’ve had to read in school?
A: The Outsiders. I was flabbergasted. I didn’t expect anything that happened. It was sad and crazy, especially at the end. I’m interested in mystery books and all of that. I always like to be shocked.

Q: Who do you think is the funniest person on your team?
A: Damian (Henderson) He’s a good guy. The stuff he says isn’t PG but it’s funny and he has a good attitude. I love that kid, he’s great.

Q: You said you watch a lot of football, so do you have a favorite player?
A: John Ross. I watched Ross in college and in the NFL. I like how shifty he is and his speed. He’s like me. He didn’t really run track but is blessed with incredible speed. I can see how I can use my speed like he used his at the next level.

WCA Club Football: Team Grind vs TTP Highlights from Team Grind against TTP from January 16, 2021 in Chino.For more coverage of all Long Beach sports, head to www.The562.org. We are a non-profit… Support The562.org

The state’s longest league championship streak will be on the line again this year, as Wilson tries to win a 47th consecutive Moore League title. The Bruins are led once again by a coach steeped in the tradition of the school’s storied aquatics program, Eric Berg. “We were lucky that the top seniors that graduated […]