A few weeks before Shea Kuykendall was set to start his freshman year at Long Beach Poly, the quarterback made a bold proclamation to coach Stephen Barbee.

“Coach, I’m going to be the first four-year quarterback here since Chris Lewis,” he said.

Barbee chuckles about the story now.

“It tells you something about a kid’s confidence, for sure,” he said.

Kuykendall did not, in fact, go on to start for the Jackrabbits as a freshman. But he did start as a sophomore and a junior and now, in his senior season, is powering Poly’s run through the CIF Southern Section Division 4 playoffs. Kuykendall is having his best season and has taken another leap in the playoffs. In the Jackrabbits’ first two games they’ve scored 105 points as Kuykendall’s line has been a combined 41/54 765 yards and nine touchdowns.

This week he was named one of Cal-Hi Sports offensive players of the week in the state of California for his efforts in a five-touchdown 49-3 win over Upland on the road in the quarterfinals. This week, the Jackrabbits host Cypress in a semifinal game at Veterans Memorial Stadium at 7 p.m.

According to Kuykendall, there’s no magic behind the leap he’s taken in his senior season, as he’s piled up 2,300 yards on a 71% completion rate with 30 touchdowns against just two interceptions. The jump has simply been the result of hard work.

“It’s just been lots and lots of film,” he said. “I really tried to just break everything down obsessively, and this year everything just feels like it’s moving way slower. It almost feels like playing a video game, honestly.”

Kuykendall has always had an arm and he’s always been tough when he pulls the ball down and runs it, but as a younger signal-caller he faced familiar challenges. He’d try to do too much and force throws into coverages, or he’d feel pressure around him and pull the ball down too early. Those former flaws have been nowhere to be found over the last two months. 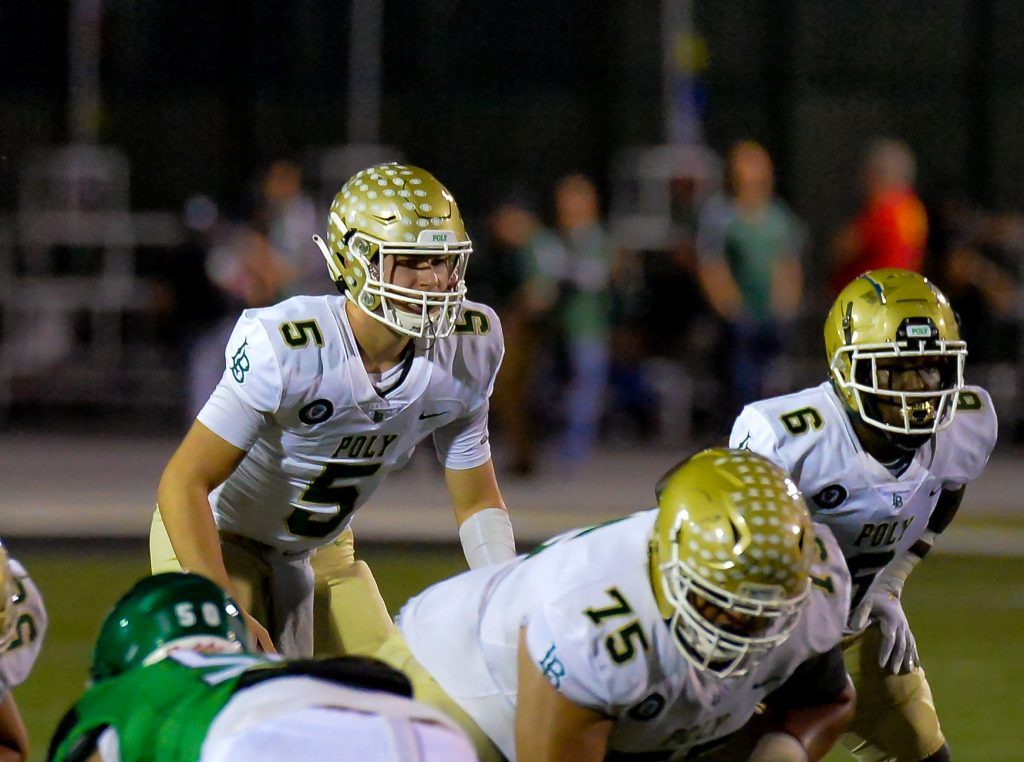 “He’s really progressed a lot, and you can see how much he’s grown as a game manager, too,” said Barbee. “Trusting his line, trusting his receivers, taking what’s there and making the right decision every time. Before he’d sometimes try to put everything on his shoulders–this year he’s really come into his own.”

Kuykendall said that developing trust in his teammates this year has been a big part of the offense’s success as well. “Trust” is a word that comes up often with high school quarterbacks, and Kuykendall’s trust in the Jackrabbits program has been admirable. Poly has had other players push Kuykendall for playing time every year he’s been a starter, and at no point did he transfer, or even consider it. Some QBs would have been threatened by the offseason arrival of sophomore Darius Curry, a young QB with some big scholarship offers.

Kuykendall took the opposite approach, and blew coaches away with how well the two got along during practices and how easily they worked together.

“I have self-confidence and I know how hard I’ve worked,” said Kuykendall. “I was excited to be able to mentor someone and I think it actually helped me a lot as a quarterback as well. That helped slow things down for me even more–I’d see him doing things sometimes that I know I was doing as a 10th grader.”

Barbee’s been impressed by his senior leader’s mindset and resolve, as well as they way he’s worked to become a college-ready QB.

“It’s all work, the constant in that kid for the last four years is that he’s worked,” he said. “A lot of guys might pack it in when a new quarterback comes in, and he never shied away from anything. And the guys see that–you want a fighter leading your team.”

After four years of dreaming about playing in a championship game for Poly, Kuykendall is one win away. The good news, he says, is that although Poly has been dominant during the playoffs, the team isn’t satisfied–and he thinks they have room to get better.

For a quarterback with Kuykendall’s work ethic and resolve, it’s likely that he hasn’t hit his yet either.

We’ve got some great shots from the oldest rivalry in Long Beach courtesy of our friends Art O’Neil and John Napalan of All-In Press.