Because they were staying at the same Las Vegas hotel during the conference tournaments, Monson met with Gonzaga coach Mark Few and they talked about how the Zags take every Monday practice to work on their mental preparation. One of the Gonzaga assistant coaches volunteered to talk with the Beach players before the CSUN game, and the results were immediate.

Monson has taken that idea and created Mental Mondays for LBSU. Instead of another hard practice, the players listen to guest speakers and talk about playing the game above their shoulders.

“As a program that’s struggled you’ve got to understand that the game has changed and if you want to stay in it you’ve got to change,” Monson said. “Last year with COVID and everything, so many of our problems were mental.”

They meet with a sports psychologist every other Monday, and even LBSU men’s volleyball coach Alan Knipe has come to talk with the team about creating a better culture with intelligence and accountability.

“The discipline has been the biggest shift I’ve seen since I’ve been here,” said senior Drew Cobb. “(The coaches are) holding people accountable for everything and anything. It could be the slightest thing like not answering a group text when everyone else does. There will be a consequence in the morning.”

“I think the guys have felt it’s been beneficial,” Monson added. “We’re in a good spot mentally as a team.”

Monson has a handful of experienced senior starters to lead the way in guards Cobb, Colin Slater and Joel Murray plus forwards Jordan Roberts and Joe Hampson. This is the sixth collegiate year for Slater and Hampton, the fifth year for Roberts and Cobb, and the fourth year for Murray.

“We all want to win and we all feel like we don’t want to leave until we put something in the rafters and leave a legacy here,” Cobb said.

Despite not playing together much, these projected starters have high exceptions for themselves.

“The optimism comes from our experience,” Slater said. “We’re well versed in how to handle success and failures. Everybody is getting so much better because we all want it and we know what we have to do to be better. Even if it’s something as small as not communicating on a defensive possession we go do pushups on the side or run. That’s going to make a world of difference and it’s going to show when we play.”

Slater and Cobb are back with the team after opting out for most of last season due to COVID concerns. Slater returned to the roster midseason and came off the bench to average 8.9 points per game. Cobb missed all but three games and will be an important addition defensively.

It’s a special Men’s Basketball featured episode of the LB Fee Show! No Andy this week so instead we dive straight into the season with Long Beach State’s three captains: Jordan Roberts, Drew Cobb and Colin Slater. Fun conversation with a lot of great info on the season, which is just around the corner!

Murray is a transfer from West Texas A&M where he averaged 23.5 points per game last season while leading his team to the Division II championship game.

“He comes in and goes to work like this is his job everyday,” Cobb said of Murray. “He’s going to surprise people.”

Hampton (pictured above), who gained national notoriety after being featured in Netflix’s Last Chance U during his time at East LA College, was a much-needed addition down low last season. The 6’8” 235-pound forward averaged 10.3 points and 4.1 rebounds in 17 starts, and will be the biggest key to rebounding better. LBSU was last in the Big West in rebounding last season. 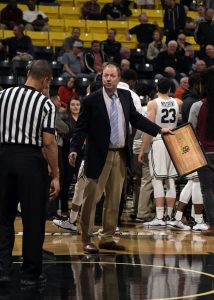 “We won’t beat anybody if we don’t win the rebounding battle because we’re going to play smaller than we’ve played,” Monson said. “We have to sure up the boards and inside play with numbers and not with certain bodies.”

Sophomore Romelle Mansel and freshman Jadon Jones will be the first guys coming off the bench, and both of them can help rebound. Jones, a St. Anthony High alum, is coming off a breakout first season at LBSU during which he was named to the Big West All-Tournament team. He had 19 points and 11 rebounds in the win over CSUN.

Monson also said that he’s very excited about his freshman class and is trying to work them in with the experienced starters.

Freshman AJ George averaged 24 points and eight rebounds as a senior at Hoover High in Fresno a year after leading his team to the CIF Central Section championship as a junior. The 6’6” 190-pound freshman forward has already impressed his new teammates.

“He reminds me of myself when I was a freshman,” Roberts said of George. “I’m trying to help him pave the way and stay focused so he can change the culture around here.”

George injured his shoulder in the exhibition game and won’t travel with the team to start the season.

Fellow freshman AJ Neal comes to Long Beach as the No. 136 prospect in the nation, according to 247 Sports. The 6’1” 180-pound guard averaged five assists per game at West Oaks Academy in Florida last season.

“He’s always eager to learn,” Slater said of Neal. “He’s a sponge and he was great in high school so I’m excited to see what he does here and I know he’s going to be special.”

“I think we mesh together very well,” said Roberts, who is the active LBSU career leader in points, rebounds, assists, blocks and steals. “Even the young guys, they’re very mature for their age in handling themselves on and off the court.”

Last season, 12 different LBSU players missed a game due to injury so Monson and his coaching staff are trying to limit physical practices to stay healthy.

“We got down to three or four scholarship players last year,” Monson said. “But we went from not even having 10 guys to practice to having one of the deepest teams I’ve ever had so we’ve got a lot of guys ready to go.”

Last week, LBSU welcomed fans back to Walter Pyramid for the first time since March 2020 with an 82-65 exhibition win over Biola. Slater scored a game-high 17 points while Murray chipped in 14. Jones came off the bench to score 13 points in 13 minutes. Hampton played twenty minutes and had 11 points and 9 boards.

The Beach opens the regular season at Idaho on Wednesday, and will try once again to play UCLA at Pauley Pavilion on Monday after the last-minute COVID-19 cancellation last year. LBSU will host Utah Valley for the home opener at Walter Pyramid next Wednesday.

LBSU hasn’t finished above fourth place in the Big West since 2016, and hasn’t won the conference title since 2013— a year after their last trip to the NCAA Tournament. LBSU also hasn’t reached the conference tournament final since 2016, which was also the last time the Beach finished over .500 for the season.

Monson, who is in his 15th season at LBSU, hopes a return to normalcy this year can get his program back on track.

“COVID sucked but it gave us some perspective about not taking anything for granted,” Monson said. “Just being in the locker room together or lifting weights and being excited about it… Those were things that were taken away from us. Having people at the scrimmages and at the game Friday night, it just feels great to do what we love and to be able to share it with people again.”

After two weeks of action here’s where things stand in the Long Beach boys’ basketball world with a list of this week’s games below the standings box. Note: Standings based on reported results. Coaches can report scores/weekly results as well as schedule listings to Mike@The562.org. — Moore League Wilson 0-0 4-1 386 344 Jordan 0-0 […]

The Long Beach State women’s basketball team played USC even through the first half, then saw the game slip away in the third during an 11-0 run for the Trojans. Long Beach battled back and won the fourth quarter by four points but ended up losing a tight one, 71-65. Naomi Hunt continued her excellent […]