All of The562’s cross-country coverage for the 2021-22 school year is sponsored by Bryson. Visit BrysonFinancial.com to learn more.

There’s been little doubt all year that the dominant forces in the Moore League boys’ cross country world are Millikan sophomore star Jason Parra, and the Long Beach Poly boys’ team. Tuesday’s Moore League cross country meet at Signal Hill did little to dispel those notions, as Parra blazed his way to an easy individual win and the Jackrabbits had the next four finishers, as well as five of the top eight. Wilson’s Nico Colchico, the second-place finisher at El Dorado two weeks ago, sat the race out due to a minor back injury, but said he’s planning to race this weekend at the Mt. SAC Invitational.

Parra’s time of 16:03 was 17 seconds faster than his next-closest competitor. While it was not a new Moore League record at Signal Hill (Poly’s Aaron Durham broke 16 minutes in 1999), it was the fastest time of this century. Parra set a new record at El Dorado two weeks ago and said his goal was to put his name at the top of all the record books in town.

Parra went out so fast and looked so comfortable on Tuesday that it had to be asked–is he such a glutton for punishment that he actually enjoys hills?

“I don’t *like* hills, but I’m good,” he said with a laugh. “I don’t think anyone likes hills, but I enjoy the experience and being tactical with my approach.”

As usual, Parra went out fast and dared anyone to try and keep up with him. Poly’s Robert Guerrero ran with a pack of teammates then broke off to give chase to Parra. He was able to push him through the second lap around the hill before Parra broke away for good.

“I was expecting someone to be close, I didn’t expect them to be that close, but I was planning to keep it up the whole time and not let them catch up,” said Parra.

Parra’s performance was stellar, but Poly won the team title thanks to that strong pack running. The Jackrabbits, who also won the team scoring at El Dorado, were led by Guerrero, Luke Larson, Cameron Rhone, and Mason Lindsay, who finished in a group. After that Eric Plascencia and Dylan Ball of Millikan finished together, followed by Poly’s Brandon Perry and Wilson’s Gus Hollister.

Millikan took second in the team standings, followed by Wilson.

“It would be nice to get the individual win, but this is cross country, it’s a team and it’s all about team scoring,” said Guerrero. “As long as we get the team win, that’s what really counts. 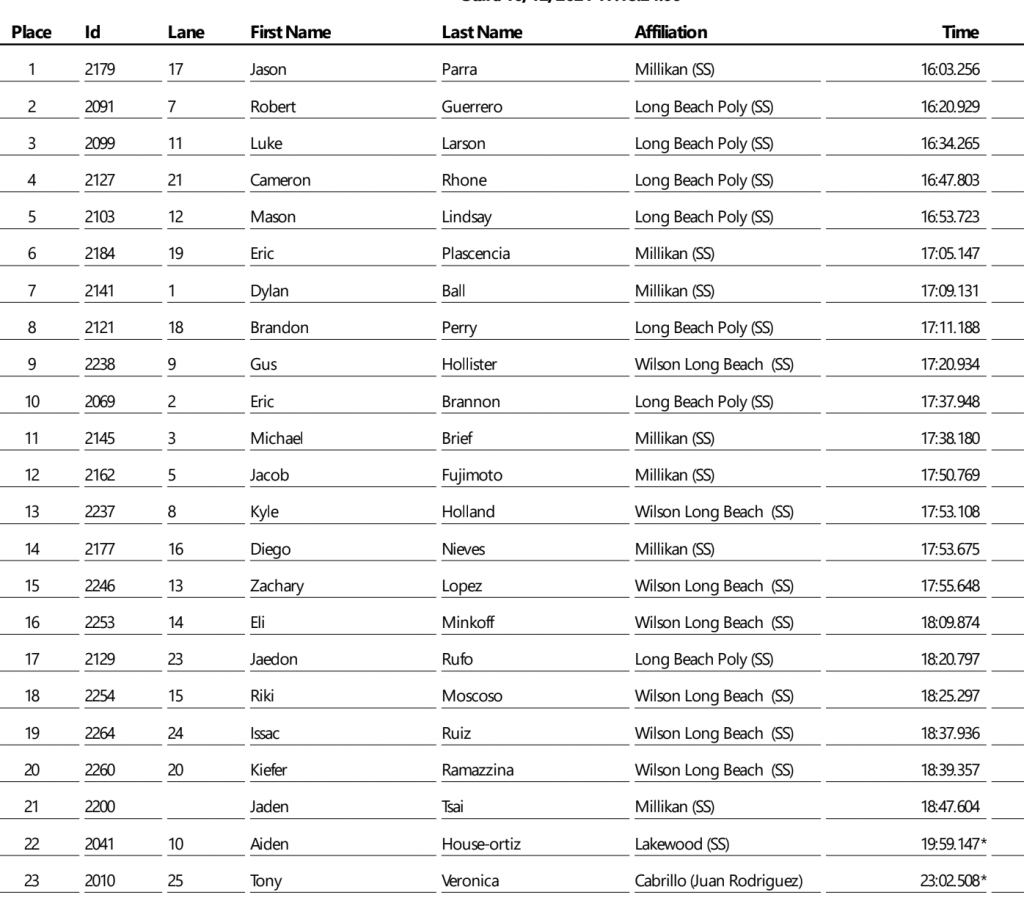 Do you have a question, comment or concern about the Los Angeles Angels possibly bringing a new Major League Baseball stadium to Shoreline Drive? You came to the right place! This week on the show we’re talking about that and much more breaking Long Beach sports news. 00:00 We sit down with LB Post reporter […]

It’s been a year of tragedy and triumph for the Long Beach Poly football team. After Saturday night’s CIF Southern Section Division 4 championship game at St. Francis, it’s a golden year, too. The Jackrabbits are playing this season in memory of longtime assistant coach Keith “Slice” Thompson, whose passing a little more than a […]