The longtime Long Beach Poly coach departed the Jackrabbits program in 2013 after 13 years as head coach and five CIF-SS Division 1 championships. He brought wins and success to a struggling Warren program, and for the last couple of years had been serving as an assistant coach at Servite, observing the Trinity League while waiting for the right opportunity to take over a program in his hometown.

This year that opportunity presented itself in the form of a call from St. Anthony athletic director Chris Morrison, who offered him the position of coaching the city’s only private school program.

“For me, I’m back home, and it’s great,” said Lara. “My phone has been blowing up–people know I’m back in Long Beach, people know me. We’re hoping to take some of that excitement around the program and around hopefully a new stadium at Clark Field, and to elevate the program to a different level.”

Lara took over for longtime Saints coach Mario Morales, who led the Saints to a CIF-SS championship in 2016. The Saints program has struggled with the things all smaller private schools struggle with, though: facilities and enrollment. Lara takes over a program with a small freshman class and around 35 varsity players.

“The biggest surprise for me was just the facilities, I realized it was really impressive the way they were surviving with the stuff that they had out here,” said Lara. “We’re trying to get some things cleaned up and we’re trying to just get the kids in shape and teach them the way we lift weights. We’re trying to put in six months of the way I like to run a program in about three or four weeks, it’s really tough.”

The Saints are hoping to break ground on a new stadium at Clark Field this Fall, and will play their three home games at St. Paul and St. Pius X-St. Matthias while construction gets underway.

The team Lara fields is talented but thin, with most of the starting lineup expected to play both ways. The Saints feature one of the top returners in the Del Rey League in senior running back Sone Aupiu, who has been an absolute wrecking ball out of the backfield for the Saints the last three years. 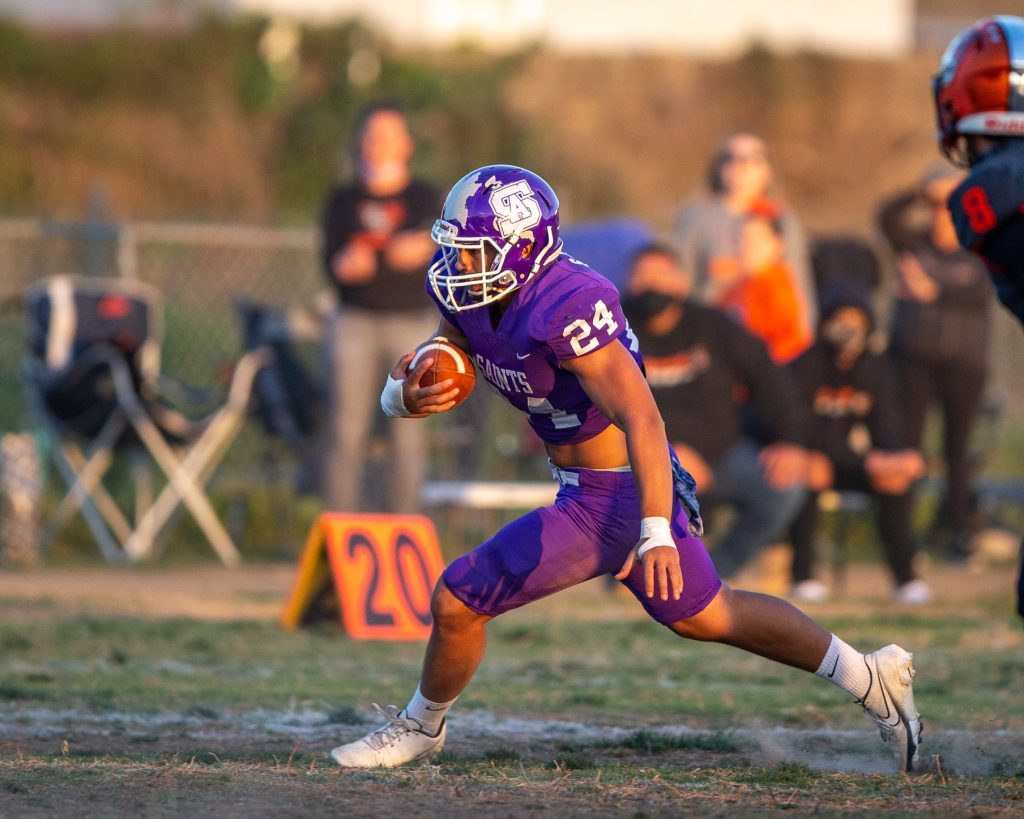 The team has a pair of players competing at quarterback after the transfer departure of last year’s starter, and Jacob Martinez and Conor Hochberg will likely both see time this year. The Saints are thin up front with just eight linemen on the roster to fill both the offensive and defensive sides of the ball, and Giovanny Damian will need to step up to help lead newcomers up front.

The skill players who will go both ways have better depth, with sprinter Dre’londe Johnson, Tyler Henry, and Ryan Norried all set to see time at receiver and defensive back. Norried said the team has embraced Lara’s work ethic and the way he’s challenged them to better themselves.

“They expect a lot from us and we’ve been working really hard,” said Norried. “I think we’ve really come together as a team and bonded.”

Norried also said he’s not worried about the Saints being thin numbers-wise.

“Most of us have started both ways for the last two years so we’re used to that,” he said. “Coach Lara’s been getting us in shape so we’re ready for that challenge.”

Lara himself is ready to embrace the challenge, too. He said that while he enjoyed his time at Warren and Servite, he knows there’s a different kind of spotlight on him in Long Beach.

Compton is one of three undefeated Moore League teams after a 2-0 start that saw them win comfortably against Compton Centennial and Santa Monica. Tonight they host a struggling 0-2 West Adams squad, with a good chance to improve to 3-0 for the second consecutive year. Jaishawn Smith has been lights out for Compton, with […]

We’ll have live updates from tonight’s high school football games with Lakewood hosting Wilson at Vets and St. Anthony traveling to Salesian. CLICK HERE for our previews of the games. Click here if you can’t see the updates. Tweets by 562sports Support The562.org