After playing just three games in the abbreviated COVID-19 Spring football season, the Jordan football program was left hungry during the offseason, eagerly awaiting the Fall and a full slate of games.

“That three games last year wasn’t enough, we’ve been waiting on this,” said senior and four-year starter Elijah Jones. “We were all glad we could play some games, it was better than not playing at all–but we’re going crazy this year, we can’t wait.”

Now entering his fourth year coaching the Panthers, Tim Wedlow can’t wait either. His Jordan squad has some real bulk up front, which has Wedlow excited for this season.

“Our strength is our offensive and defensive line,” he said. “We’ve got some dudes up front.”

Leading the way is junior transfer Sione Felemi, a 6-foot-5 330-pound lineman from Samoa who will play on the offensive and defensive line. With Saoloto Saolotoga, King Manukailea, and Kobe Coleman, Jordan is looking at multiple 300-pound linemen who can play.

Mekhi Travis will handle quarterbacking duty, with speedy sophomore running back Jordan Washington looking to have a breakout year. Jones will be a starter at receiver and defensive back, and Wedlow says he expects many of his starters will play both ways. 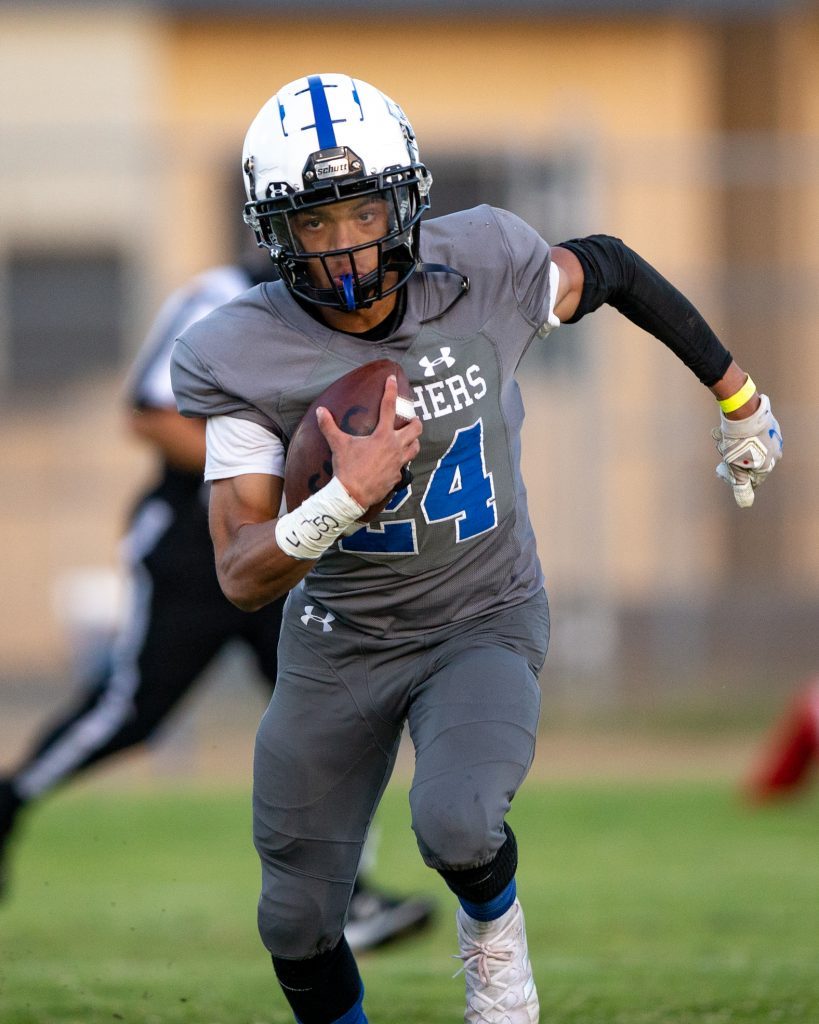 Another big piece coming back for Jordan is Jeremie McGurn, the 6-foot-3 tight end who’d transferred out before returning to Jordan for his senior year. Jacob Hernandez was a real bright spot at defensive back in the Spring, with several interceptions and big plays in each game, earning him All-Moore League honors. Hernandez is back and hoping for a big season.

Wedlow said he’s happy to see the growth in numbers in his program, and hopeful his team will get a full season this year.

“I’m dedicated to this program and so I’m proud of the growth,” he said. “I put the time in because I want these guys to really know what football is about, and to grow in life. That’s why we’re out here working with them so much.”

Wedlow said he’s hoping that with the Moore League not being as big up front as it once was, that his road pavers will make the difference as his team takes on programs with better overall numbers. Still, Jordan has seen its varsity roster pick up significantly from the Spring, and with Wedlow a well-known Campus Security Officer at Jordan, he said he expects another big uptick once the school’s students are all back on campus.

“One thing for me is I walk around and when I see someone on campus I ask them if they want to play football, or I try to get them to run track or play basketball or baseball or whatever,” he said. “I want our community to know that we have athletes here, and I want the kids who are already here to know that there’s coaches who want to help them and who care about them.”

We’ve got links to all of our coverage to end the regular season. Long Beach Poly, Wilson, Compton, and St. Anthony have all clinched playoff berths, with Lakewood and Millikan applying for an at-large bid. Playoff brackets will be out on Sunday, we’ll have live updates. Long Beach Poly def. Lakewood STORY / VIDEO / […]

July has been a busy month on the recruiting front for Long Beach footballers, as Long Beach Poly’s Alex Austin and Millikan’s Malik Bradford both committed to Pac-12 universities. Alex Austin Austin, the son of Long Beach City Councilman Al Austin, is entering his senior year and has emerged as a major recruit this spring […]

It was a frustrating opening week of the football season at Long Beach Poly, where COVID-19 positives necessitated a week-long shutdown. The Jackrabbits have been back practicing since Saturday, however, in preparation for their season opener Friday at 7 p.m. on the road against Serra. Poly also got some good news last week with three […]