But although he’s reached a new pinnacle, Caveness said there hasn’t been a ton of hooting and hollering in his household.

Caveness departs the Saints after a seven year run that includes the Saints’ first-ever Open Division appearance, a 28-4 season that was the best record in school history, and the first-ever four year stretch of quarterfinal appearances for the Saints. Caveness is replacing Bobby Braswell at Long Beach State; Braswell retired this offseason after a lengthy college coaching career.

Caveness was a successful junior college coach before accepting the St. Anthony job, and said he’s looking forward to the challenge of the NCAA level.

“(LBSU athletic director) Andy Fee has been not just great, he’s been the most incredible guy ever, and the coaches have been really welcoming,” he said. “They’ve really embraced me and made the transition easy. I have a lot of relationships in the college ranks but going through this process has been a learning experience, just sitting and talking with coaches and asking for their perspective.”

He will be reunited at Long Beach State with Jadon Jones, the All-City Player of the Year at St. Anthony who had a promising freshman year with the Beach. Jones remained a presence at St. Anthony as a volunteer assistant who still came to Bible study and other team activities.

“I don’t feel like Jadon ever really left but I’m excited to work with him again,” said Caveness. “He’s a great kid, a real Long Beach kid who cares about representing his city.”

Caveness was born and raised in Inglewood but said that Long Beach has felt like home because of how he was embraced by the city’s basketball scene.

Caveness’ hire into the college ranks from high school isn’t common, but it’s not unprecedented either. At Long Beach State in particular, the university once hired legendary Long Beach Poly head coach Ron Palmer as the head coach of the men’s basketball team. That didn’t work out, for a variety of reasons–Palmer has often cited a lack of administrative support that meant his players didn’t have priority registration so he couldn’t easily schedule practices–but Caveness is walking into the situation with open eyes and an optimistic outlook.

“I’m excited for the new challenge, obviously I want to excel and help the team,” he said. “I’m a worker, that’s how I operate, so I’ve been preparing to be as ready as possible.” 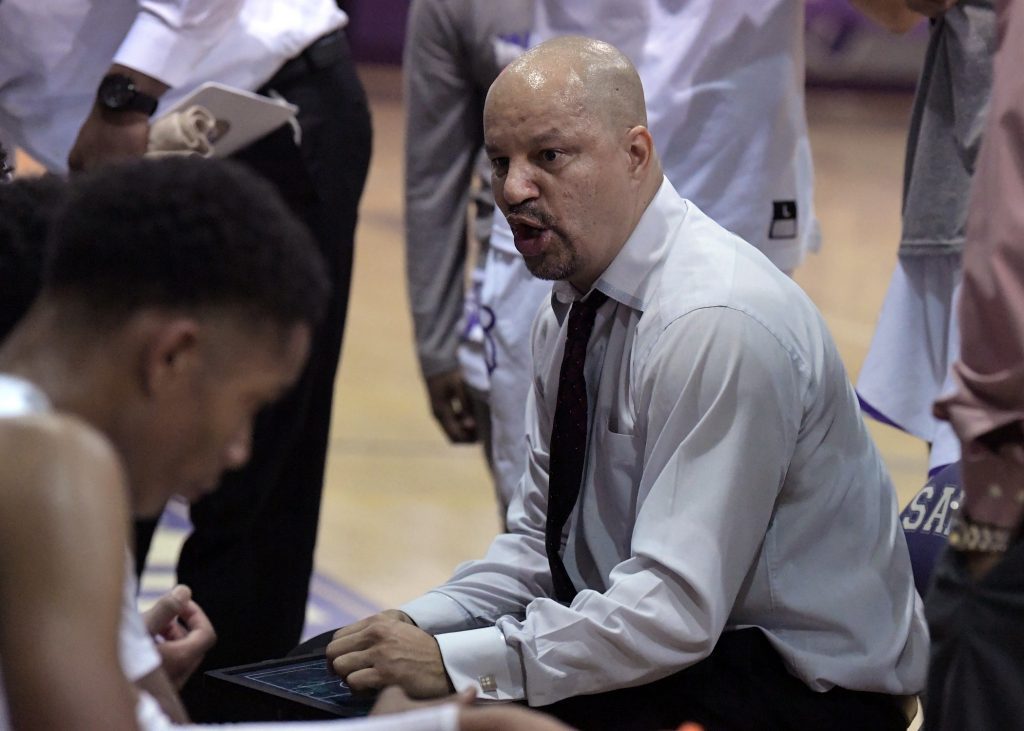 Caveness joins a Long Beach State program that last went to the NCAA Tournament in 2012, and which has struggled to develop connections with local schools to keep top talent in the city. Poly alums like Drew Buggs, KJ Feagin, and Myles Johnson have all had success in college, and all said they would have strongly considered or definitely committed to Long Beach State had they been offered.

The Beach finished ninth in the Big West last year, and haven’t finished in the top four in the conference since 2017, sliding to fifth and then eighth and now ninth place. The Beach teams have specifically lacked what Caveness’ high school teams were known for: a commitment to defense and a strong team bond. How Caveness is able to help bring those elements to a college team, especially as the new assistant up from the high school ranks, remains to be seen.

What’s clear is that Long Beach State is willing to take a chance to shake things up, and that a bright coaching talent has moved up through the ranks in the city to try and start a new phase of his career at the NCAA level.

CIF State Basketball: Millikan Runs Away With First Ever Win

The Millikan boys’ basketball team have started their last two postseason games very slowly. A huge halftime deficit was too much to overcome in the CIF Southern Section Division 3A semifinals last week, but the Rams learned their lesson and ran away from Bravo with a 79-49 first round win in the CIF State Division […]

Cal-Hi Sports’ recently updated State record book shows that Long Beach Poly’s boys’ basketball team might have as dominant a history as the school’s football teams. The Jackrabbits enter this season with 2,105 all-time victories dating back to 1907–no other school in California has more than 1,800 wins. The Jackrabbits’ co-Moore League championship in the […]