It’s hard to be nervous when you’re thankful.

That’s a life lesson that Millikan goalkeeper Savanna Alba learned over the last two years while working her way back onto the field. The senior knows that the Rams’ Moore League title defense starts and stops with her, and instead of succumbing to stage fright or self doubt, she’s embracing challenges with confidence.

“Now I have a sense of excitement instead of nervousness,” Alba said. “Now I have trust in my abilities and I want them to take a shot on me so I can save it.”

Alba will have to be on the top of her game tonight as Millikan hosts Long Beach Poly at 6 p.m. The Jackrabbits currently sit in first place in league where the Rams have been for the last two seasons.

Two years ago, Millikan was coming off of its first league title since 1991 and Alba was being groomed to become the next Rams goalkeeper when she injured her knee during a club showcase. She thought she just tweaked it and played on it for almost two months before being diagnosed with a torn ACL and torn meniscus.

“When we told her (the MRI results) when we got home I think people in the neighborhood probably thought we were hurting her because she screamed out so loud,” Savanna’s mom Jaime Alba said. “It just broke my heart. She said ‘No, no, not now!’”

Alba’s biggest concern was that she couldn’t perform during her junior year when college coaches can make contact with young recruits.

“I was devastated,” Alba said. “I thought everything was over.” 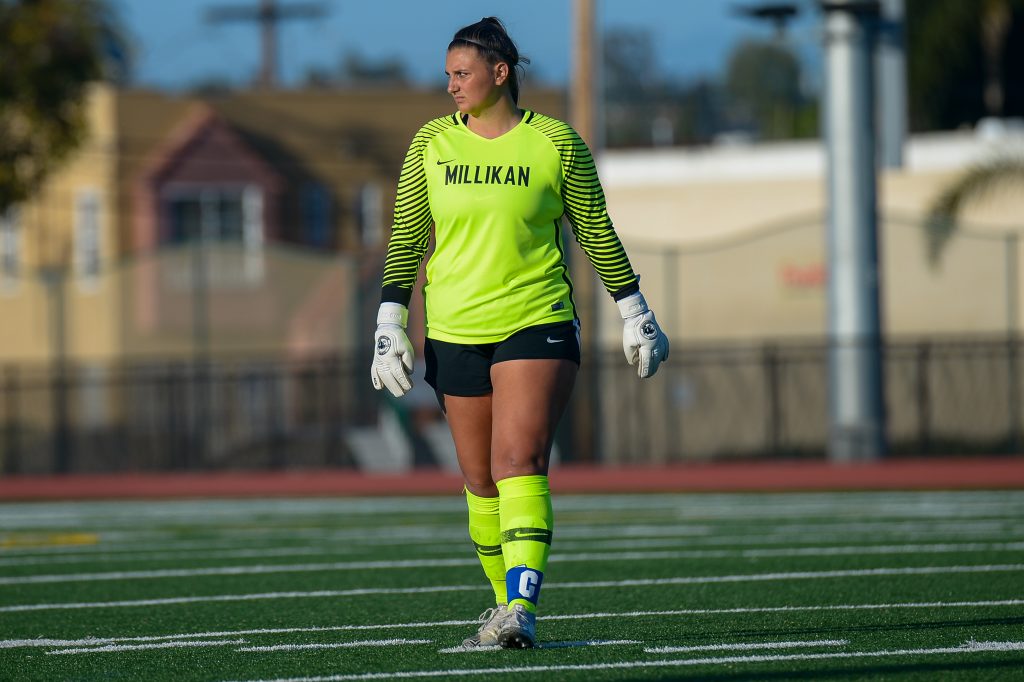 Soccer has been Alba’s passion since she joined a club when she was nine years old and a coach told her she had the talent to play college soccer. She had only been playing goalie for her AYSO team for a year because the team needed her to, but took to the position when she started figuring out how good she could get.

“I want to (play college soccer) not only for me but also for my mom because she wanted to do it so much and she couldn’t because she had to get a job,” Alba said.

Jaime said she was pleased to see her daughter choose club soccer over other activities, but that it was completely her decision.

“She was kind of a perfect kid growing up,” Jaime said. “She wanted to do and be included in everything. She loved to be social but also could be on her own and I wouldn’t have to worry about her. She could keep herself company.”

After years of learning the game by watching UCLA women’s soccer, Alba had high hopes for her recruiting process. She had gotten Varsity playing time as a sophomore, however the knee injury suffered at a club showcase in Las Vegas derailed everything.

It took the Alba family three doctors and multiple tests to finally figure out what was wrong because Savanna just kept playing despite the discomfort.

“She was fooling everybody,” Jaime said. “I think she knew and didn’t want to believe it.”

After the initial shock wore off that she could miss a whole year of club and high school soccer, Alba got some sage advice from her mother.

“I just believe everything happens for a reason,” Jaime said. “I told her ‘You have to deal with what life throws at you. If there is a reason for you to have the biggest comeback out there, it will be. If it’s about you learning to help others who are going through this, it will happen. You just have to keep pushing. Something will happen.’”

Things were headed in the right direction last year when Alba was able to return to club activities less than 10 months after surgery, but that’s when COVID-19 shut down everything.

“I just felt like the world was working against me at that time,” Alba said. “Like my mom said, I try to have the mindset that if you keep working things work out.”

That plan came together when Alba received a scholarship from Abilene Christian University where she wants to study Kinesiology to help other people recover from injuries. If she didn’t have her recruitment put on hold she might have looked past a smaller school in Texas.

“It’s been rough and a huge mental drain on her,” Jaime said. “That kept getting harder as the dead period was extended. As a parent I was thinking, ‘Am I lying to my child?’ You have to keep faith and hope something will work out. And it did. We’re lucky and blessed that it worked out. It all led her to the right spot and where she needed to be.”

Other than her Millikan team, Alba said she has to give credit and thanks to her doctor Derek Dee for treating her like an athlete and not just another patient, and her physical therapist Chris Scott for pushing her further than she thought she could. She also got great weight training from local coach Zach Alofaituli and a huge confidence boost from her club coach Ada Greenwood.

“I wouldn’t be here without them,” Alba said. “I’m thankful that all of this happened and I’m so glad I get my senior season. It wouldn’t be the true high school experience without it.”

Just like the Abilene Christian men’s basketball team, Alba hopes she can continue to write her Cinderella story from the comfort of her own goal.

We’ve got some great shots of the Bruins’ big win over the Rams taken by photographer Stephen Dachman.