Rule changes, the transfer portal and social media have helped NCAA basketball players become the authors of their own stories, and Isaiah Washington is one of the most prolific in the nation.

Washington garnered attention with his natural feel for the game and flair for the dramatic while growing up in Harlem. The 6’1” point guard quickly became one of the most exciting players at the New York parks where he and some talented friends created Jelly Fam — a New York basketball players fraternity.

Millions of people follow Jelly Fam online and the group’s popularity is why some Beach basketball fans knew his name before Washington arrived at LBSU to play for his third school in as many years.

“It’s kind of overwhelming,” Washington said of being internet famous with over half a million followers on Instagram. “We’ve got this light on us and we can’t really be just normal.”

Washington has been playing like his normal self for LBSU while averaging 17.1 points and four assists per game. He immediately turned heads last month in the home opener against Seattle with 24 points, eight rebounds and seven assists. Watch VIDEO Highlight

“With our last scholarship we felt we needed an X factor,” LBSU coach Dan Monson said of getting Washington as a transfer in May. “We needed to move the needle.”

Washington burst onto the national scene in 2017 as a consensus top 100 recruit out of St. Raymond’s High School. His big personality and big stat lines filled the Catholic High School Athletic Association gyms like never before, and he was named Mr. Basketball for the state of New York while averaging 26 points and six assists his senior year.

Meanwhile, Washington and his closest friends were putting on shows at New York parks while creating the JellyFam legend. The name comes from his signature layup move that he created after seeing film of Michael Jordan winning the 1988 NBA All-Star dunk contest. Washington couldn’t dunk, but wanted to do a move on his layups that also included the open legs that Jordan made famous.

“Jelly is a finger roll but you have to add your own little spice to it,” Washington said on a Bleacher Report video interview that has 2 million views on YouTube.

The best Jelly Fam layups are when the ball handler has a chance to make eye contact with their opponent while finishing with style. Washington has already pulled it off multiple times in LBSU games.

Washington and his friends trademarked Jelly Fam and have been growing their unique brand and crew of young basketball players for the last five years.

“We do the Jelly stuff to give the young kids a chance so they can use their imagination to be whatever they want to be,” Washington said. “It doesn’t even have to be sports. It can be fashion, or a doctor or a lawyer. It’s about putting your mind to something and giving it your all.”

The Jelly Fam highlight videos have racked up millions of views online, and the most popular ones are when Jelly Fam members play against each other. It doesn’t matter if it’s high school, AAU or an open run in the park — the Jelly Fam takes basketball seriously.

“That makes it real competitive,” Washington said of playing his friends. “We’d go at each other like we don’t even know each other. You’d think we hate each other. Then after the game you’ll see us all buddy buddy and hugging. It’s really cool.”

His online celebrity and natural talents earned Washington college scholarship offers from around the country. He chose to attend Minnesota and play for Richard Pitino, the son of famous college coach Rick Pitino, and was in every Gophers game as a freshman. His sophomore year was highlighted by a 14-point, 13-assist performance against North Florida, but his playing time dwindled.

Time on the bench, and an ailing grandmother back in New York, factored into Washington transferring to Iona for his junior year. He excelled under coach Tim Cluess while averaging 11.4 points, four assists and five rebounds per game.

However, Cluess stepped down due to his own health concerns this year and Rick Pitino took over the program. That spelled disaster for Washington because Pitino made a disparaging comment about Washington when he was in Minnesota.

Washington entered the transfer portal in May, which allowed LBSU and Monson to step in during the quarantine.

“It’s not a free agency market yet, but It’s going to be, and it’s really close right now,” Monson said of the transfer portal. “So you have to change with it. You have to get some of those free agents. If you’re gonna stay in business, you can’t stay old-school. You’ve got to adapt with how it is.”

Monson said he had to use new methods to connect with recruits because there hasn’t been any official campus visits this year. One of those methods was trusting people who know Washington.

Former LBSU transfer Edis Deversevic is Washington’s longtime friend from New York, and although Deversevic was actually suspended multiple times by Monson during his short stay at LBSU, Monson said Deversevic talked up the program to support the move.

“It’s funny how the ones you butt heads with the most appreciate it the most,” Monson said. “He couldn’t have been more positive about his experience with me and he said to me, ‘Coach that’s really how I feel. I really feel like it changed my life and the place can change his life” sort of thing.”

Washington took the guidance in stride while prioritizing his life.

“I look at life totally different now,” Washington said. “Something can be taken away from you no matter what. Like with COVID, we didn’t know if we would ever play basketball again. Luckily it came back because I really don’t want to do anything else but basketball.”

Over the summer, Washington did everything he could to stay in basketball shape while keeping his eyes on the prize of playing his senior year.

“Whoever said they need a gym to be better is just using an excuse,” Washington said. “When I grew up I didn’t have a gym. I was always in the park so I had to get it how I live… I don’t think about (the last two years) too much. I really try to stay out of my head. I’m gong to counseling and stuff like that to just stay level-headed. It’s been a tough journey but I don’t pay in any mind and try to move forward and I love it (at LBSU). I’m so glad everyone accepted me with open arms.” 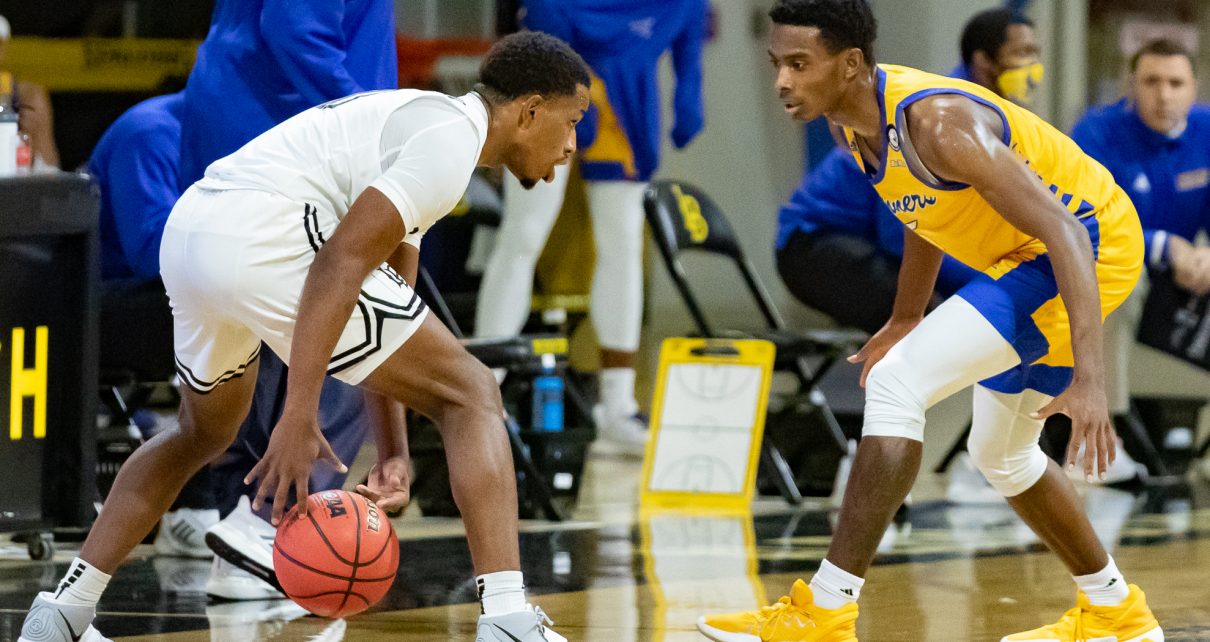 Washington and his teammates bonded while being sequestered this summer because they only had each other.

“Most of us grew up in similar situations,” he said. “We grew up in poverty with a lot of single parents. We can relate to each other.”

The close connection was palpable down the stretch against Seattle when Washington got called for a late foul, and the free throws tied the game.

“I felt like I let my teammates down,” Washington said. “I looked at coach and he was like, ‘Come on!’ So I knew I was going to make that shot because I practice it too much.”

Washington took the ball down the floor and drilled a 3-pointer to give LBSU the lead for good. He said after the game that he didn’t care there weren’t any fans in attendance because of COVID-19 protocols.

“It didn’t feel weird at all,” Washington said. “I got a group of guys who are working hard and who love me and want to see me do well and I want the same for them. When we’re on the floor we just focus on us and the game. Our energy is really important. The more we feed off of each other the more it will help us win games.”

This week on the show we’re discussing the problems with All-League lists, updating you on the Long Beach athletes in the pros and giving each other an Offseason Reset interview. 01:45 What’s Wrong With These All-League Lists? 13:00 LB In The MLB, NBA & NFL 22:00 Offseason Reset For Mike & JJ

An announcement concerning the contract of 11-year head coach Dan Monson, and the future of the Long Beach State men’s basketball program is expected to come Thursday, according to the university sports information department. Monson’s unique five-year contract with the university expires after next season, but LBSU Andy Fee said he and Monson met last […]

PODCAST: How Is Long Beach State Restarting Athletics On Campus?

This week on the LB Fee Show we’re talking to Sr. Associate Athletics Director Mark Edrington about how LBSU is adhering to COVID-19 protocols as they bring sports back. He also tells us some great stories about the Walter Pyramid. S4E69 – True Tales Of The Walter Pyramid!! And A Return To Spring Sports With […]