It’s a “so far, so good” situation for the Long Beach State men’s and women’s basketball programs after the lengthy COVID-19 quarantine and their return to outdoor activities this month.

“Luckily our basketball men and women are feeling good, testing negative, taking baby steps and hopefully headed inside soon,” LBSU Athletic Director Andy Fee said. “I just don’t know when that will be.”

One thing LBSU does know is when the Big West games are supposed to be played. The conference has released a unique schedule for the upcoming season that features all 11 member schools playing in a back-to-back format.

Instead of traveling for two games a week, or hosting two different teams in a week, the Big West schools will travel to and host the same school for consecutive games. The LBSU men will open conference action at UC Riverside on Dec. 27 and 28 while the women’s team will host the Highlanders at Walter Pyramid. The men’s home opener is New Year’s Day against CSU Bakersfield.

Big West officials say this strategy will cut down on travel and hopefully the possibility of transmitting COVID-19. Most of the games will be on Friday and Saturday, and the conference says that no games will be rescheduled if any team needs to quarantine during the season. There also will be no spectators allowed when the season starts, but the conference said it will revisit that as the season progresses.

“The Big West Conference understands the need for consistent and multi-layered levels of testing protocols that put safety at the forefront for our member institutions,“ said Big West Commissioner Dan Butterly in an official statement. “Cognizant of state and county restrictions, and the NCAA Core Principles of Resocialization of Collegiate Basketball, we feel we have a plan in place that will adhere to those mandates.”

The 2021 Big West Basketball Tournament is still scheduled to start March 10 at Honda Center in Anaheim, with the regular eight men’s and eight women’s teams competing. Since the NCAA has officially announced Nov. 25 as the start date for the 2020-21 basketball season.

LBSU is close to releasing its full non-conference schedules. The likely opponents for the men will be UCLA, University of San Fransisco, LMU, Cal Baptist, Seattle University and the University of San Diego. Seattle will be the only home game. Dates and times are to be determined once the lawyers finalize the contracts.

LBSU women’s basketball will take on William Jessup, SDSU, Seattle University, Santa Clara and USC. The games again USC and SDSU will be the only away games.

Meanwhile, both LBSU teams are back to some form of socially distant practice on campus this month. They spent a few days working out and rebuilding endurance before starting individual drills on outdoor buckets at Rhodes Tennis Center. 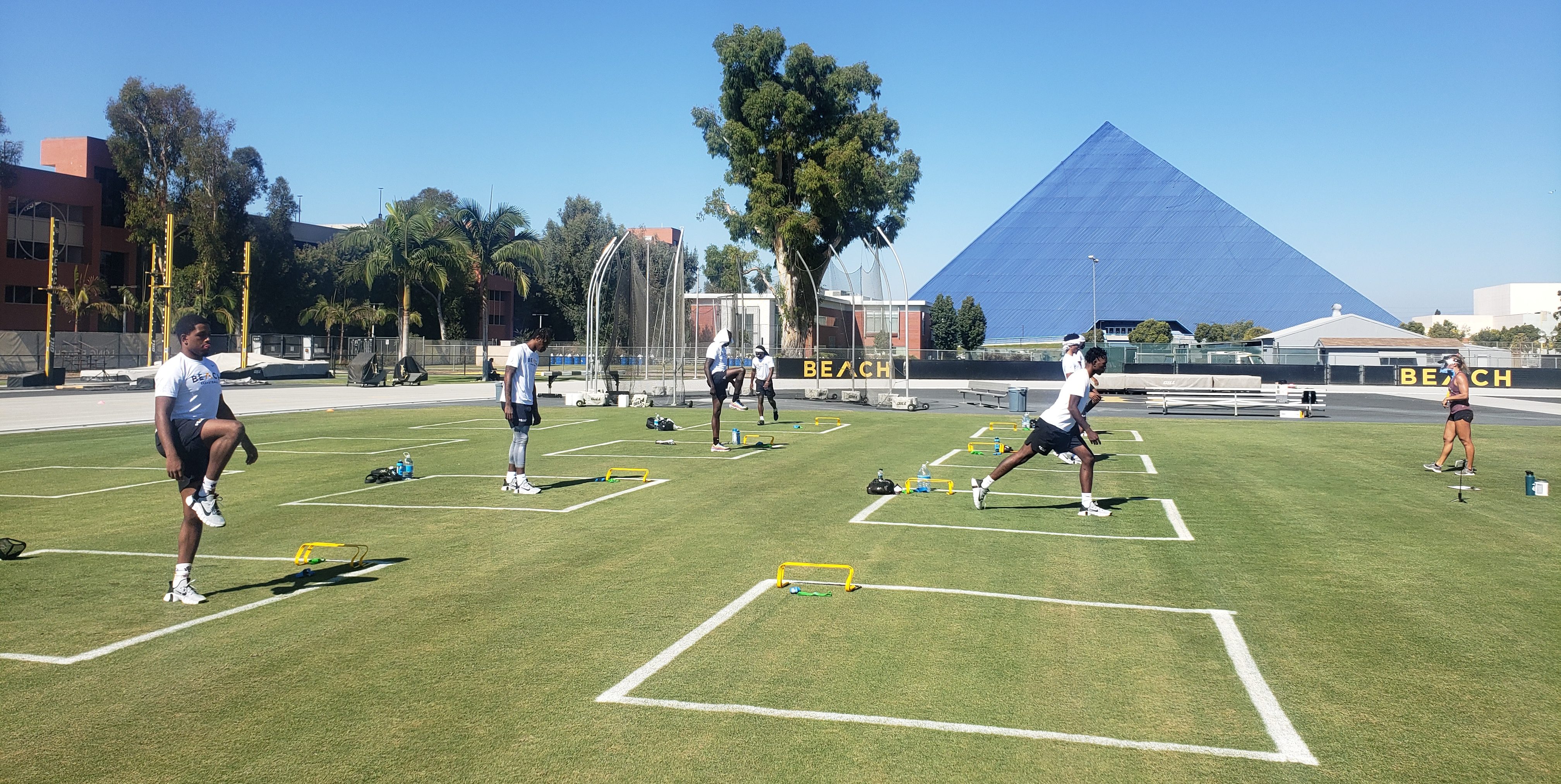 LBSU’s Director of Sports Performance, Laura Teel, and her staff of strength and conditioning coaches have been in charge of almost everything that happens during these outdoor practices. She said working slowly and within new limitations has been key to getting the student-athletes back in playing shape.

“We’re doing a lot to make sure the right muscles are working and working at the right time,” Teel said. “The players were super excited to work, touch a basketball and do all of the training they haven’t been able to do. Comradery and community really helps us work and work hard.”

Controlling movement through plyometric power work and landing mechanics has been key to keeping the student-athletes healthy, according to Teel, because most soft tissue injuries occur in the first two weeks of training.

“We follow pretty strict protocols that come from the NCAA, as well as the governing board for strength and conditioning professionals, on how to progress athletes,” Teel said. “We’re preparing for the season, but we’re also programming for the function of the human body. We have lots of room to grow there, even with the limited options we have.”

A Long Beach water polo legend passed away last week as Bob Horn passed away at 87 after a long illness. Horn was known most for his legendary career as a men’s swimming and water polo coach at UCLA, but he was a two-time All-American player at Long Beach State in 1957 and 58. Horn […]

The Long Beach State Dirtbags offense exploded for a season-high 14 hits in their 14-3 win over No. 23 TCU on Friday night on Bohl Diamond at Blair Field. LBSU (2-11) can win its first weekend series of the season at 1 p.m. on Sunday. All nine Dirtbags starters collected a hit as they put […]