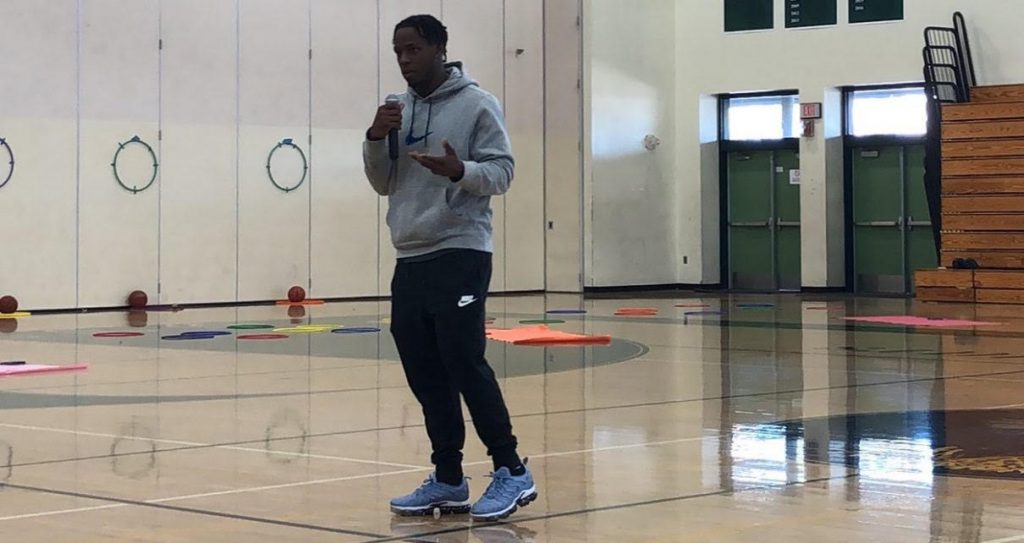 One of the final highlights of the abbreviated athletic year came on the Westside as Cabrillo hosted the second annual Moore League Sportsmanship Symposium. The event welcomed 10th and 11th graders from all seven of the league’s schools in an effort to highlight the off-field values brought out by athletic competition. The event featured marquee speakers in Cincinnati Bengals wide receiver and Jordan High alum, John Ross III, plus CIF-SS Commissioner and Wilson High alum, Rob Wigod.

Ross offered the student-athletes some perspective on what he went through on his road to the NFL and stressed the importance of academics.

“You have more resources around you than you realize, but it’s on you to take advantage,” Ross said. “Don’t wait until you’re a senior, do it now.” 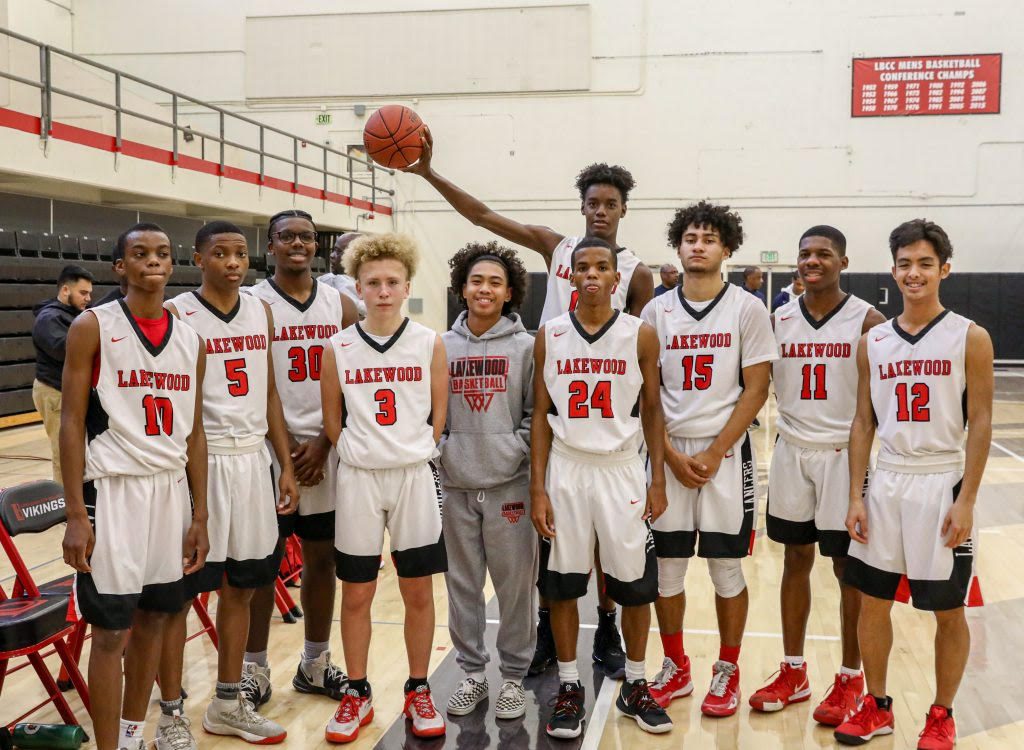 Though the Lancers were just a game over .500 this season, they did score one of the most notable upsets of the 2019-20 sports season with their 66-61 victory over Long Beach Poly. Lakewood had lost by nearly 20 points against the Jackrabbits just a few weeks prior, but responded for an impressive win on its home floor.

The victory was reminiscent of Lakewood’s upset of the Jackrabbits during the 2018 season, when the Lancers went to Poly and handed the Jackrabbits their only league loss of the year in a 90-87 overtime thriller. This time, the Lancers’ upset opened the door for the Millikan Rams to grab a share of the 2019-20 Moore League title despite losing both head-to-head meetings with Poly.

Providing even more context on Lakewood’s win, it was the first time the Lancers have beaten Poly at Tim Sweeney Gymnasium since a 63-49 win back in the 2005 season. 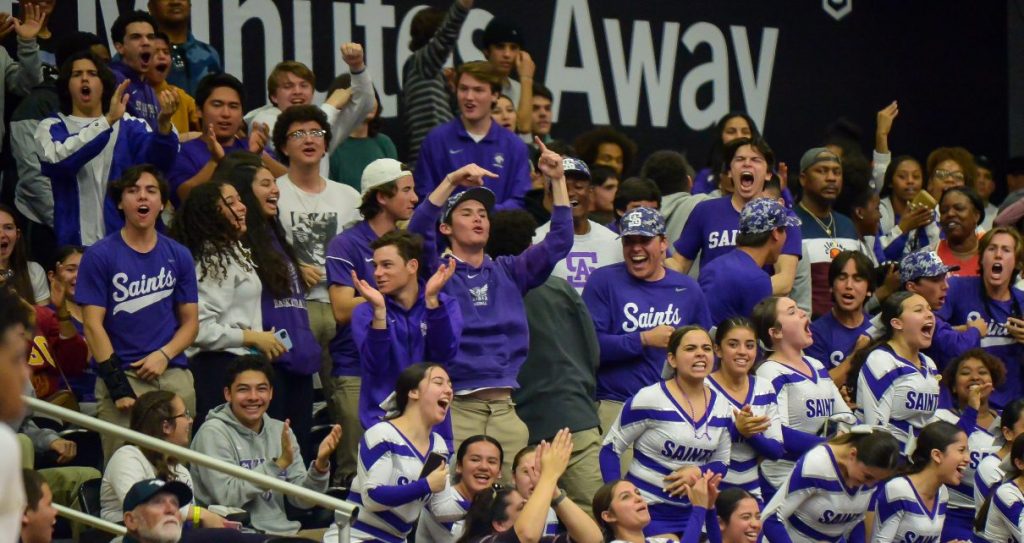 It’s been a slow build for Allen Caveness’ St. Anthony boys’ basketball program, which has stepped up year by year underneath him. This year was a new plateau for sure, with the Saints beating Bishop Montgomery to claim a league championship, and then earned a spot in the CIF Southern Section Open Division playoffs as one of the eight top teams in Southern California. The Saints also beat Poly in impressive fashion in the St. John Bosco Winter Invitational, proving that they’re not only on the map in the city of Long Beach, they’re on top right now. 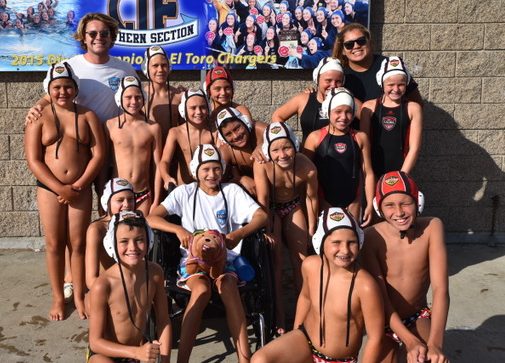 The Long Beach Shore Aquatics water polo program started the athletic year with a handful of strong finishes at the Junior Olympics in August. The 10U coed water polo team led the way by going undefeated to win Shore’s second consecutive national championship at the coed level. After entering the tournament ranked 26th nationally, Shore dominated the competition. Goaltender Morgan Crichton was the tournament MVP after he held nationally ranked Vanguard to one goal in the championship game. 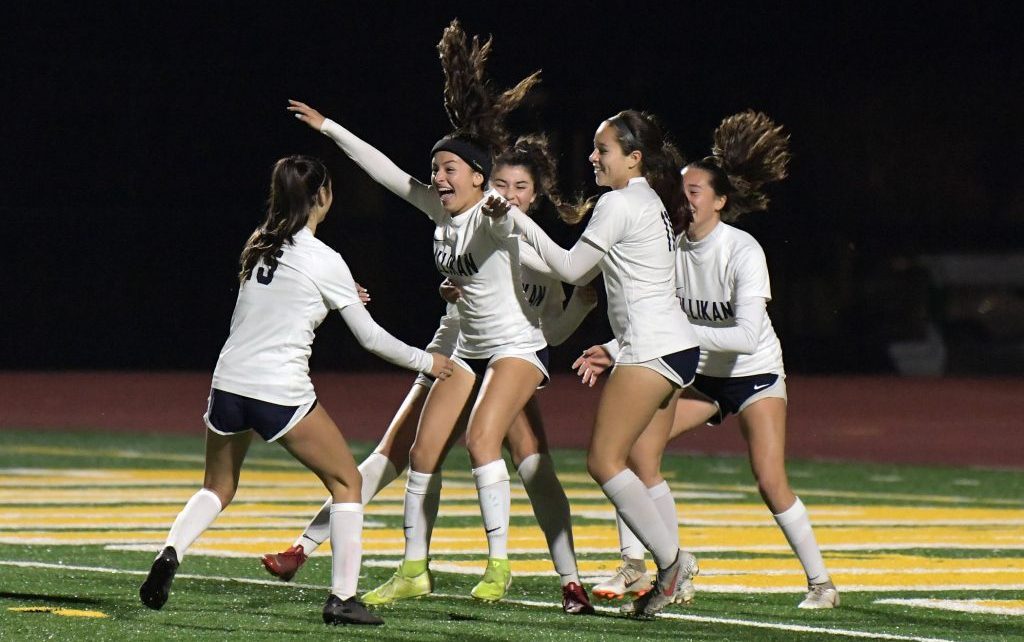 “This is special for the program,” Nunez said. “Not only the girls from last year and this year. It’s for the girls that have been part of the program that understand the work we’ve put in. They’re the ones that’ve laid the foundation.” 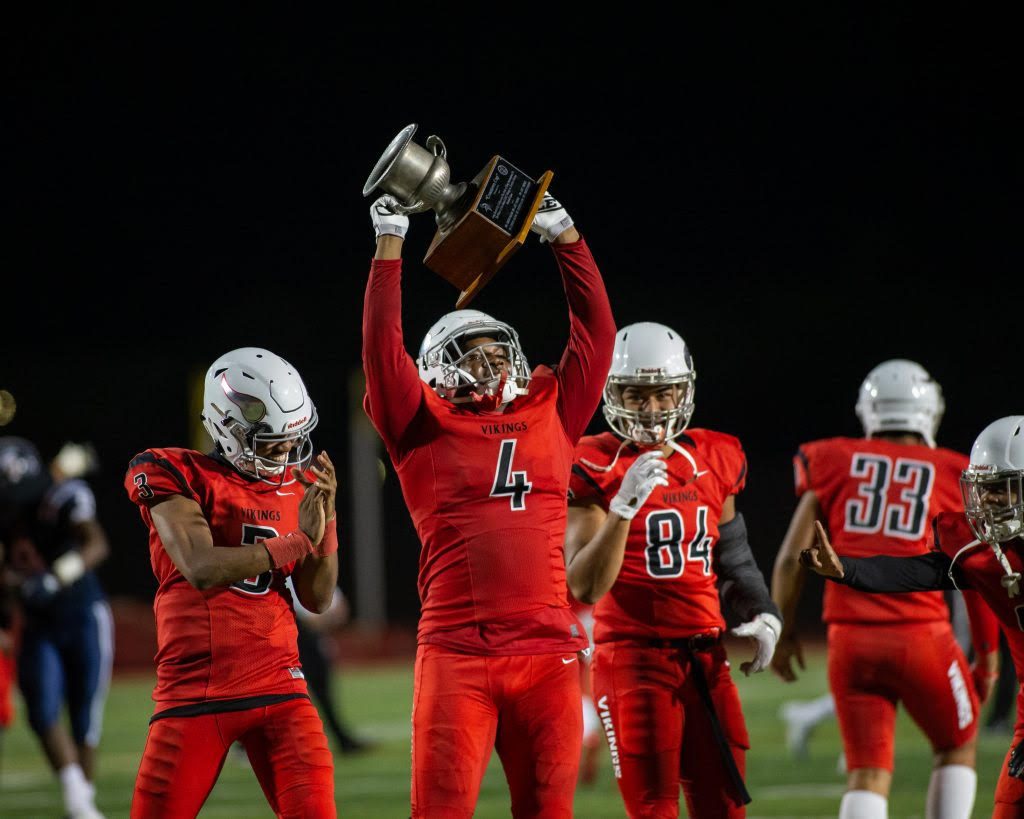 Coming off a disappointing 2018 campaign that saw the Vikings go 4-6 overall, with a 1-4 record in conference action, LBCC was out for redemption in 2019. The Vikings turned things around under seventh-year head coach Brett Peabody, winning a fourth conference title in the last five seasons. LBCC went 7-3 overall against a difficult schedule, and posted a 4-1 conference record that earned the Vikings a three-way share of the National Northern League title.

The Vikings were selected for the Southern California Bowl Game where they earned a 20-16 victory over Southwestern College. Earlier in the season, LBCC nearly knocked off the No. 1-ranked junior college team in the country, coming up just short in a 31-28 loss at Riverside.

Accolades rolled in after the season as both Shane Irwin and D’Anthony Jones were named CCCFCA First Team All-Americans for the Vikings. Dallas Branch and Zion Bowens were named First Team All-State. This team will be represented at the next level in years to come, with seven players signing Division I scholarships after the season. Irwin and Divine Obichere are both headed to Boise State, Bowens signed with Hawai’i, Jones is headed to Houston, Branch signed with San Diego State, Teeshaun Turpin signed with North Texas, and Malik Welch will be playing at San Jose State next season.

The success of the 2019 season made the disappointment of 2018 appear to be nothing more than a blip on the radar, and Vikings football fans have reason to be optimistic about the program’s future under Peabody. 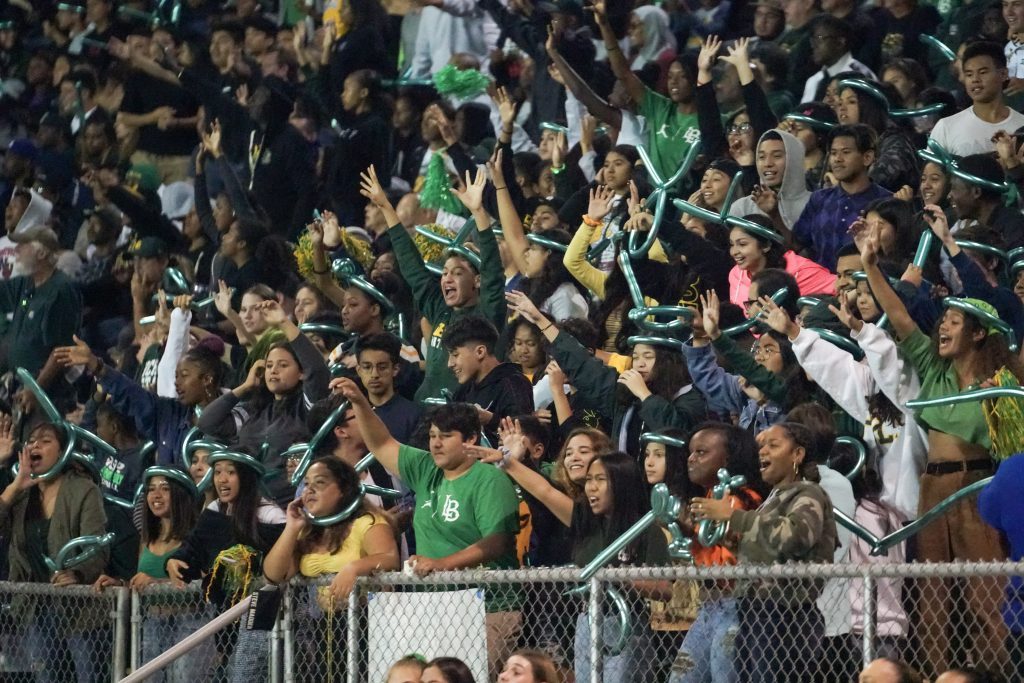 By far our favorite single night of the 2019-20 sports season was the huge showdown between Long Beach Poly and Wilson, in what ended up deciding the Moore League championship. Admittedly, the game wasn’t as good as the hype–Poly won 42-24 after taking a 42-17 lead midway through the third quarter. But the sold-out crowd, the smack talk on social media before the game, the thousands of proud alums wearing their school’s colors–that’s the very best of high school sports. It was fun to see some heat return to the Big Game, and we hope these teams continue to circle each other on the calendar for years to come: the city needs it. 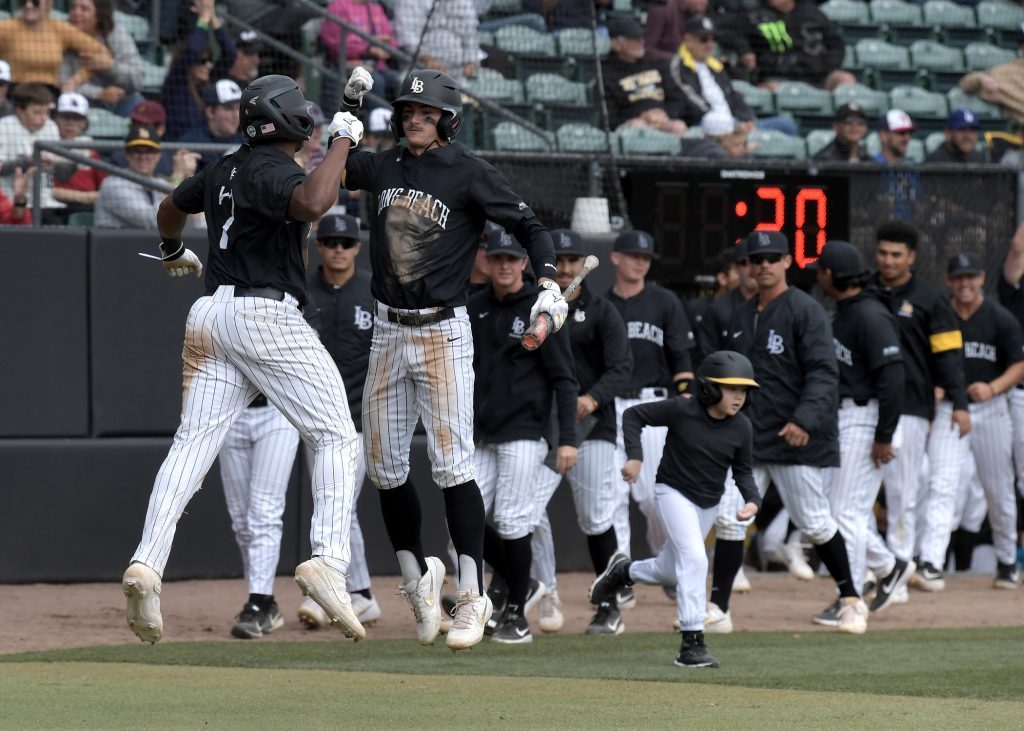 When No. 6 Mississippi State came to Long Beach at the end of February for a three-game series against the No. 25 Dirtbags at Bohl Diamond at Blair Field coach Eric Valenzuela called it, “One of, if not the biggest series of the weekend in the country this weekend.”

He was right, and the Dirtbags looked elite by taking the series off the highly touted Bulldogs. LBSU and freshman starting pitcher Luis Ramirez dominated the rubber match on Sunday in a 6-2 victory. Ramirez, who was named a Freshman All-American, gave up two runs in the first inning against MSU but battled his way though seven innings. He scattered seven hits and three walks while striking out four.

The win moved the Dirtbags as high as No. 12 in national rankings, which is the best for LBSU since Jered Weaver was on the mound. 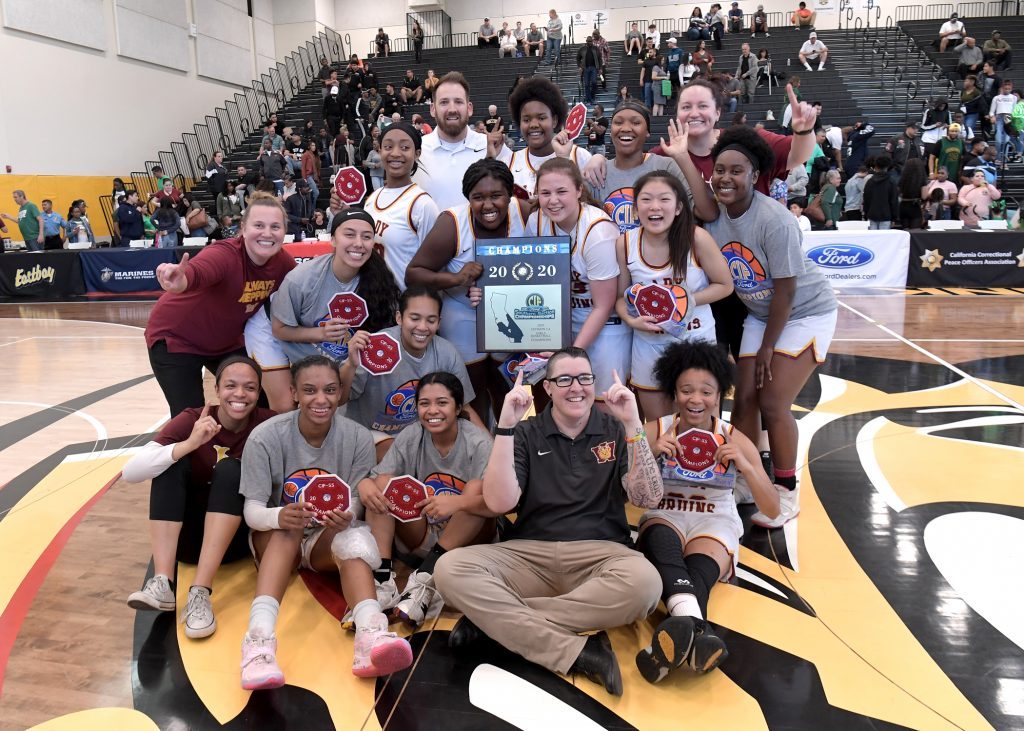 The Wilson girls’ basketball program set out to make history in the CIF-SS Division 3A playoffs and did exactly that with a dramatic 66-62 win over Eisenhower in the final. It’s the first CIF title for the program since 2000.

The Bruins played an aggressive style brimming with confidence and were led by a pair of playmaking guards in Samiya Terry and Ashley Hawkins. Hawkins averaged a team-high 19 points per game during the 25-win season. Terry scored a game-high 24 points in the win over Eisenhower at Godinez Fundamental High School.

“I’m not leaving here without my CIF Southern Section Division 3A ring,” Terry said about giving her team a much-needed lift in overtime. “That was what was going through my head, I’m getting that ring and we got off to a slow start and I knew my team needed me, especially with my block at the end. We needed that.” 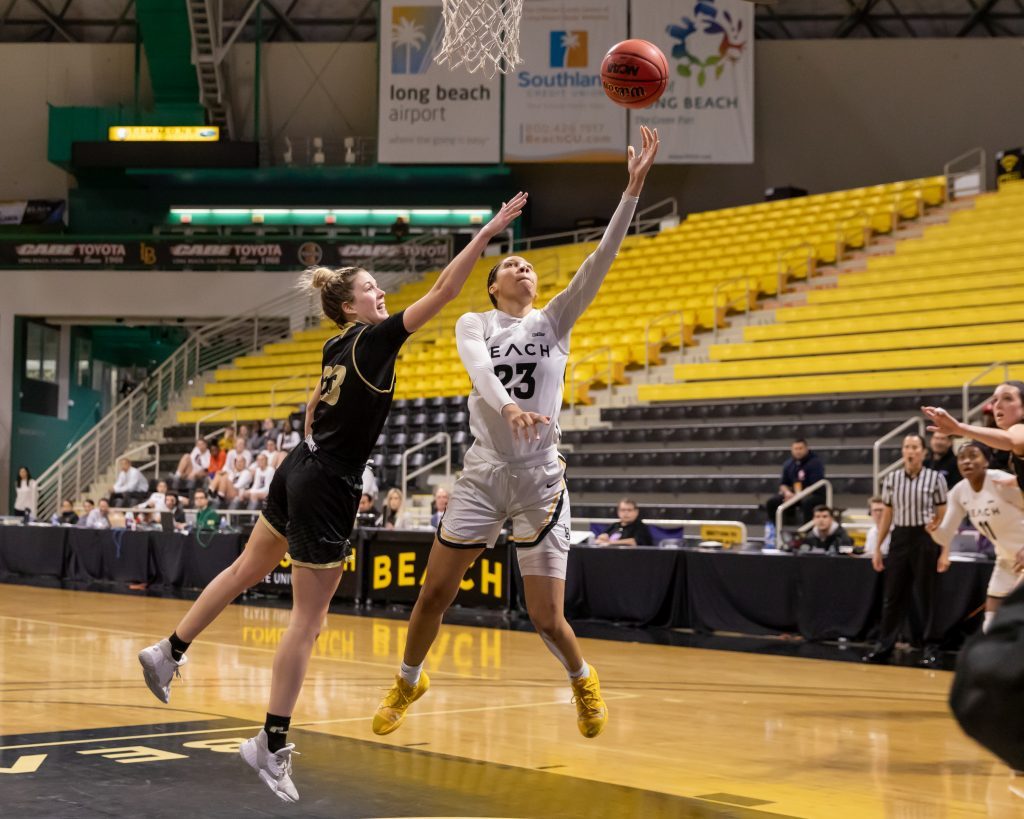 The Grand Prix of Long Beach. The Moore League baseball and Dirtbags baseball seasons at Bohl Diamond at Blair Field. The Moore League track championships. The list of canceled events rolls on and on, and there’s no doubt that, like it or not, the 2019-20 sports season will be more remembered for the games that didn’t happen than for the games that did.

We’ll never stop wondering how good the St. Anthony softball team, or Wilson’s Rachel Glenn, might have been this Spring. We’ll never forget how strange it was to cover a Big West Tournament women’s basketball game in the Walter Pyramid with no fans in attendance. Like the rest of the Long Beach sports community, all we can do is hope that the 2020-21 sports season will be heavier on the sports, and lighter on the cancelations.

Long Beach soccer fans have gone from famine to feast this month. March started with the hope that local high school teams could return to action, and already this week there’s a pair of first-place showdowns for Moore League boys’ and girls’ soccer. Wilson boys’ are off to a hot start and visit Millikan tonight […]

STORY AND VIDEO BY MATT SIMON In what was his final game as the Millikan boys soccer coach, Rod Petkovic and the Rams were defeated 1-0 in the CIF Division 1 second round Friday night at Veterans Memorial Stadium. With different styles of play, Millikan and Santa exchanged scoring opportunities with the Saints taking an […]

Now more than ever, small business owners have been forced to adapt. Within the last six weeks, local businesses have lived through closures, re-openings, and then re-closures due to the coronavirus pandemic. As businesses look for ways to survive during such an uncertain time, creativity is key. For local fitness studios, that’s meant taking business […]