From dancing at prom to walking the graduation stage, the Class of 2020 has missed out on a lot this spring. While isolated at home, separated from teachers and classmates, seniors have had to miss out on celebrating the culmination of their high school years. Local schools are well aware of the struggles their seniors have gone through, and have come up with some creative ways to honor the Class of 2020.

One of the recent initiatives was the distribution of yard signs congratulating this year’s senior class, given out free of charge by the schools’ ASB offices to all graduating seniors. The idea came about via collaboration from the LBUSD’s high school activities directors, who have been working together since the start of the shutdown.

“The activities directors from all the Long Beach schools have been meeting since the schools were closed on March 16,” said Vincent Puth, the Activities Director at Poly High School. “That very next week we met twice and we’ve been meeting two times a week ever since over Zoom.”

Poly and Wilson High recently held a celebratory parade on campus where seniors could drive through and pick up their yard signs. Teachers and administrators came out with masks and gloves on, welcoming their students back to campus, even if just for a few minutes.

“We wanted to create in essence a party,” said Erin Fekjar, the Activities Director at Wilson. “We had a speaker out there playing music, Woody was out there the entire time, and at any given time we had 15-20 teachers and administrators with pom-poms wearing our spirit shirts cheering the seniors as they came through.”

Long Beach’s two oldest and largest high schools combined to pass out roughly 900 signs during their on-campus events, seeing hundreds of seniors roll through campus with their families. 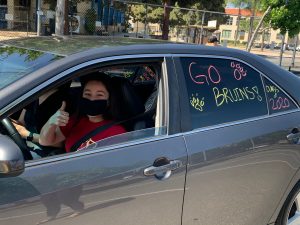 “As kids are driving by and mom’s in the back seat, dad’s in the front seat and the senior’s driving, you’re seeing the whole family,” Fekjar explained. “You saw kid after kid, senior after senior. It was a great, great experience.”

At Poly, Puth was pleasantly surprised at how much emotion was displayed by the parents of departing seniors. He remembers a mom with her son, honking the whole way down Jackrabbit Lane as teachers and staff cheered them on. Once they received their sign, the mom stopped the car to give her son a big hug before leaving campus.

“Nobody expected it to be that touching for something as small as a sign,” Puth admitted. “But for some people this is at least something to celebrate that big momentous occasion.”

Both Puth and Fekjar have received positive feedback from students who have expressed thanks for the gesture, even if there is no perfect solution.

“I would say 95 percent of the students are very appreciative,” said Puth. “So that to me warms my heart. It’s truly genuine appreciation for what we did. A good five percent were saying they preferred something else, but even with that attitude, it wasn’t rude or anything. They said thank you, but it still just doesn’t quite fulfill being able to walk and have something on stage.”

Fekjar is the mom of a Wilson senior, making this an especially difficult time for her to navigate, but she has been overwhelmed with thank you messages both via text and on social media.

“A lot of students went and took pictures of themselves or their family with the signs and posted it on social media,” Fekjar said. “There’s a lot of love and I think a lot of appreciation for what we did … When you handed a senior their sign and you’re masked up and gloved up and you see the tears in their eyes, it was definitely worth every ounce of effort to make it happen.” 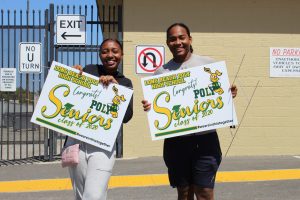 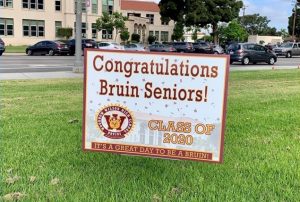 On Monday, Millikan upset Compton on the road with a last-minute bucket while Wilson and Poly both won comfortably at home. Wilson 58, Jordan 47 Points in the open floor and a huge second half from sophomore Dallas Cooper lifted the Bruins to a win at home. VIDEO HIGHLIGHT “I just try to bring as […]

Five Long Beach football players signed to NFL teams over the last weekend, including four who signed as undrafted free agents. Lakewood alum Matt Pryor went from the Lancers to TCU where he had a solid four-year career on the O-Line that saw him earn second-team All-Big 12 honors last season. Pryor was drafted in […]

The “clutch” moments in a football game aren’t always at the end. A third down near midfield that will flip field position, or an early extra point in a close contest are imperative moments for a successful football team. When Wilson needs someone to step up in a big moment, they call on Nick Timko. […]