Matt Fields knew his baseball career hung in the balance when his doctor walked back into the exam room. The Lakewood High alum had already faced three straight years of arm injuries since coming to Long Beach State, and he was slowly running out of eligibility and patience.

“Basically there’s a chance my elbow could break while I’m pitching,” Fields said of the bad news he received last October. “The doctor said, ‘You have two options. Either keep throwing, or you quit.’ So, I might as well throw until it breaks.”

A more cautious approach in the bullpen has helped Fields stay healthy and contribute to the impressive numbers LBSU coach Eric Valenzuela’s pitching staff has compiled so far this season.

The Dirtbags (8-4) are back at Bohl Diamond at Blair Field this weekend hosting Xavier, and Fields said he’s ready to come out of the bullpen for the third straight week. The 6’0” 170-pound righty has pitched five perfect innings with six strikeouts in four appearances.

“He feels good right now and I’m not going to say we’re babying him, but we’re taking care of him,” Valenzuela said. “He has a future. Whether it’s professional baseball or throwing batting practice to his sons when he’s older. You just want to make sure that he’s taken care of. We’re just being careful and cautious with it. He may feel like he can throw a complete game, we’re just not in the business of doing that to these kids.”

Fields said Valenzuela’s leniency in practice has allowed him to listen to his arm.

Fields’ goal is to always be prepared to pitch on Friday. If he does, he won’t throw on Saturday. Depending on how he feels, he’d try to be back for Sunday.

“When it hurts it’s like muscle based acheness,” Fields said. “It’s like I have really bad dead arm.”

It’s fair to assume that years of pitching for Lakewood Village, Heartwell PONY and Lakewood High have taken their toll. Fields also played shortstop and third base when he wasn’t on the mound.

“I’ve always loved baseball, mostly because I was able to compete with my older brother,” Fields said of Eric, who was a senior on the Lakewood baseball team when Matt made Varsity as a sophomore.

“My dad would take us to the field and we would hit,” Fields said. “(Eric) is older and bigger than me so I was just trying my best to be better than him.”

Fields said he decide to attend Long Beach State because of familiarity. His father also attended the university.

“I grew up watching the Dirtbags,” Fields said. “I was able to go to games with my dad and my brother. I just loved watching them play. They also have a very good reputation for pitching.” 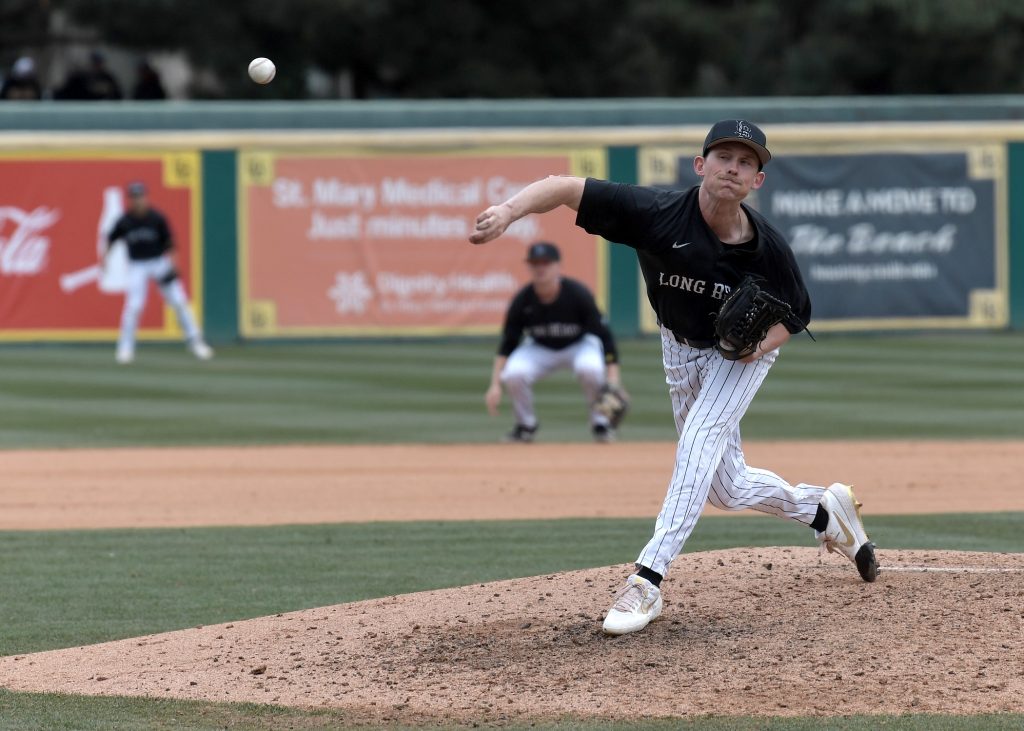 The diminutive Fields quickly impressed the Dirtbags coaches and made five appearances and two starts as a true freshman before an impingement in his shoulder ended his season.

Fields said, “When I got the MRI on my shoulder the guy was like, ‘You have the shoulder of a 40-year old man who pitched in the Bigs for 10 years’.”

While making his slow return for his second year at LBSU, Fields said he felt something wrong with his elbow. A few weeks later he had Tommy John surgery to repair his ligaments.

Last season, Fields looked great in his return to the mound. However, his elbow started hurting even more and that’s when the doctor diagnosed him with “overuse” and shut him down for the rest of his season.

While preparing for his redshirt junior season in October, Fields again felt something weird with his bicep, tricep and back of his elbow. So, he went back to doctor and the imaging showed he had a stress fracture in his elbow. That’s when Fields decided to throw until he can’t throw anymore.

“We make great relationships here,” Fields said. “We’re all brothers. Being in my situation and being hurt for three years and watching people go through the program, graduate, get drafted, get jobs… Now it’s my turn to help. I want to play with these guys and celebrate with these guys. I want to hurt when they’re hurting. I want to contribute and do my part for this program.”

Fields said he’s not thinking about how any trip to the mound could be his last.

“I just go out there and have fun,” Fields said. “The atmosphere is unreal with these coaches. If you’re going out there worried you’re going at it completely the wrong way. Coach V always says, ‘There’s never any panic. Everything is going to work itself out’.”

Fields already had that attitude while he was recovering from Tommy John surgery.

“I think my sophomore year after surgery, just sitting in the dugout listening to the coaches, charting the pitches… that’s when I learned the most about baseball,” Fields said. “I never really had a high IQ for pitching. I kind of just went up there and threw whatever the coach called. Now I’m understanding that pitching is a puzzle that you have to put together, not just getting up there to throw.”

“He’s always been a really good pitcher,” Valenzuela said. “His fastball location is good. He has a good changeup and he has an outstanding slider. If you mix that with some experience in an older guy, that’s very helpful… I think those two innings he pitched (against No. 6 Mississippi State last week) were pretty much the two easiest innings of the weekend”

Valenzuela is hoping Fields and the rest of the Dirtbags pitching staff can continue to dominate this weekend against Xavier. LBSU has a 2.43 team ERA with 106 strikeouts in 111 innings. Opponents are hitting .200 against the Dirtbags.

Xavier (4-7) is having an odd season. The Musketeers beat winless Northern Kentucky 24-15 this week after struggling against quality competition including No. 3 Louisville, No. 15 Ole Miss and the College of Charleston.

“They’re extremely battle tested,” Valenzuela said of Xavier. “It’s not like we’re going to throw guys at them that they haven’t seen. It’s just a matter of us doing our part. If we play the way we’ve been playing the last three weekends, then it should be a good weekend for us.”

The Eric Valenzuela era starts this weekend at Bohl Diamond at Blair Field when the Long Beach State Dirtbags host Cal in a season-opening series. LBSU’s historic baseball program has been significantly slowing down since hosting the 2017 NCAA Super Regional. Last season was doomed by a record-worst start and midseason firing of coach Troy […]