Intimidation and momentum are competitive intangibles, and Long Beach Poly girls’ soccer has both in its corner headed into the CIF Southern Section playoffs this week — thanks to Aniah Cutler.

Cutler scored a hat trick at Wilson late last month, including a last-minute game winner, to knock the Bruins out of first place in the Moore League. The senior forward also scored the only two Jackrabbit goals in the loss to rival Wilson last month, and the senior knows that success is a byproduct of confidence and swagger.

“I know that I have this intimidation factor,” Cutler says. “If I didn’t act as confident, I don’t think I would be as successful.”

The Jackrabbits (9-2-1) hope that Cutler’s leadership leads to postseason success when Poly starts the Division 1 playoffs today at Temecula Valley.

“In a match, if I see someone is scared of me, I’m going to go to their side no matter where they are and I’m just going to keep taking them on,” Cutler says. “That comes from my club coach.”

Cutler is the youngest of four athletic children who fed off each other’s competitiveness, and she always considered herself a soccer player.

“I’ve liked soccer from the first time I played,” Cutler says. “I love how exciting it is because you’re always on your toes no matter what’s happening.”

After changing soccer clubs from Slammers to Strikers as a freshman, Cutler said her game was changed by coach Terri Patraw.

“She instilled the confidence in me and let me know I would be something one day,” Cutler says. “I would take more shots, take people on with skills I didn’t normally try.”

Before practice, Cutler would also work hard on tedious cone drills to improve her touch on the ball. She found it easy to thrive in the Moore League last season because of her size and pace.

“It’s easy for someone like me to adapt because I’m already physical,” Cutler says.

The 5’9” forward plays the game with an athletic reckless abandon that gets her in and out of key situations quickly. Cutler also picks up scoring opportunities with her pure speed and presence. She’s scored more than 30 goals for Poly this season.

“After Aniah goes in for one tackle you can see the other team start pulling up when they go in for tackles against her,” Poly senior Morgan King says. “They know she’s not going to stop.” 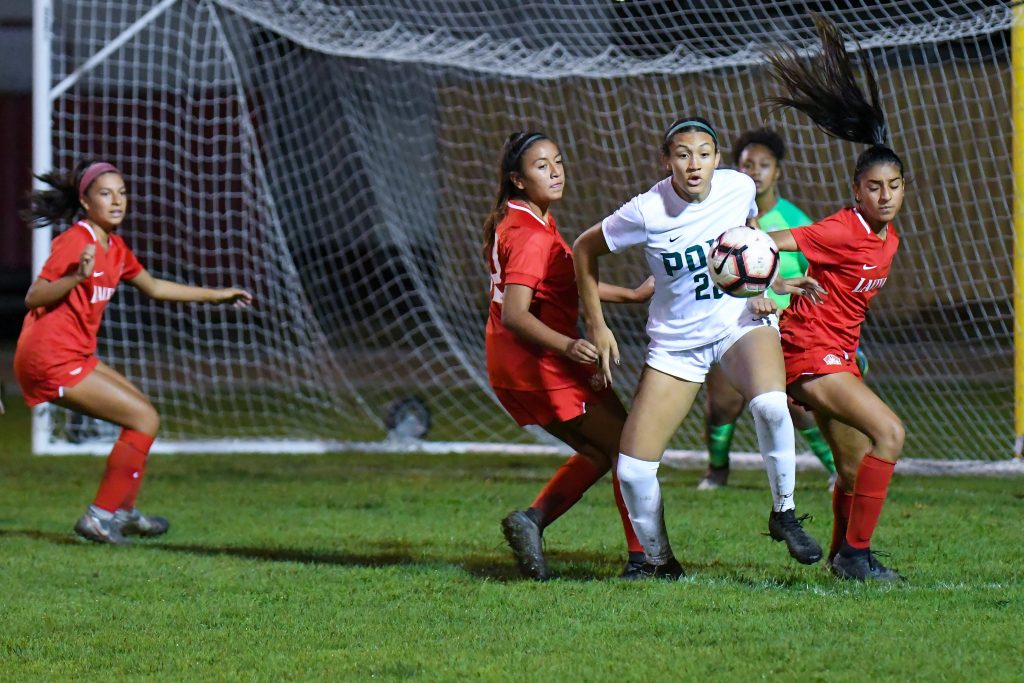 Cutler’s parents Kevin Cutler and Melissa Pitts say that fearlessness comes from being challenged by her older siblings. Last year, her sister Alannah Cutler was Poly’s senior leader on defense.

“It was always an even battle at home,” Pitts says of her daughters. “Aniah wasn’t going to be the loser, no matter what it was. Alannah is a tough act to beat.”

“Aniah goes hard,” Kevin says. “She’s by far the best athlete in our family. No question. If she sets her mind to it, she can do it, and she will do it. She doesn’t give up or lay down.”

It didn’t take new Poly coach Anthony Perez long to figure out where Cutler gets her swagger.

“It’s pedigree,” Perez says. “She was raised properly. She’s got the right blend of confidence and humility. That is what brings swag.”

Cutler thinks that swagger is easy to have and maintain at a place like Poly.

“The support from everyone at the school makes us play so much better,” Cutler says. “Everyone is competitive at our school. People who don’t even play soccer will say, ‘I heard you guys lost. You better beat them next time.’ It’s good to have people who are so motivating all the time.”

King and the Jackrabbits have happily followed Cutler’s leadership style because it’s the type of people they are.

“People from Long Beach are just different,” King says. “We’re mentally stronger and physically stronger than our opponents. And I think they can tell that. Not only from our appearance, but from the way we carry ourselves. Nobody can match it.”

Cutler remembers a club teammate of hers said that a playoff opponent last year was “terrified” when Poly got off the bus.

“It’s the way we carry ourselves,” Cutler says. “We just aren’t afraid of anything. Even if we know a team is better than us, we wouldn’t come out scared. None of us are intimidated.”

“She’s always been like that,” Pitts says of Aniah. “She was the one who loved everybody, and ran them over on the field. When she was 4 and the coach said ‘Go!’ she ran through every body. She didn’t have a clue what she was doing but you could tell that she just wanted to please the coach.”

Cutler signed her National Letter of Intent last week to continue her academic and athletic career at Washington State, and King signed with Northern Colorado.

Perez says that King and Cutler are inseparable on and off the field because they’re both in love with soccer, and they’re both youngest siblings with something to prove.

“We’re always talking about soccer and different strategies,” King said. “It definitely brought us closer. It’s just something we can easily connect with. And through that connection, our friendship has grown so much.”

“I was playing to isolate Morgan behind the front line earlier in the season,” Perez said. “Because (Cutler and King) always seem to find each other no matter what.”

Millikan girls’ golf solidified its hold on second place in the Moore League by defeated Long Beach Poly 223-247 on Tuesday at El Dorado Park Golf Course. Poly’s Hannah Van Wagner took the medalist honor with a round of 43. Millikan was led by Hibson Millikan (44), Taylor Espinosa (44) and Juliette Ruaux (45).

It was the wild end to the Moore League volleyball season that many expected, but after the dust settled it was the Lakewood Lancers, a varsity team with only two bench players, that were crowned league champions. It’s the second consecutive title for the Lancers and third in the last five years. There was a […]

We’ve got some great photos from the Jackrabbits’ win over the Bruins from photographer Joseph Kling.