The 6’4” 190-pound wide receiver (#6) already has seven touchdown catches for the Saints in his first seven games of organized tackle football, and his time with the program has helped Jenkins improve the positive aspects of his personality.

“Football has been really good and empowering for him,” Riley’s dad Jeff Jenkins said. “He’s matured quite a bit, transitioning from being a teenager to recognizing that it’s time to start making decisions. He’s pretty thoughtful about the way he approaches things. A little maturity has turned into a little young man’s wisdom.”

Jenkins and the St. Anthony Saints (3-4, 1-0) will be back at Clark Field on Friday night for Homecoming against visiting La Salle.

“I didn’t expect this to happen in any way,” Jenkins said of his quick success. “Having never played tackle football, coming in for senior year and trying to make a difference… I’m extremely surprised.” 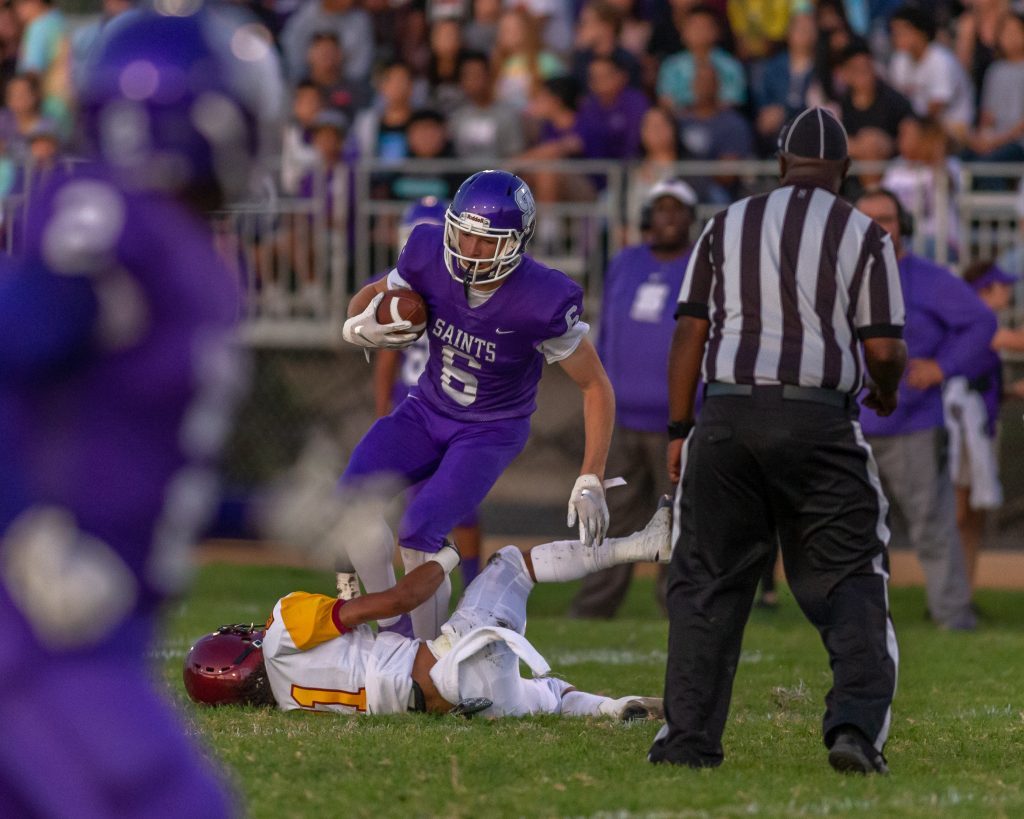 Jenkins was born and raised in Long Beach where he played as many youth sports as possible. He was skiing with this family at two-and-a-half years old, playing tee-ball a year later and basketball by the time was in third grade.

“Obviously my parents wanted me to, and pushed me to do it, but I’m grateful I did because I got to experience it all,” Jenkins said of being a well-rounded athlete. “Each different sport had a different focus on areas of strength and I feel like all of that combined has helped me become a better athlete.”

Jenkins is also an avid scuba diver who is one certification short of being a Master Scuba Diver. He works at a scuba shop owned by a neighbor who also travels with the Jenkins’ to exotic diving locations.

“We’ve traveled to Indonesia and Africa,” Jenkins said. “I’m super blessed to be doing that at this stage of my life, for sure.”

Despite experiencing his own wide world of sports, Jenkins said that football has always been his favorite. He played in the Friday Night Lights flag football league from first to eighth grade, but safety concerns from his mom, Laura, essentially forced Jenkins to concentrate on basketball.

Over three years with the Saints basketball program, Jenkins became really close with the senior class that graduated over the summer, and one of his teammates even lived with the Jenkins family last year. After convincing his mom to let him try spring football earlier this year, Jenkins knew he was meant to be back on the field.

“I told her that I don’t want to have any regrets,” Jenkins said. “I don’t want to miss out on the ability to play high school football. I think it’s a unique experience. Eventually we came to an agreement.”

His flag football background made Jenkins a quick study in coach Mario Morales’ offense, but putting the helmet and pads on in August was a unique experience for him.

“In basketball we have 6 a.m. practices where we run five miles so conditioning wasn’t an issue,” Jenkins said. “It’s definitely different trying to run 110’s and gassers in full pads. It’s just a different experience. It’s a different kind of tired.”

Once Jenkins got his feet underneath him, his natural athleticism took over. He has a team-high 353 yards receiving and seven touchdowns on 15 receptions.

“He has really quick feet for a big guy, I just wish we had him all four years,” Morales said. “I’m surprised he’s taken to our offense so quickly. He understands the game. He’s got a really good attitude. He loves to learn and he asks a lot of questions.”

Jeff Jenkins isn’t surprised that his son has jumped head first into a new activity.

“There’s nothing the kid wouldn’t try,” Jeff said. “He was zip lining at 6-years-old. It’s not his personality because generally speaking in life he’s very cautious, but if you gave him a parachute and told him to jump off a cliff he’d give it a shot.”

Jenkins said his confidence skyrocketed when he caught his first touchdown pass in the season opening win over Valley Christian. 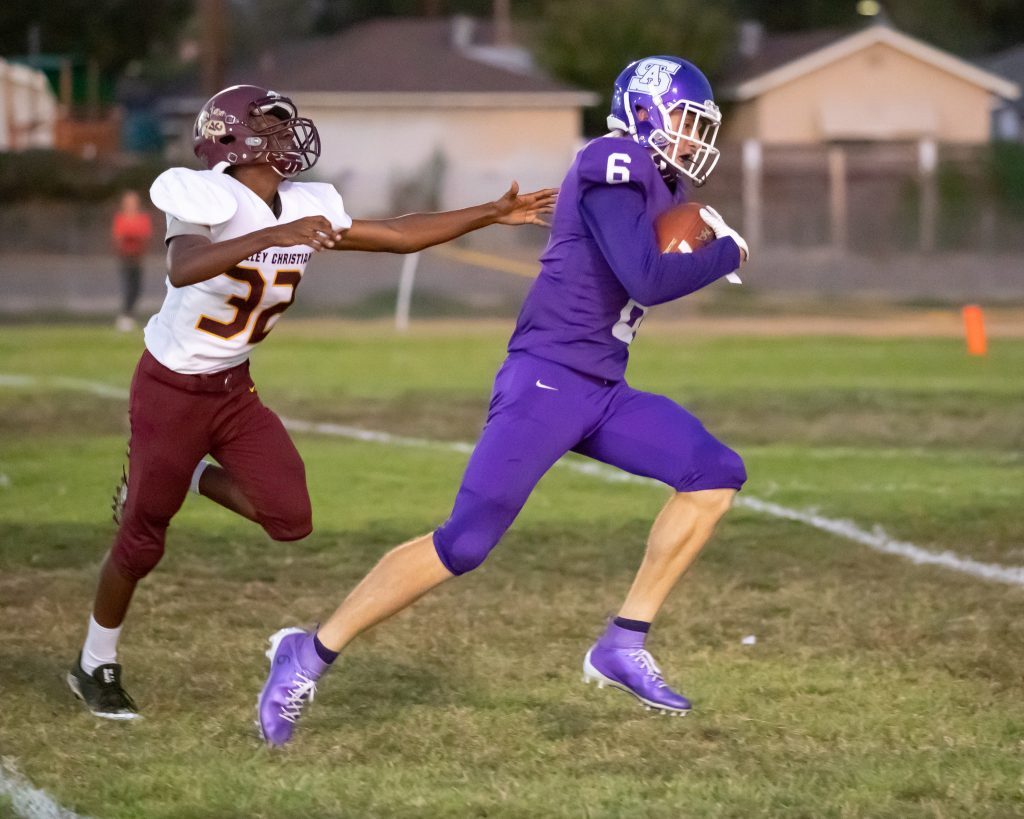 “I have to thank my coaches and teammates first and foremost,” Jenkins said. “Coming into football I was just fundamentally not there. But I’ve been more efficient getting off the line and not getting jammed, and getting on my defenders and blocking. All of my coaches have pitched in and saw a little something to help me out. And I wouldn’t be able to have any success without my teammates.”

Jenkins wants to a pursue a future in football at the next level, but also wants to study Marine Biology and ocean conservation. That makes sense that a kid who just wants to help.

Tonight’s clash between Millikan and Compton at the Rams’ DeHaven Stadium pits two teams desperate for a win against each other. Millikan (2-5, 1-2) isn’t having the season they envisioned with a talented roster. Compton (3-3, 0-2) was hoping to reverse last year’s story of a strong start followed by a tough Moore League, but […]

Rose Cano was nearly unhittable on Tuesday in the wild card round of the CIF Southern Section Division 3 playoffs. The St. Anthony pitcher struck out 18 batters and only gave up one hit in a 5-1 win over visiting Woodbridge at Pan American Park. “When I was warming up my velocity felt really good,” […]