Photo by JJ Fiddler: Soloman Bowie (front left) with the rest of the Wilson defense.

Soloman Bowie’s life came to a fork in the road in March of 2018 while driving with his dad, Theron. He can still vividly recall the seismic emotions of that moment.

“My dad was on the phone with his brother and told him that he was sick and might have a heart attack,” Bowie remembers. “I could tell my dad didn’t want me to hear it.”

His doctor had given Theron a disappointing diagnosis regarding his heart health and he hadn’t yet told his whole family.

“As a father, you don’t say those things for your kids to adjust to you,” Theron says. “We always adjust to our kids. With hard times come blessings.”

“He was crying on the phone,” Bowie says. “I had never seen my dad cry before. Never. Something just clicked in me. If my Dad does leave, I want to make sure that he knows he raised a good son.”

Only Bowie had himself to blame for not feeling like a good son while sitting in the passenger seat that day. He had been raised as part of the Narbonne High football program with his dad coaching the Gauchos defensive secondary, but outside influences were changing the “Solo” Bowie that the Narbonne football knew and loved.

“I had other people trying to influence me into bad stuff and I was doing stuff I wasn’t supposed to,” Bowie says. “I was getting in trouble and getting bad grades because of too many distractions. I was being disrespectful to my mom, I had a bad attitude and I just wasn’t right over there. I needed a new environment. I needed a fresh start.”

That opportunity presented itself when Bowie’s moved from Harbor City to Long Beach to live with extended family and enroll at Wilson High. Less than a year later, the defensive back was voted as a team captain for the Bruins football team, and tonight he’ll lead his new teammates and brothers onto the field as Wilson tries to move to 4-0 for the first time since the 1960’s.

The Bruins, who are ranked No. 1 in the most recent CIF Southern Section Division 7 poll, are traveling to Clark Field tonight to take on St. Anthony in the Battle For 7th Street rivalry. Kickoff is scheduled for 7 p.m. 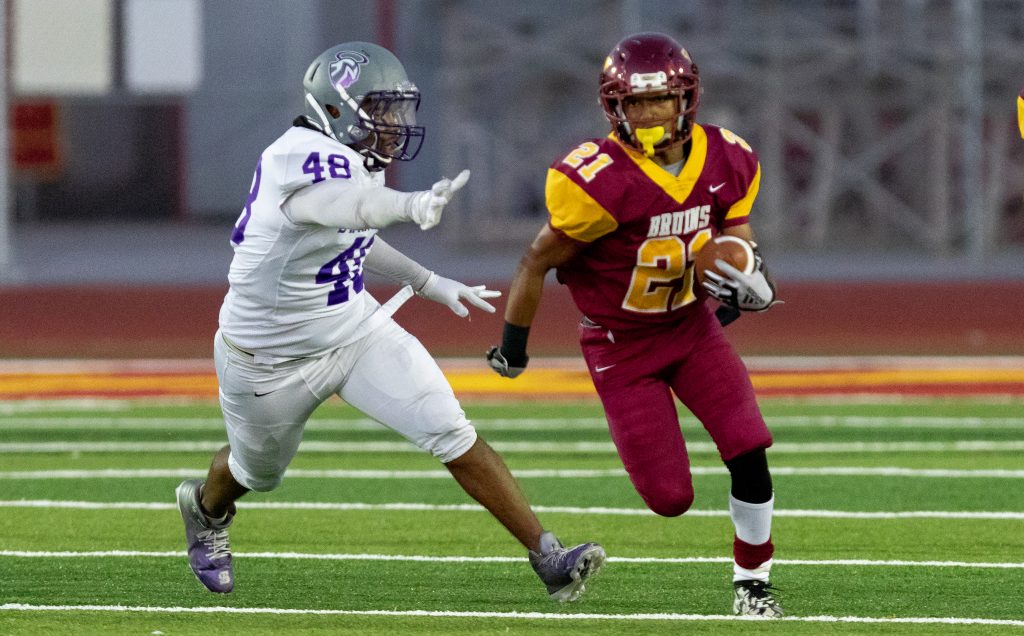 “I wanted to transfer to Wilson because I wanted to make my parents proud,” Bowie says. “When I got here I was all business. I didn’t care about making friends, I was just focused on getting it done for my family and for my team. Just getting on the right track.”

Bowie has been on track to be a football star for his entire life, or as he puts it, “I was born into football.”

The Bowie family tells stories about how Soloman saw his first football game on TV as a toddler, and didn’t move while watching intently until the final whistle. He began playing flag football when he started school, but by the time Bowie was in third grade he was the starting running back on his Tri-City Falcons youth football team.

“My dad had me over there at Narbonne for practice all day every day,” Bowie recalls. “So I just grew up in the atmosphere and started loving football.”

“He jumped right in and wasn’t shy,” Theron says. “One of my favorite times was when we were coaching an All-Star game and he was at every practice with his equipment on. He was in the mix with these big old high school kids. The kids loved him. When kids come back to Narbonne they ask about him all of the time.”

Bowie says he never thought of himself as a really good football player, but everyone else could immediately see his natural athleticism and instinct for the game.

“We always had good players on my teams, so I was just trying to play my role and work hard,” Bowie says.
That humble attitude comes from Theron, who said he was harder on his son when he was his youth football coach so that other parents didn’t think he was showing favorites. However, sometimes a bond between a father and son is just too strong.

“So one time we were at Santa Monica and leading by one point but they were driving,” Theron says. “(Soloman) intercepted the last pass and was running down our sideline. I forgot I was the coach, instantly turned into a dad, and I was running parallel with him down the sidelines. They finally tackled him at like the 15-yard line and I dadgum near jumped in the pile, picked him up and put him on my shoulders celebrating. I just forgot I was the coach. It was one of those great moments.”

It looked like the Bowie boys were going to have more of those moments as Soloman impressed on the lower level teams at Narbonne during his freshman and sophomore years. But the trouble came fast for Bowie, and the epiphany came even faster.

“You never know when it’s the last time you’re going to see your parents,” Bowie says. “I love my Dad and he’s been a big influence on my life. The stuff that I was doing (outside of football) was nothing my parents taught me. Just to think that he wouldn’t be in my life anymore I was like, ‘I gotta go get it especially so he can come see me play football’ because I just have to make him proud.”

So far, Bowie has done that on and off the field as a team captain.

“I knew he was going to be a stud,” fellow Wilson senior captain Logan Ziegenhagen says. “When he came into the program he showed he was a leader right away. He was leading by example in the weight room. He was the hardest guy working every day. And he was always running the drills, trying to impress the coaches.”

Wilson coach Mark Ziegenhagen said that Bowie’s “Narbonne swag” was something that helped improve his team.

“He was very boisterous,” Ziegenhagen says of Bowie. “Once everyone got where he was coming from they started liking it. He loves those challenges and he tries to challenge the best guys. He spends time after practice with guys. Yesterday he was running on his own after practice. He does the little things you hope other guys incorporate themselves.”

It’s not surprising that the son of a football coach is a good leader on the football field, and Bowie said it comes naturally.

“I honestly feel like it’s a God-given blessing,” Bowie says. “When I was getting in trouble I had people telling me, ‘Solo, stop being a follower’ and here it’s just clicked for me that I’m not a follower. I needed to stop doing follower things. I saw a chance to make an impact on this team, and I went after it.”

There is no question that Bowie was one of the better defensive backs in Long Beach last season as a junior. The crafty defensive back finished the year with 80 total tackles, three pass deflections, two interceptions and two sacks in eight games. Bowie was named All-CIF Southern Section Division 6 for his efforts. 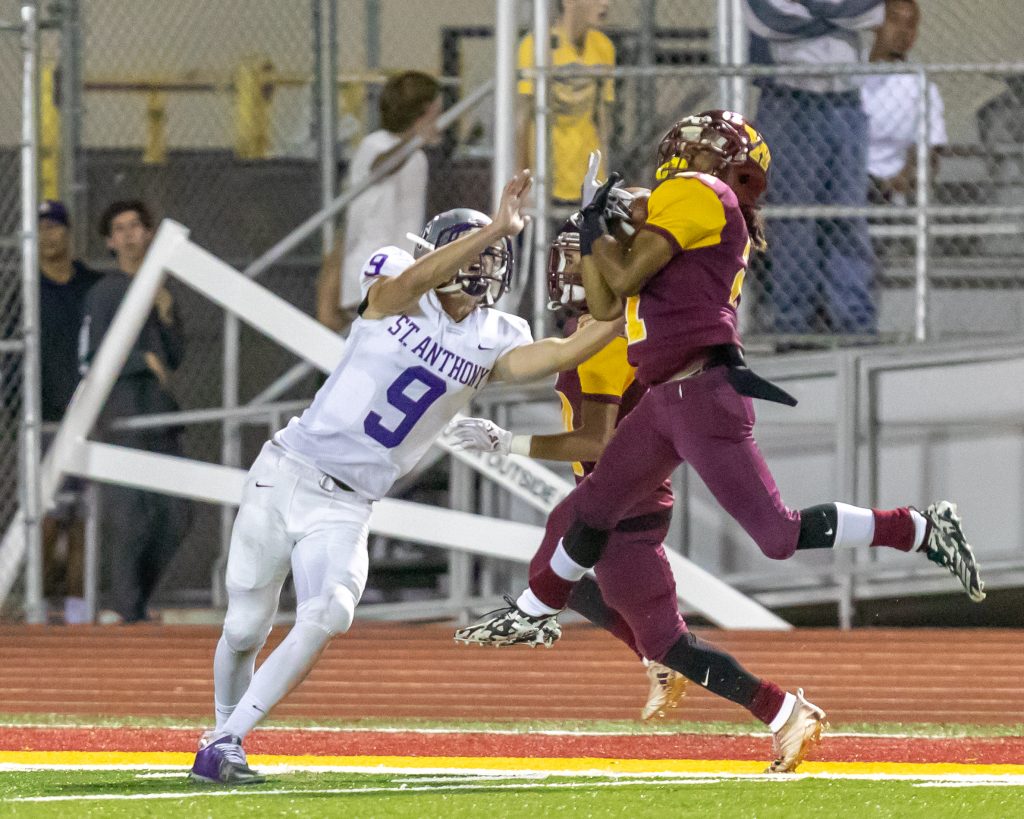 “He’s an old school player in a young body,” Wilson defensive coordinator Matt Kimbrough says. “His mindset is totally different from an average high school kid now. He’s strong-willed and he pushes everybody to work hard. Even when he’s hurt he’s making sure he’s all in for his players and making sure they get the best out of him when he’s not even on the field.”

Bowie proved that during the season opening win at Mayfair last month. He injured his ankle during off-season workouts and had to miss the game. Instead of sulking on the sidelines, Bowie shook off his own disappointment and was a vocal leader for Wilson. He would call out defenses and follow the defensive staff around to hear the play call and add his advice.

“On the bus ride to Mayfair I was holding my tears back,” Bowie says. “But I told myself to suck it up and be a captain. You have to show your teammates how to be when you get injured and keep composure.”

Theron’s health is holding steady, and he has taken the year off from coaching Narbonne in order to stay healthy and attend all the Wilson games this season. Bowie already has three of the 10 turnovers forced by the Bruins defense.

“I love watching my boy play, so last year was tough,” Theron says. “I was not going to miss his senior year.”

Pro Bowl voting has officially opened at NFL.com, and there are six Long Beach products on the ballot, including a few trying to make history. JuJu Smith-Schuster and Jayon Brown, both Poly alums, will have a decent shot to get their first Pro Bowl honors while DeSean Jackson and Jurrell Casey are aiming for their […]

The562’s coverage of Cabrillo Athletics is sponsored by the Cohn Family. Cabrillo opens the 2022 football season at home on Friday night, welcoming in the Hawkins Hawks. This will be a rematch from last year’s season opener, which was the head coaching debut for Cabrillo’s Shane Gonzales. The Jags ended up on the wrong end […]

You can support Wilson High tennis program at Legends Sports Bar and Restaurant on Saturday from 8-10 a.m. with a $10 pancake breakfast and silent auction. The US Open will be on the big screens during the all-you-can-eat buffet with pancakes, eggs, sausage, bacon, orange juice and coffee served by the junior varsity and varsity […]