Like every year for the last 130 or so years in Long Beach’s history (football games were played here before the city even officially formed), 2018 was a memorable one for sports. As it draws to a close, we look back on the top 10 sports stories from the last 12 months.

There are almost 600 high schools in the CIF Southern Section, and only eight in town, including the Moore League and St. Anthony. But proving that Long Beach is one of the best places for high school basketball anywhere in Southern California, the city is home to two of the best basketball programs anywhere in the CIF. For the first time this year, both Long Beach Poly and St. Anthony’s boys’ and girls’ teams made the cut for Division 1, the top bracket. That’s a testament to both schools’ commitment to their programs. 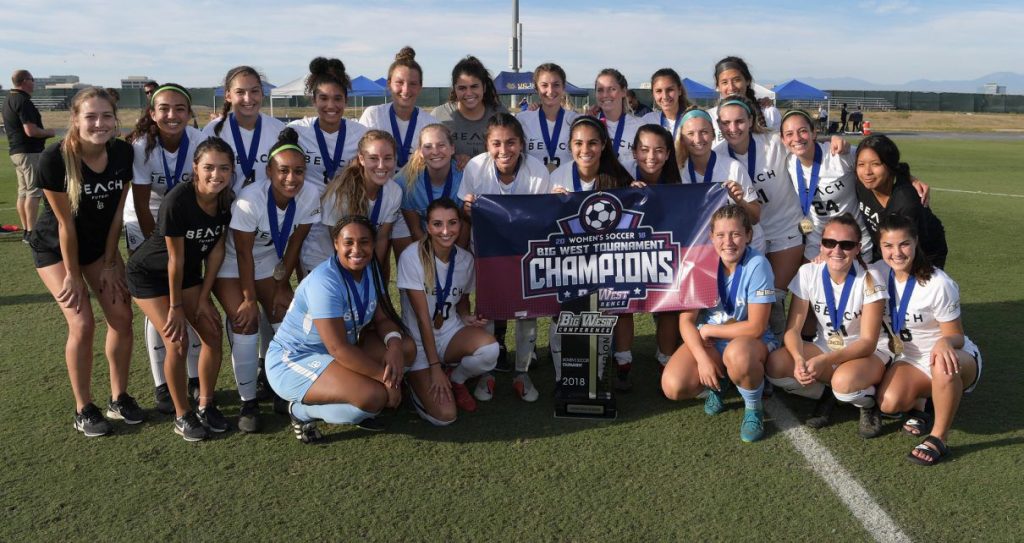 LBSU has won six of the last eight Big West Commissioner’s Cup titles for being the best athletic department in the conference because the women’s teams on campus were dominating the local competition. Although the Beach lost its spot atop the standings last year, the women’s teams on campus are still leading the way. LBSU women’s soccer, track and field, golf and softball all made history last year while winning conference titles. 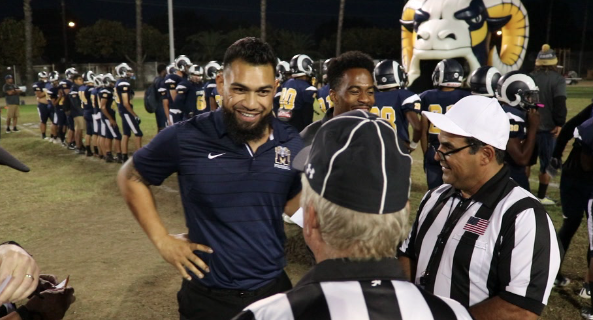 The local high school football coaching carousel continued to spin this year in the Moore League. The season started with first-year head coaches taking over at Long Beach Poly, Jordan and Cabrillo. It ended this month with two more coaching changes to two more schools.

Millikan’s Justin Utupo was the first to make news when he resigned earlier this month. The Rams were 1-9 in 2016, the year before Utupo became head coach. In his two seasons at the head of the program, Millikan has gone 17-6 with a 10-2 Moore League record, and a pair of playoff wins. It’s the most successful two-year stretch for the Rams since their CIF-SS championships in the late 1970s and early 1980s.

Lakewood also changed coaches, and former Jordan and Wilson coach Scott Meyer will be returning to the league. Meyer spent six years at Jordan, taking a 1-9 team in 2006 to a 7-3 record in 2008 that included a win over eventual CIF-SS Division 1 semifinalist Lakewood, as well as Moore League Player of the Year honors for NFL player John Timu. 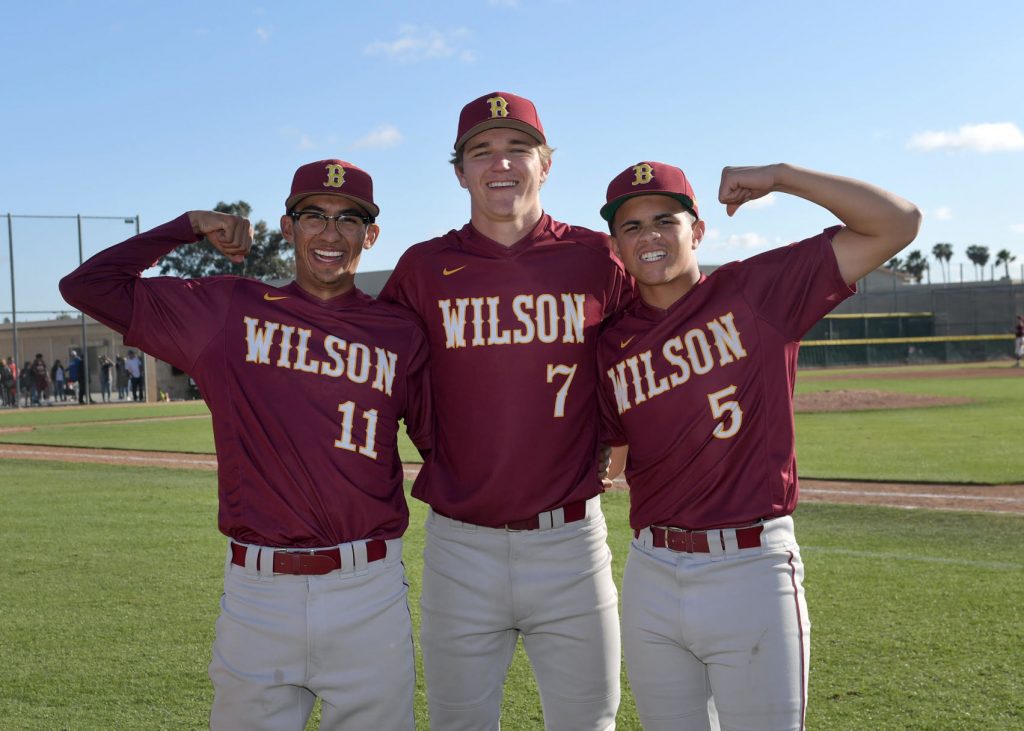 Not all CIF playoff runs are created equal, and the Wilson baseball team had an extraordinary postseason last spring. Wilson returned to the semifinals for the fourth time in the last 12 years by delivering one of the strangest quarterfinals wins Long Beach has ever seen. Ryan Pettway, Nick Endres and Aiden Alaniz combined to no-hit the Bellflower Buccaneers on the road in a 4-2 victory.

“I’ve never coached a no-hitter where we’ve just barely won like that,” Wilson coach Andy Hall said. “I said we were going to win by one or lose by one — it’s a silly game, and weird things happen. I’m pleased for our guys, we grinded it out.”

The Moore League hadn’t sent a team to the semifinals since Chase De Jong and Shane Watson led Wilson and Lakewood there, respectively, in 2011.

Not only did Randy Gonzalez Jr. win a CIF-SS championship in his senior season, the Lakewood wrestler also finished third at 285 pounds at the CIF State meet. He then went on to place third in his weight class at the National High School Coaches Association National Events in March in Virginia.

Gonzalez Jr., who had lost in the CIF-SS finals as a sophomore and as a junior, pinned all five of his opponents at Carter High School in Rialto to win the championship. It is the fourth CIF title for the Gonzalez family. Gonzalez’s older brother, Zack, won last year. His coach and dad, Randy Sr., won back-to-back heavyweight titles in 1985-86.

“It feels really good because growing up all I heard about was my dad and brother’s success,” Gonzalez Jr. said. “I’m proud to be able to contribute to the legacy.” 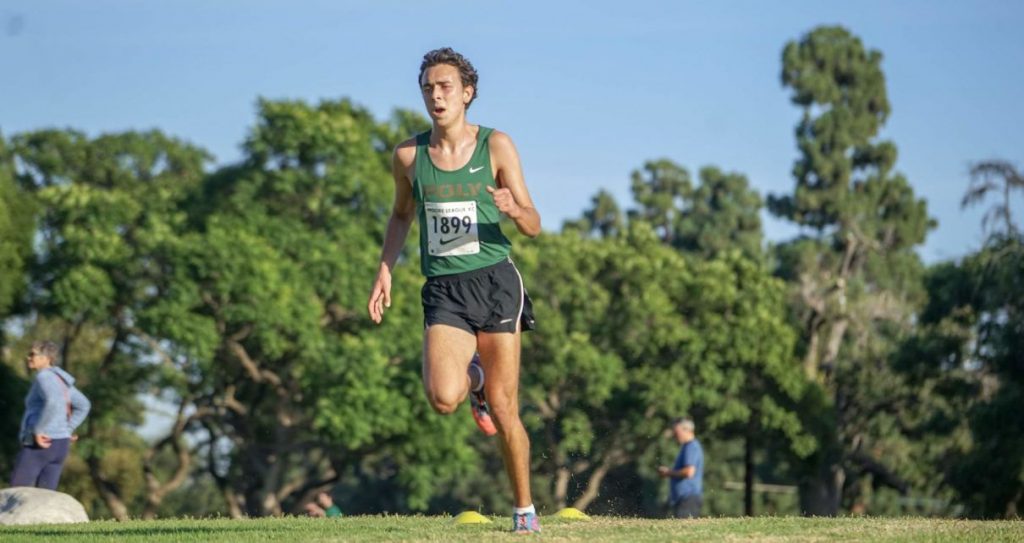 Long Beach Poly senior cross country star Will Frankenfeld did something hard to do this year: he made history in a city that has a long, rich history of producing star distance running talent. Nobody’s done what Frankenfeld did in 2018, though, starting with rewriting the Moore League record books en route to another individual title. He then went on to win the individual CIF-SS championship, something no one had done in 18 years, and finish third at the CIF State meet. He became the first male runner from Long Beach to qualify for the Footlocker Nationals, where he was the top finisher from California and third finisher from the entire West Region, leading the West to a team championship. 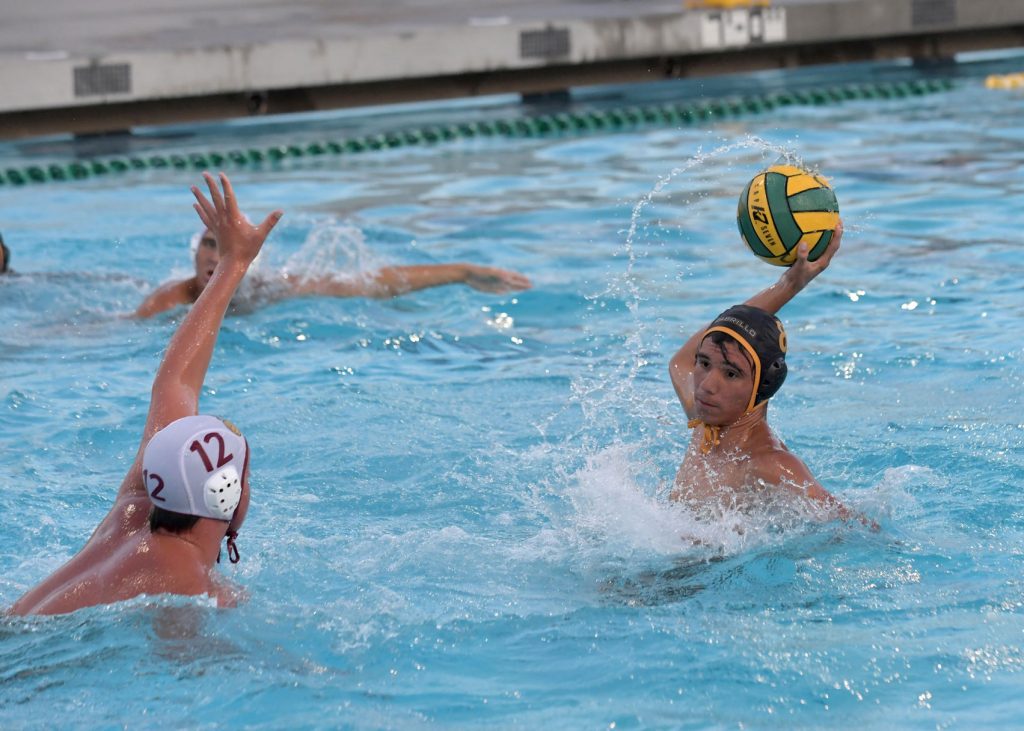 Cabrillo boys’ water polo is the best team in Long Beach you’ve never heard of, and the Jaguars reached the first CIF semifinal in school history in November. Cabrillo was ranked in the top-10 of Division 7 all season, and won two playoff games before hosting Cathedral in the semis at Belmont Outdoor Pool. The Jaguars fell 13-8.

“This is a family and we’ll never forget this season,” Cabrillo coach Lawrence Durnad said. “We played one of our best first halves of the season tonight, but Cathedral had more experienced players in this situation and our warriors couldn’t pull us though.”

Senior captains Cory Thompson and Angel Ortiz added to the legend of this season by becoming the first players to earn All-CIF awards.

“Every year, most people here don’t know how to swim,” Thompson said. “We train them throughout the summer and work at a higher level to get everyone up to speed. They have to learn how to egg beat and everything. It’s a really good experience, and I really wish more people would come and try out.” 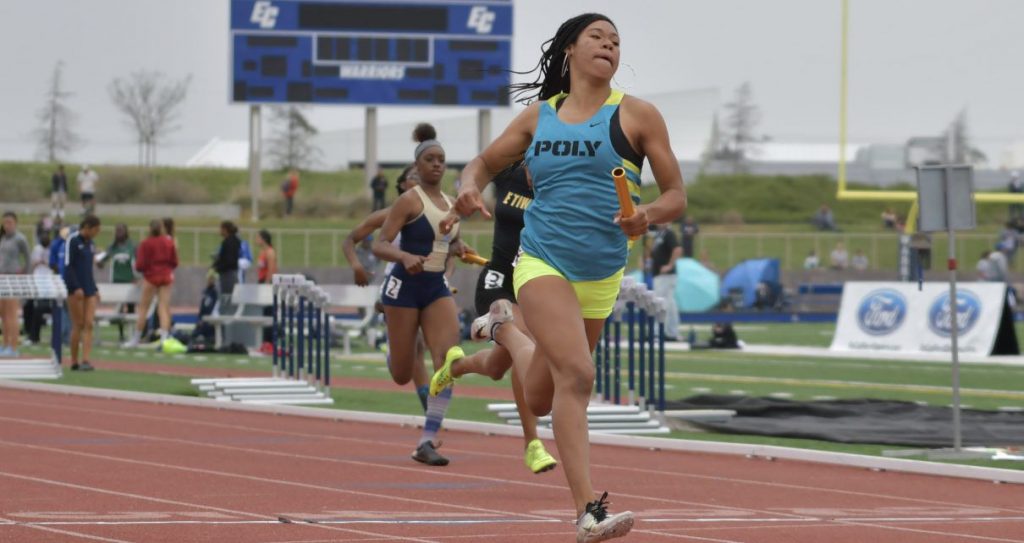 As always, the city of Long Beach showed out this year in track and field. Wilson sophomore Rachel Glenn was the year’s breakout star, winning an individual state championship in the high jump with a 5′-10″ leap. She wasn’t the only big story in Clovis, as Wilson’s 4×400 boys’ squad took third, Poly’s boys’ 4×100 took fourth, and Poly’s girls’ 4×100 took fourth as well. Poly’s LSU signee Ariyonna Augustine won a bronze and a silver in the 100 and 200, and junior Kenya Payne was fourth in the 300 hurdles. St. Anthony freshman Asjah Atkinson continued her remarkable debut season by making the final in the 100 hurdles, finishing seventh.

With plenty of returning talent and some bright new stars, 2019 figures to be an even better season for Long Beach’s runners and leapers. 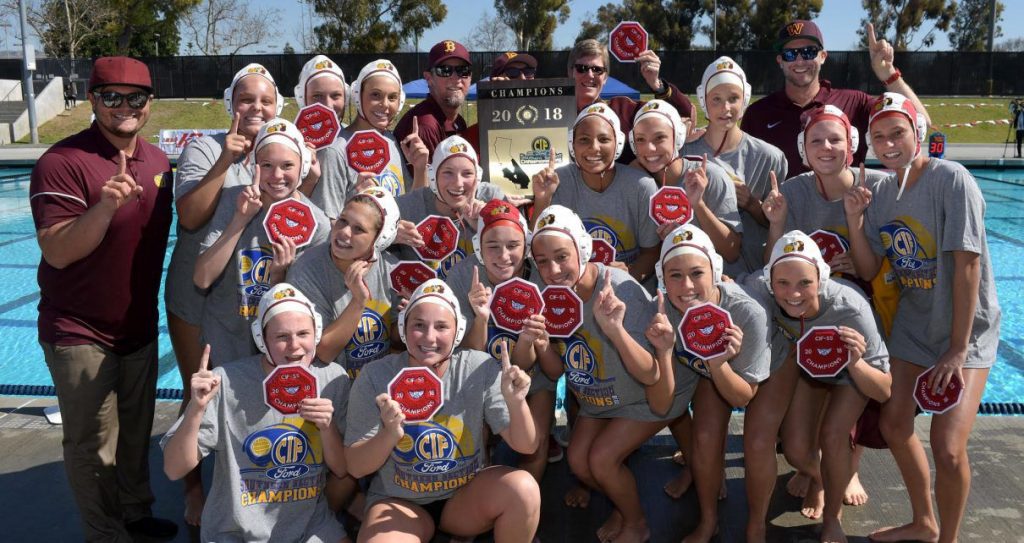 There has never been a better year for girls’ water polo in Long Beach than 2018. Prior to this year, the city had only one CIF championship appearance in the sport, a loss by Wilson. This year both Long Beach Poly and Wilson made it to the championship in Division 4 and Division 3, after a thrilling historic league championship that saw the Jackrabbits beat the Bruins for the first time. It was Wilson fans who laughed last, however, as Poly lost their CIF title game in overtime while Wilson won a narrow victory to bring home the city’s first golden CIF plaque. The Bruins didn’t graduate any starters from that team, meaning that 2019 may be even more special. 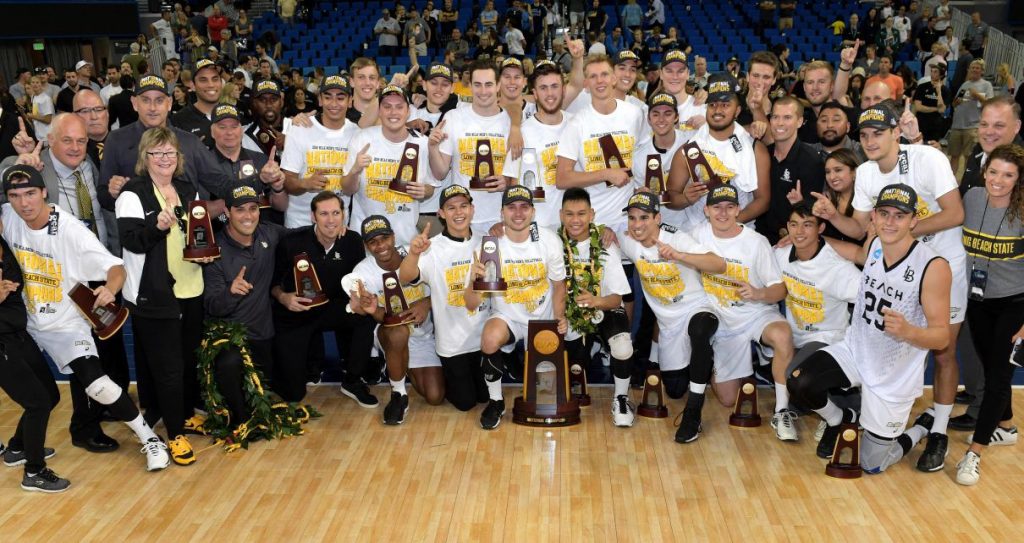 It didn’t take much deliberation to figure out this year’s top sports memory. For the first time since 1998, Long Beach was the champion of the NCAA, as the Long Beach State men’s volleyball team beat UCLA in a five-set thriller in front of more than 7,000 fans to take the national championship.

At this fall’s American Volleyball Coaches Association conference, the buzz was still in the air about the match, which is already considered one of the best in NCAA men’s history. Just as entertaining was the postgame celebration, as the team’s bus was picked up by a police escort and led to a jubilant celebration. No fan who was there will soon forget watching a Long Beach squad rush the floor at Pauley Pavilion to celebrate a wild, entertaining championship.

Behind The Scenes Of Jordan Bell, Warriors NBA Title

When Jordan Bell’s draft rights were acquired by the Golden State Warriors last summer, talk immediately began about the possibility of the former Long Beach Poly star winning an NBA title in his rookie season. Last Friday night that’s exactly what happened as the Warriors completed an NBA Finals sweep of LeBron James and the […]

LBCC Football Pushes No. 1 Riverside To The Brink

The LBCC football team suffered a heartbreaking loss that was also incredibly encouraging for the Vikings and their fans on Saturday night. Playing on the road against No. 1 Riverside–the top-ranked team in the nation–LBCC led for most of the second half until falling on a touchdown pass with 25 seconds left, losing 31-28. “Very […]

You would be hard-pressed to find anyone in the city of Long Beach with a better understanding of collegiate athletics than Bill Husak. As a member of the community for over four decades, Husak was a professor and department chair at Long Beach State, spent 20 years as the Athletic Director at Loyola Marymount University, […]