With eight players in the NFL including two dominating the highlight reels, this is a new golden era for Long Beach Poly football fans. Yes, there have been plenty of Jackrabbits in the league before, but what’s happening this year is special, and Poly fans had better be savoring it.

Poly alums DeSean Jackson and JuJu Smith-Schuster are two of the NFL’s top five receivers in terms of production so far this year. Jackson, at 31 years old, leads the NFL with nine catches for 275 yards and three touchdowns, with a league-leading average of 30 yards per catch. Smith-Schuster has 18 catches for 240 yards, fifth-best in the NFL.

Jackson’s 75-yard touchdown catch against the Eagles Sunday was a special one, coming as it did against the team he spent most of his career with. It also tied him with Jerry Rice for most-ever touchdown catches of over 60 yards with 23.

“That was for my Pops,” said Jackson, who lost his father a few years ago to pancreatic cancer. “We talked about this, when I was younger, being legendary and leaving something for the league to say I made my mark. I still got a lot of ball left in me.”

Jackson lent quarterback Ryan Fitzpatrick his postgame wardrobe after seeing the QB (who leads the NFL in passing) heading to the podium in a regular-looking outfit. Instead Fitzpatrick took the podium in Jackson’s chains, sunglasses and tight jacket with the zipper down halfway and his chest hair out for the cameras.

Jackson is now just 238 yards away from the 10,000 career receiving yards mark.

The Tennessee Titans got their first win of the year with a strong defensive effort against the Texans, good news for the two Poly alums on the Titans D. Jurrell Casey got a pair of sacks, the 40th and 41st of his NFL career, each of which also come with a $999 donation from Casey to Starlight, a charity benefiting hospitalized children. Jayon Brown had two tackles for the Titans.

Kaelin Clay had two punt returns for the Giants but left the game with an ankle injury; he’s expected to be available this week. Marcedes Lewis’ Green Bay Packers tied with the Vikings, with Lewis playing half the Packers’ snaps in a blocking capacity. Jamize Olawale and the Cowboys picked up a big win on Sunday night.

Bruins alum Joel Bitonio has been laboring away in Cleveland for the Browns, as part of a franchise that went 0-16 last year. This season the Browns have a tie and, after last week, a loss. They’ll look for their first win at home Thursday night against the Jets.

Panthers alum John Ross had one catch for eight yards in Cincinatti’s Thursday night’ win over the Ravens.

Lancers alum Matt Pryor didn’t get a chance to play for the Eagles as he was listed as inactive for the second week in a row.

Tarbabes alum Datone Jones is on the injured reserve list for the Cowboys.

Click here for all of our LB In NFL columns updating you on all the local pros! 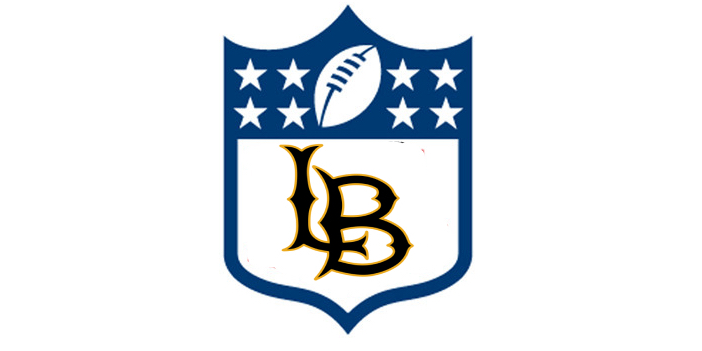 All of The562’s cross-country coverage for the 2021-22 school year is sponsored by Bryson. Visit BrysonFinancial.com to learn more. Last season’s Moore League girls’ cross country championship was a memorable and historic race for a number of reasons. That race is not traditionally run at Cabrillo High School in late March, and the unusually warm temperatures […]

The Wilson girls’ golf team all but clinched a 10th consecutive Moore League title by beating Millikan 223-233 on Tuesday at Recreation Park Golf Course. The Bruins (10-10, 6-0) were led by freshman Emi Sverduk who earned the medalist honors with a 2-over par round of 40. Junior Emma Royle shot a 41 for Wilson.