Friday’s memorial for Long Beach Poly football, basketball, and baseball legend Willie Brown began, fittingly, with a round of applause. The memorial took place in the Poly auditorium and, as the pastor pointed out, Brown was accustomed to hearing cheers as he crossed the line into the end zone or rounded third and headed towards home, a part of CIF titles at Poly in football and basketball, and national championships at USC in football and baseball.

“All of us who came behind him had big shoes to fill,” said Poly basketball coach Shelton Diggs, Brown’s nephew.

Even if someone didn’t know of Brown’s legacy, it would be obvious he was a Hall of Famer just from the lineup of speakers for his memorial. Pastors from multiple churches helped move the service along and luminaries like Vice Mayor Dee Andrews, USC athletic director Lynn Swann, and Poly legends Dave Levy, Darnell Bing, and Darrell Rideaux all paid tribute, in addition to remarks from the family and LBUSD board member Felton Williams.

Andrews was overcome during his part of the ceremony.

“Wilie was not a friend, he was a brother from another mother,” said Andrews, recalling being five years old and attending Willie’s third birthday party as one of his first memories.

“My brother was always better than me at everything, and I’m so glad he went to Carson because now I get to be a councilman in Long Beach,” said Andrews during a moment of levity. “If he’d stayed he would have been the mayor.”

Swann made the trip from Los Angeles and said Poly already felt familiar to him because of all the stories he’d heard about the place from Brown. “Willie never forgot about the high school and the community that he came from,” said Swann.

Levy coached CIF championships at Poly in 1958 and 1959 and said people underestimate how talented those Poly teams were, with Brown standing out as the most talented of all in 1959 when he won CIF Player of the Year.

Bring and Rideaux both spoke of Brown’s role as a mentor to them when the two were Jackrabbits playing at USC, following in Brown’s footsteps.

“It took him nine months to tell me who he was, he was so humble I never knew he was a Poly legend,” said Bing, who said Brown’s mentorship was particularly important to him when he retired from the NFL and was transitioning into his post-football career. “His faith in me allowed me to regain faith in myself.”

“He epitomized to me what it meant to be a scholar and a champion,” said Rideaux.

It was a fitting celebration of a local legend by the people who knew Brown best. And their appreciation was heartfelt and genuine–one speaker said that the round of applause wasn’t good enough for Brown, and asked the crowd to give him a standing ovation. The several hundred friends, family, and fans gathered did exactly that. 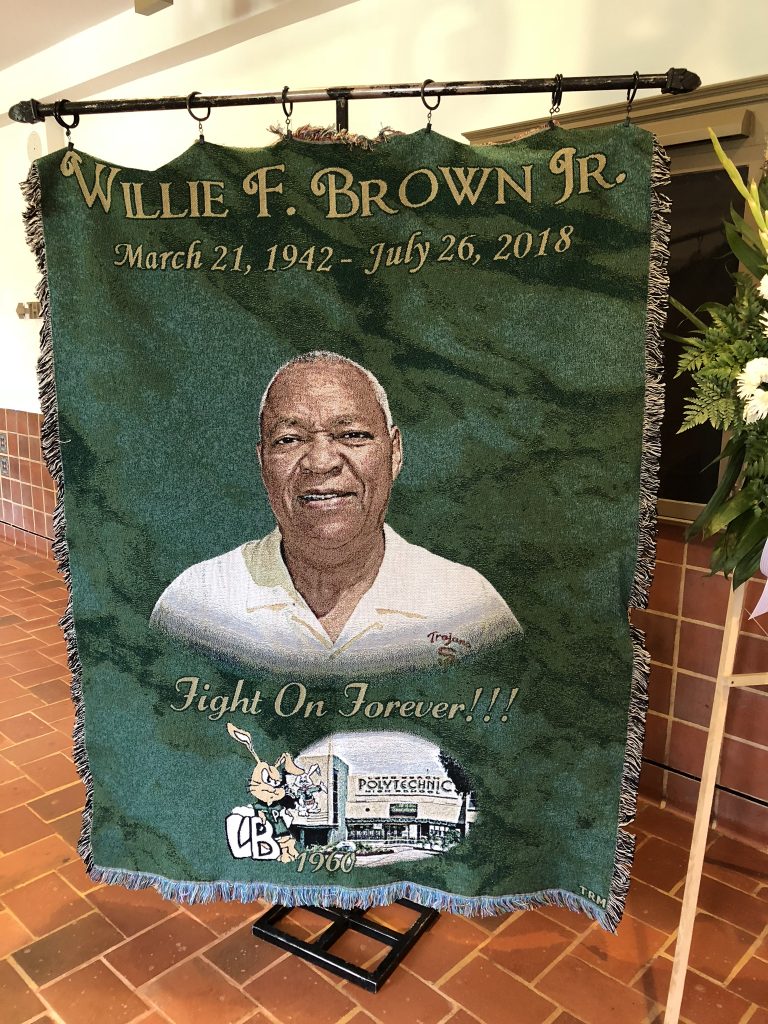 Compton def. Wilson 73-57 Compton (9-4, 2-0) didn’t have much trouble with Wilson as the Tarbabes continue to look like this year’s top challenger to Long Beach Poly for the Moore League throne. Compton will host the Jackrabbits Thursday evening at 6:30 p.m. Jabari Steward helped pace Compton with 13 points. Millikan def. Jordan 56-25 […]

It looks like Wilson still has everything it needs to win a 15th consecutive Moore League title after the graduation of three-time Moore League individual champion Tyler Schafer. He helped the Bruins win two CIF championships in the last four years, and coach Jeff Evans said this whole team will have to play its best […]