Long Beach is known for producing championship-caliber athletes and teams—but also for its hearty celebration of its own. When Wilson’s football team beat Poly for the first time in the 1940s, the Bruins literally paraded down 2ndStreet with their marching band and spent the entire night celebrating.

The Long Beach State men’s volleyball team has been going through a similar treatment in the two weeks since they won the NCAA title.

The celebrating began that evening as the team made the trip down the 405 from UCLA. While they celebrated on the bus, a small group of Long Beach Police Department officers were lining up at the Bellflower exit, sirens on and flashing. They escorted the bus from the freeway down to EJ Malloy’s.

“I didn’t know what was going on at first so when I saw all the lights I was like, ‘Are we getting pulled over?’” said head coach Alan Knipe.

When the police escort and the bus reached EJ’s, there was a line of fans outside cheering for the team as they pulled in. As they stepped off the bus confetti rained down on the players and coaches. The party lasted well into the night, with fans and community members taking pictures with the NCAA trophy—at one point Fourth District councilman Daryl Supernaw was standing by it offering to take cell phone shots for anyone who wanted one.

After the champagne toasts were done at EJ’s, the team had a few days to recover before being honored at a Dirtbags game the following Saturday. The team and coaches signed commemorative championship posters for hundreds of fans before the game and then did a ceremonial “first serve” instead of a first pitch. Later in the game the entire team was walked out along the third baseline and received a standing ovation from the large crowd on hand.

The tour didn’t end there, as the team was recognized at last week’s Long Beach City Council meeting, where mayor Robert Garcia read a proclamation for the team before all the councilmembers invited them to the floor for a photo.

The team went straight from the council meeting to their end-of-season banquet, where the team recognized its seniors and plenty of fans began talking about hopes for a repeat, with five All-Americans returning next year and the Pyramid playing host to the Final Four.

For now, the team is still celebrating. Knipe said future visits may be in the works for a trip to Sacramento or even to Washington, DC. Meanwhile, All-Americans TJ DeFalco and Kyle Ensing are off to China as members of the USA National Team, and will compete this summer with the team in the World Nations League.

Who knows? The celebration may still be rolling by the time they get back. 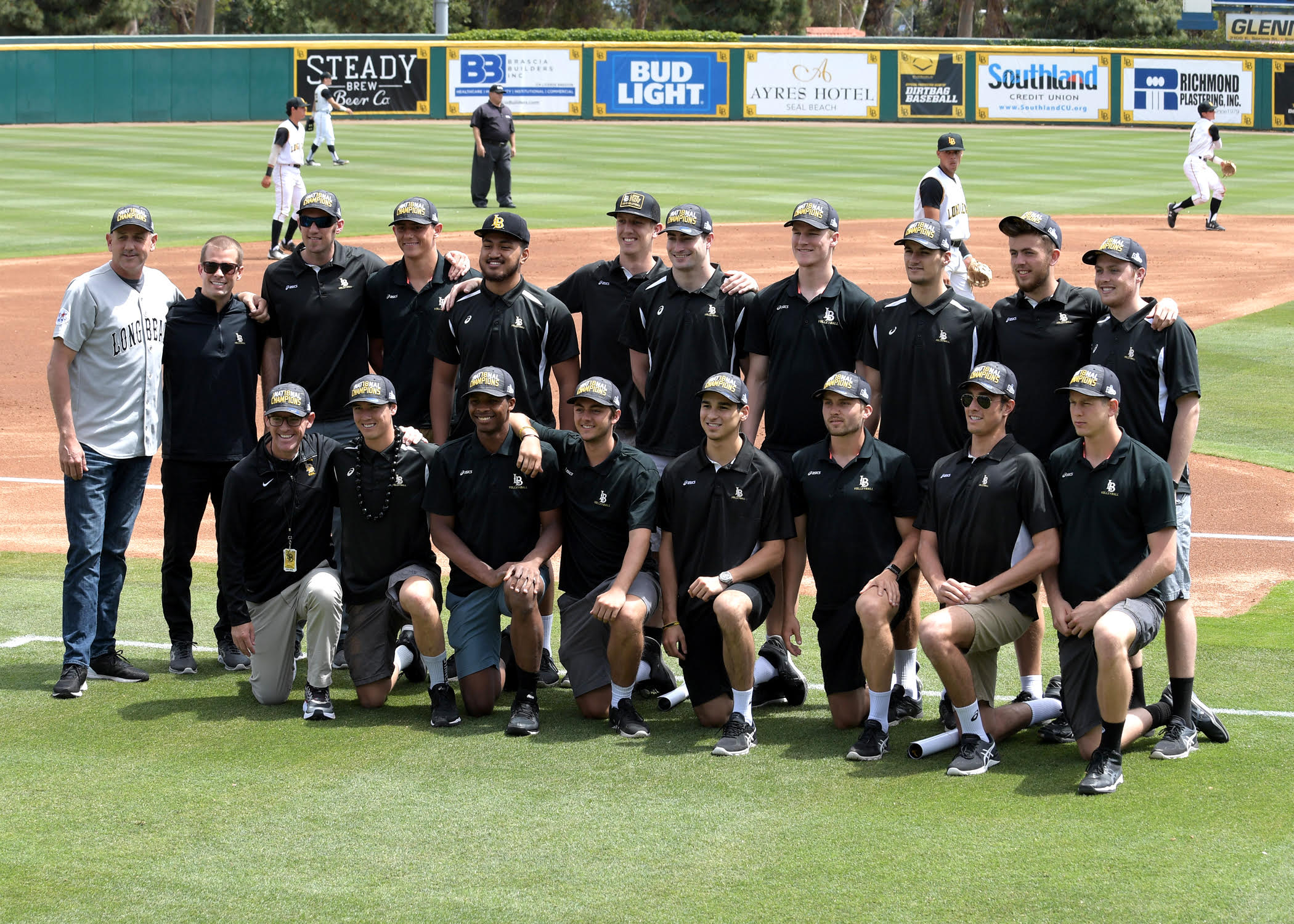 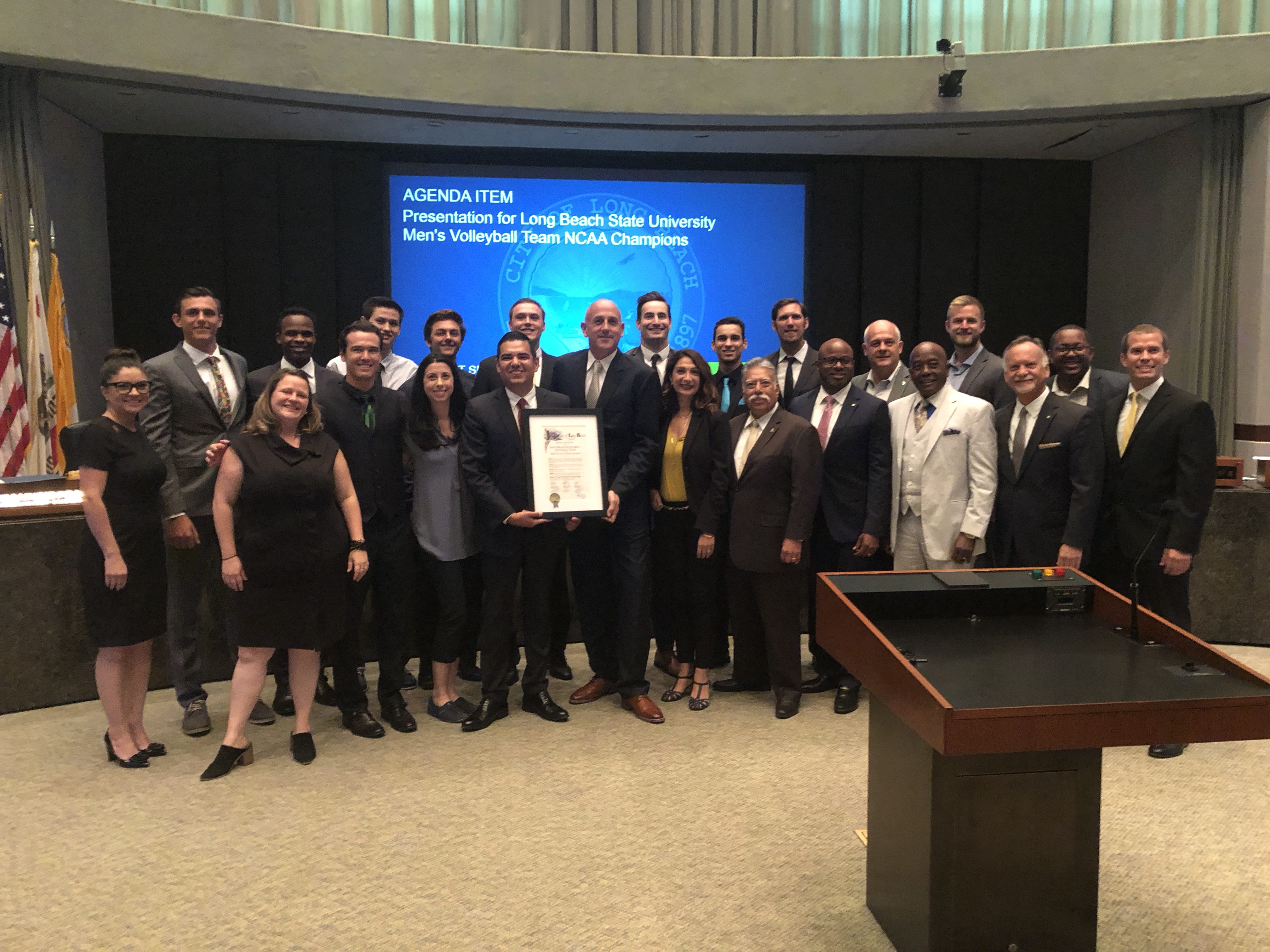 Long Beach State men’s basketball had plenty of chances to beat visiting Oregon State at Walter Pyramid on Sunday afternoon, but after the teams traded runs in the second half, a possible game-tying 3-pointer from Deishuan Booker went long as the Beavers survived for a 75-72 victory. NCAA Basketball: Long Beach State vs. Oregon State […]

The No. 3 ranked Long Beach State men’s volleyball team (4-0) couldn’t have asked for a better start to their season. After a trip to Chicago last weekend saw The Beach take down No. 7 Lewis and then-No. 9 Loyola Chicago, they returned home to the Walter Pyramid for yet another ranked showdown, this time […]

Long Beach State split its season opening series with Sanford on Friday at the LBSU Sand Courts 3-2 and 1-4. LBSU pair Skyler Germann and Alice Pratesi bounced back from a first set loss to take their No. 4 match 18-21, 21-17, 15-8 and were the only LBSU pair to win in the second contest. […]