Christian Watson has heard it over and over the last few years: “Peyton Watson’s little brother.”

On the road in the Division 2AA quarterfinals and semifinals, the Long Beach Poly senior guard heard it from opposing student sections, jabs about his older brother being a McDonald’s All-American, and a bigger recruit than Christian.

For Christian Watson, this season has been about stepping into his own sunlight and forging his own legacy among the storied history of Long Beach Poly basketball, which has produced 20 CIF-SS titles, more than 100 NCAA Division 1 players, and seven NBA alums. The Jackrabbits (and Watson) have a chance to etch their name in the history books with a win tonight at Village Christian in the CIF-SS Division 2AA title game.

As for the road fans?

“It’s funny when I get the chants because the same people who chant that stuff DM me after games or ask me for a picture,” said Watson with a laugh.

Watson and his family had so many dreams and hopes for his senior season with the Jackrabbits, and absolutely none of them looked like what ended up happening to start this year’s story: he severely sprained his ankle in the first quarter of the first game.

“It felt like all the work and all those goals went away, it was disappointing,” said Watson. “It hurt.”

During a month-plus of rehabbing, he watched his team develop without him, with freshman Jovani Ruff taking over a big chunk of the scoring burden, and other seniors on the team step up as well. 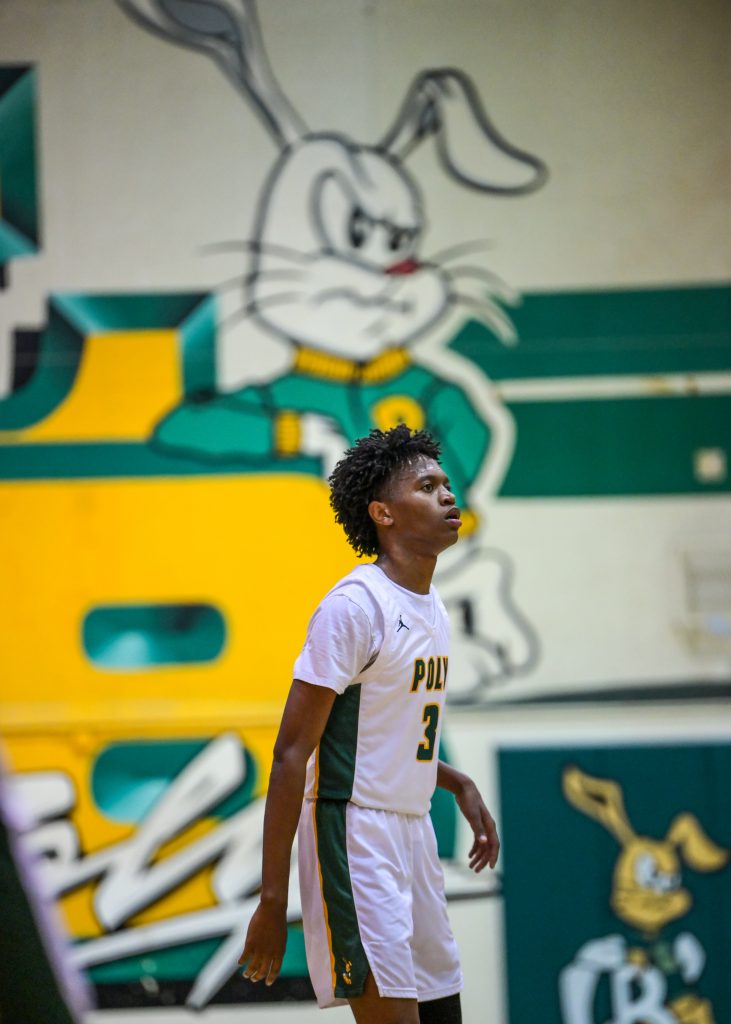 “I could just see us getting better every game, Jovani thriving, Budda (Henry) killing,” said Watson. He was happy for his team but frustrated for himself, eager to get back on the court but knowing that he was likely to miss half the season.

Then, a few COVID-19 positive tests shut the team down for two weeks, which ended up being a blessing in disguise for Watson. The first weeks of the Moore League schedule were moved back, and he ended up not missing as many games as I feared.

“I think when I came back, with everyone having that extra experience, it really meshed together and that’s what really made us take off,” he said. “Ever since, we’ve been killing it.”

Indeed, the Jackrabbits have won 16 of 17 games since Watson got back on the court. The team’s signature has been its defense, holding all four opponents in the playoffs under 50 points. It’s obvious watching them play that there’s a strong chemistry in the group, something that head coach Shelton Diggs said was intentionally fostered.

“I knew that this senior class was going to be a good class when they came in as freshmen, and they all played on that freshman team together because I wanted them to develop together on the court,” said Diggs. “I think you can see that paying off, for sure.”

In addition to the on-court chemistry, there’s the bond between players off the court as well. After watching the dynamic among the senior class the last couple of years, Christian said he knew he wanted this year to be different.

“Out of all my time at Poly, this is a special group,” he said. “We’re very close. Me, Budda, Marcel (Hayes), and Gabe (Cummings) we wanted to stress that this year we were all going to be close. So if we do something, it’s everyone. If someone’s going to the football game, we’re all going. If we get something to eat, we’re all going. Freshmen, seniors, everyone–we’re all connected that way, we’re always making fun of each other.” 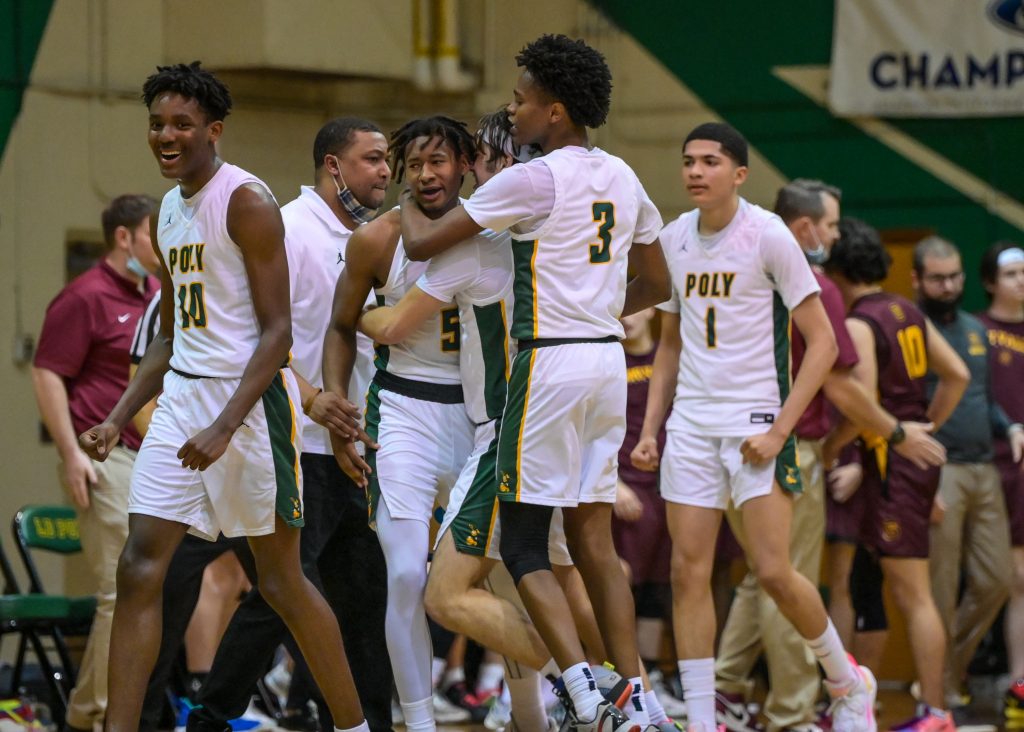 Watson said that the trust developed from those real friendships has made it easier for the team to hold each other accountable and communicate in big moments, including the Jackrabbits’ road wins in the quarterfinals and semifinals.

“It never comes off as personal because there’s a trust there,” he said. “We can be real with each other without worrying about it. That comes from respect.”

Watson has also been leading from the front this year. Depending on what game you stop by he could show up that night as his team’s best scorer, best rebounder, best passer, or best shot-blocker.

“He’s a great finisher and ball-handler, and a long defender,” said Diggs. “He’s a natural scorer, maybe more than his brother, and he’s come a long way on defense this year off ball and weak side. We challenged the whole team to get better defensively and they have.”

As for Watson’s off-the-court family, well, they’re always there too. Every Poly game has a large Watson cheering section with Christian’s parents, grandparents, uncle, and others. One of the reasons Peyton said he chose to sign with UCLA was to be able to still see his brother play, and he’s been at several Poly games as well.

“I feel blessed to have my grandparents at my games,” said Christian. “They had to miss a lot of games during COVID which was hard. My family are my biggest supporters. Seeing them there, having Peyton still be able to come, they’re who I play for.”

Christian also laughed at the idea of ever being jealous of his brother’s success, as some student sections have suggested.

“My brother has been my best friend my entire life,” he said. “Everything he does I’m extremely proud. And him for me.”

That being said, brothers are brothers, and there’s no doubt that Christian would love to get a win in the CIF-SS championship tonight–to win with his team, yes, but also to be able to one day gently tap a CIF ring on the table during a family dinner, too.

“Oh bragging about a CIF ring is one of those things I have to do,” he said. “We need that.”

High school track and field season begins in earnest in Long Beach this week, as the Moore League schedule opens on Wednesday with the always-anticipated dual meet between Long Beach Poly and Wilson, at the Bruins’ stadium. Perhaps no sport had more star athletes’ seasons cut short last year than track and field, making 2021’s […]

Head coach Michael Anderson’s Vikings team is off to a 3-4 start this season, including the first 0-2 start in Anderson’s successful nine-year tenure. “We’ve got six freshmen and they had to get their feet wet,” said Anderson. “It’s a long season.” Since that start, LBCC has shown their potential by going 3-1 in their […]

Long Beach State men’s basketball coach Dan Monson was quick to take blame for the 87-62 loss to UC Santa Barbara on Saturday at Walter Pyramid. “I apologize,” Monson said to open the post-game press conference. “We’re a fragile team right now. We broke for the first time this year (in the second half) and […]