Kim Sowder knows what it takes to be a successful softball program in the Big West Conference. The Long Beach State Athletics Hall of Fame player is in her 16th year as head coach and is thrilled that everything is getting back to normal.

“We’re trying to balance to keep (the players) healthy but get back to our schedule of weight room, practices and all that after COVID,” Sowder said. ”It’s their first full-time year for the sophomores and freshmen. They’re kind of feeling that at this point. We’re pushing pretty hard.”

Sowder has led LBSU to eight Big West titles and 25 NCAA Tournament appearances. Last year, she joined Pete Kolze of Pacific, Judi Garman of Cal State Fullerton, and her LBSU predecessor Pete Manarino as the only coaches to record 200 conference victories in the Big West. Sowder also is closing in on 500 career wins.

“It’s about rebounding fast,” Sowder said. “You can’t have a bad weekend all together and lose three. You’ve got to be able to bounce back quickly, which we did last year and we needed it every time. We couldn’t spare one more game in order to have that opportunity at the end.” 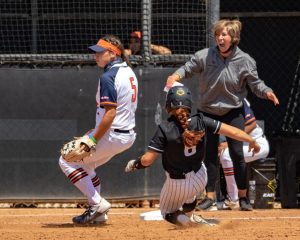 LBSU is coming off an improbable conference championship after sweeping rival Cal State Fullerton on the last weekend of the regular season, and is returning 17 letter-winners and six starters from that squad. Two returners will lead a versatile pitching staff.

Junior Samantha Fowler came on strong in the second half of last season and was top 10 in the Big West with a 3.28 ERA, 55 strikeouts and .242 opponents batting average. Sowder said Fowler has a calm presence in the circle and will use a lot of movement to keep her strikeout rate high.

Sophomore Shannon Haddad is also lined up to pitch a lot of innings after picking up valuable experience last season. She was 8-0 in 11 appearances, and her 64 strikeouts and 10 walks was a nationally ranked strikeout to walk ratio.

Senior Naomi Hernandez is in her fifth season at LBSU where she’s been named Big West Freshman Player of the Year, All-Big West three times and All-West Region twice. The right fielder is fourth all-time at LBSU with a .337 average, and ranks in the career Top 10 in runs scored, doubles and walks.

Senior Kyra Snyder and sophomore Sophia Fernandez lead a talented group of players who got limited opportunities last season and are ready to step into the starting lineup. Both of them can play multiple positions.

LBSU started its season last week by winning two of five games at the Puerto Vallarta College Challenge where sophomore Sara Olson and senior Justine Briones were named to the All-Tournament Team.

Two of the three losses were against No. 7 Washington and No. 8 Arkansas as LBSU starts its season with seven top 25 opponents in the first 14 games.

Sowder said she keeps her team going to elite tournaments every year in order to be better prepared for the NCAA Regionals.

“It’s certainly our goal to get deeper in the postseason after we kind of struggled last year,” Sowder added. “We need to find a way to be competitive consistently against top teams.”

The Beach is at the Arizona Hillenbrand Invitational this week and won’t play a home game until hosting the Louisville Slugger Invitational on March 10.

LBSU was picked to finish second in the Big West behind Fullerton by the conference coaches, and once again ends the regular season against Fullerton on May 13-14.

After a canceled 2020 season and months of waiting for answers, the two-time defending national champion Long Beach State men’s volleyball team will officially get a chance to defend its crown. The team released its schedule this week, which will be a 10-game Big West conference slate, with the Big West Tournament and potentially the […]

We’ve got a special bonus gallery from Lakewood softball taking on St. Paul, sent in by Nekane Erro. Support The562.org

Long Beach Poly softball contributed to this crazy year of Moore League softball by upsetting Wilson 1-0 on Thursday at El Dorado Park. “We’ve believed in our girls since day one, they just needed to believe in themselves,” Poly coach Elizabeth Sanches said. “Wilson is always a class act and played us tough but we […]