All of The562’s water polo coverage for the 2021-22 school year is sponsored by Aqualand. Visit AqualandOfTheFree.com to learn more.

Water polo was one of the first sports to return to competition back in the spring of 2021. There was no opportunity for postseason play following the shortened season, but as high school sports gradually return to normal this year, girls’ water polo teams will have the opportunity to compete for CIF championships once again.

The Moore League outlook again starts with Wilson, where head coach Barry O’Dea is excited about his young and super talented group. The Bruins will certainly miss departed seniors Ava Bishop, Sophia Dominguez, Ava Smith and Kaylee Stiger, who were all first team All-Moore League selections a season ago, but Wilson water polo has a tradition of reloading its talent and this year is no exception.

“Right now we’re excited,” said O’Dea about his team. “We had a really good offseason and we’ve played some really good games. Our speed is probably our biggest strength right now. This is one of the faster teams I’ve had since I’ve been at Wilson.”

The Bruins benefit from having three players who were part of Team USA’s Women’s Cadet National Team: junior Maya O’Dea, sophomore Jermonie Billingsly and freshman Katherine O’Dea. That places the trio among the best 16U girls’ water polo players in the country, and they had the opportunity to represent Team USA in Greece this past fall.

Maya O’Dea leads a strong junior class where she’s joined by returning All-League selections Gabrielle Gillot and Zoe Grover. Coach O’Dea singled out the improvement in Grover’s game since last season; her improved speed and strength should allow her to be even more of an impact player this season.

Senior Zoe Seaboch returns in goal to give the Bruins a veteran presence at that position, but Wilson will be relying on a ton of young talent this season.

Katherine O’Dea–Maya’s younger sister and also the coach’s daughter–will be one of three freshmen on the varsity roster, and should be a key contributor at both ends of the pool.

The Bruins will also depend on two sophomores to anchor the center position, with the super talented Billingsly starting down low and fellow 10th grader Emily Crabari serving as a more than capable backup at that spot. They’ll need to replace the production of Bishop, who was the Moore League Player of the Year in the spring, but Coach O’Dea has full confidence in his young centers.

“They’re going to have a big year for us,” he said of Billingsly and Crabari. “These girls have taken huge steps forward.”

O’Dea said he expects his team to be more lethal on the counterattack this year, which starts with their defensive aggression. Wilson opened its season with an impressive 18-8 win over San Clemente at the Belmont, pulling away in the second half and holding the Tritons scoreless in the final period.

The goal for the Bruins this season is to have similar success to the boys’ team, which ended up in a Division 1 semifinal at Woollett Aquatic Center in Irvine. Several members of the girls’ program attended that semifinal, and told their coach how badly they wanted to play there, too.

“I’m hoping that we can make a nice run in the playoffs and get to play under the lights at Woollett,” said Barry O’Dea. “We want to be at Woollett at the end of the season, that’s our big goal.”

Expectations are also high for Millikan girls’ water polo this season because the Rams have the experience and top end talent on the roster.

“We’re definitely stepping up to the level of play that we should be at now,” Millikan coach Jose Guzman said. “We’re not a big team but we’re very quick on the transitions and drives. This year our counter attack game is going to be huge in terms of creating scoring opportunities.” 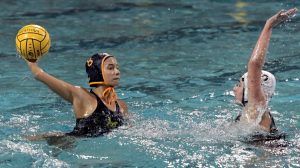 Junior Jennine Osorio (pictured) is one of the best players in the Moore League because of her all-around skill. She and Wilson’s Maya O’Dea were the only sophomores to make All-League first team last season. Osorio is fundamentally sound in the center at both ends of the pool, and is like a coach in the pool for Guzman.

“She has a lot more experience than other girls so she really helps coach,” junior Faye Garcia said. “She’s just a really good all-around player.”

Guzman said that Garcia, Osorio and Taylor Alexander are all good leaders who have grown up together in the program.

“I think that we’re all pretty positive and we’ve gotten a lot closer this year just as friends,” Garcia said. “We all have each other’s back, even outside of water polo. That fact that we’re closer shows with how we play.”

Defensively, Guzman is going to rely heavily on Brittany Mendoza and sisters Avery and Larson Jenson. Larson is a sophomore, but Guzman said she plays like a senior, and Mendoza is a natural athlete who also plays volleyball and runs cross country.

Guzman and Garcia both said they think the game against Wilson (Jan. 26) will be closer than it has been in the past because the Rams have the speed to keep pace with the Bruins on counter attacks.

“As I’ve been coaching, it seems like that’s what I want,” he said. “It wasn’t when I started, I came to a boys practice to help with a scrimmage, and then Ish (Pluton) asked me to be on his coaching staff. And then Bill (Brightenburg) asked me to help with the girls’ team. And then Kalani (Caldwell) asked me to be on her staff with swimming. I found myself making sure I have the availability to coach because I love being here. I had never really thought about it before coming back but I love working with the kids and being back on deck.” 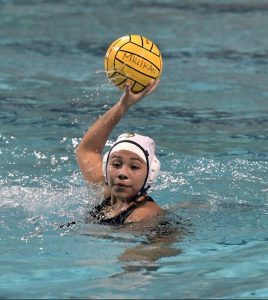 “It’s going to be a really interesting group to coach tactically,” said Rockenbach.

The roster also features some club swimmers who’ve taken to water polo including junior Ariel Cordova. Lizzy Jung and sophomore standout Anna Mor are some of the other key contributors.

The Jackrabbits feature a mixture of players who’ve been swimming competitively from a very young age, and athletes who have learned to swim for the first time within the Poly aquatics program, who are now varsity contributors.

“I relate to these kids because I was one of those who was totally new to the sport and to swimming when I got here as a student,” said Rockenbach.

After a quarterfinal run with the boys’ water polo program, Lakewood head coach Charles Wright is hoping for similar success with the girls’ team this season.

“We’re hoping to make it to the CIF playoffs,” said Wright. “We have a really strong group of seniors, as well as new players, that we think can really help us get there.”

The Lancers will benefit from having a senior goalie patrolling the cage as Danielle Sgontz returns. She was a first-team All-Moore League selection last season and will be a key leader for the Lancers while running the defense. Senior Gracie Isaacson will also be a key member of that Lakewood defense as she takes on the utility role.

Senior Carah Beaird is back at the center position and is another first team all-league honoree from last season. She’ll be a primary goal scorer for the Lancers down low while senior Evelyn Waffle will be key out on the perimeter and junior Brooke Baze is a promising attacker thanks to her speed in the water.

At Cabrillo, assistant turned head coach Hailey Pedersen is looking to build off a solid spring season for the Jags, who picked up their first ever Moore League win in their home pool This year’s Jags will be led by a pair of standout seniors this season, Jenny Topete and Maritza Uribe, who each have multiple years of varsity experience. Topete will play at the point for Cabrillo while Uribe will provide speed for their counterattack.

“Our main goal for this season is to continue the momentum we started building last season,” Pedersen said. “We were able to work well together as a team, and we want to keep that up this year. I am confident because I got to know the girls last season as the assistant coach, so that has helped ease the transition.”

Jordan is also going through a coaching change as Phil Geiger has taken over the program. Kelsey Schafer coached the team during the spring and will now be an assistant coach.

Teams will continue non-league play for the rest of the calendar year in preparation for the Moore League varsity showcase on Jan. 5, 2022, which will kick off league play with a tripleheader of games at the Cabrillo pool.

Long Beach Poly found itself in an unfortunately familiar situation last week, when a positive COVID-19 test in the Cabrillo program canceled their game with the Jaguars, scheduled for this Friday. Poly had games canceled in the Spring due to positive tests, and their season opener against Leuzinger was delayed because of positive tests in […]

Lakewood High is conducting a search for a head varsity football coach, and the job of rebuilding the program also includes an on-campus teaching position in Social Sciences. Mike Christensen stepped down earlier this week. “Our ideal candidate will be involved in the resurgence of a once proud program ready to rise,” Lakewood athletics director […]

We’ve got photos from the Bruins’ big win over Jordan thanks to photographer Joe Kling.