Jeremie McGurn has never been able to settle down, but everywhere he’s been the Jordan senior has left his mark.

McGurn went to four middle schools, two high schools and even moved to Georgia for a year, but he’s found a familiar place to flourish in J-Town.

“I came back to Jordan really because they showed me the most love,” McGurn said. “I feel like I’m home when I’m at Jordan.”

That comfort has allowed McGurn to step up as a leader for this Jordan team that is making its first CIF Southern Section championship appearance tonight. The 6’3” 236-pound senior is a terror on defense at linebacker, and has made some of the biggest catches of the Panthers postseason at tight end.

“His leadership has changed the whole program,” Jordan coach Tim Wedlow said. “He’s the type of guy who speaks out and everybody listens to him. That’s why everyone has stepped it up because when he says to step up everybody listens.”

“I just know that I’m a leader and everything that I do reflects on the team so when I make a good play the whole thing starts to get going,” McGurn said. “I like that.”

McGurn showed off his natural athletic ability in Jordan’s semifinal win over Twentynine Palms last week. He made an incredible one-handed catch to convert an important two-point conversion, and then caught the go-ahead touchdown in the final minutes. McGurn, who leads his team with over 80 tackles this season, also has multiple sacks in all three postseason wins.

“This team has become my family,” McGurn said after the semifinal victory. “We can start a dynasty at Jordan off of this year.”

McGurn was born and raised in Long Beach as the youngest of four brothers. He excelled on the basketball court, but slowly fell in love with football as he got bigger and better on the field. He played with North Long Beach pop warner alongside teammate Damian Henderson and other future Panthers.

“We were good when we were young because we just ran around people,” McGurn said.

McGurn’s life got turned upside down when he was in middle school and his parents separated. He moved to Georgia with his dad, but his dad’s drug problem and new girlfriend’s living situation ruined the relationship he had with his sons.

“I was home by myself a lot,” McGurn said of his time in Georgia. “It was really tough because I wanted to stay in Long Beach and I didn’t want a new start.”

McGurn’s older brother Daymaar knew what he needed to do when word got back to Long Beach that his little brother was struggling.

“When you’re growing up and you see situations like that it kind of mentally tears kids apart, but he’s strong,” Daymaar said of Jeremie. “For me being the older brother who experienced the same things with the same person, I knew it was time for him to come home… Despite what was going on at home Jeremie was always a good kid.”

Daymaar, who graduated from Jordan in 2010, and their brother Ali were living in a downtown Long Beach apartment at the time. That’s where Jeremie moved into when he finally convinced his dad to drive him back to California.

“I had to (become a father figure) for him and if you ask everybody at the school they think I’m his parent,” Daymaar said. “They think I’m his dad. I’ll take that though. That’s one of my responsibilities and I’d never let him go down the wrong path.”

“That’s when I started to figure out everything,” McGurn said of living with his brothers. “It was fun to live with them. My brothers were teaching me everything because my dad didn’t teach me anything.” 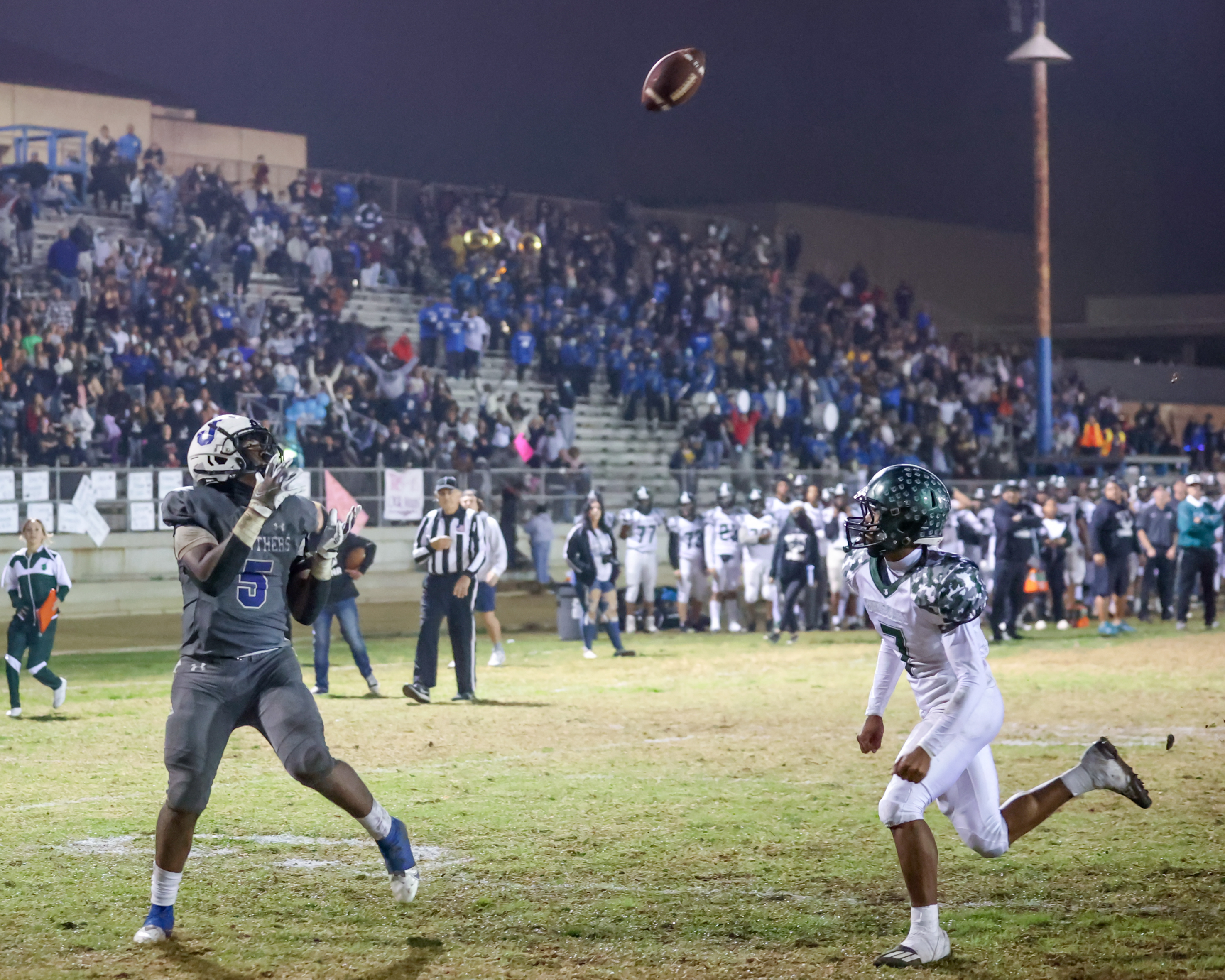 McGurn had gone through a growth spurt while he was in Georgia, and his newfound size limited him on the basketball court while making him more capable on the football field. When he arrived at Jordan as a freshman, McGurn immediately became a Varsity starter.

“(Coach Tim Wedlow) really trusted me and I realized I could hang,” McGurn said. “I felt like I was home. It felt like where I needed to be.”

That feeling didn’t last long. McGurn had moved back in with his mom when he started high school, and she thought it was best for his future for him to transfer to Capistrano Valley Christian High. McGurn played basketball and football for the Eagles while living with a host family in Orange County.

However, the commute , COVID-19 and other factors made McGurn reevaluate his goals. On the top of the list was concentrating solely on football, so he wanted to get back to Long Beach to attend a bigger school while chasing his dream of earning a college scholarship. He’s already been contacted by Nevada, Montana State and other schools.

“Honestly, tears come to my eyes when I see him play because he’s better than all of us,” Daymaar said. “He took something from all of his brothers. I see a part of each of us in him.”

McGurn has done a little bit of everything for the Panther this season. He even stepped in to play running back in the season opening overtime win over Kennedy.

“That Kennedy game set the tone for us,” Wedlow said. “It showed us we could come back and win the game.”

READ MORE about the journey the Jordan team has taken to the championship game.

GET TO KNOW JEREMIE MCGURN

Question: Your brother said you’ve always done well in school, what is your favorite subject?
Answer: I had a 3.8 GPA last year. I like math and history. I could be a history teacher.

Q: What video games do you play the most?
A: Madden, Call of Duty and NBA 2K. The 49ers are my main team on Madden.

Q: Who is your favorite player?
A: Fred Morgan. I feel like he brings a lot of energy to the game, and he’s a leader.

Q: Do you watch more movies or TV?
A: I like movies. I like that Nick Cannon movie Love Don’t Cost A Thing.

Q: What is your favorite sport besides football and basketball?
A: Soccer. If I didn’t play basketball and football I would be a good goalie. I like watching the World Cup.

Q: Do you have any other hobbies?
A: I like going fishing with my brother. It’s about patience and then the excitement when you catch a fish. It’s fun. It’s nice to do something else that’s not football and take the stress off. It’s calming.

Despite losing to Bellflower 35-13 in the first game of the year, Cabrillo got some momentum with two late scores, and the Jaguars are trying to ride that wave at Summit tonight. The Summit SkyHawks lost 34-0 at Etiwanda last week. They won 22 of 25 games from 2015-16. VIDEO: Cabrillo vs. Bellflower Football

Congratulations to our Athletes of the Week and thanks to Naples Rib Company for their support. HIGH SCHOOL Tacario Davis, Millikan Football Millikan senior Tacario Davis is one of the top players in the city this year, and the senior Arizona commit showed it in a 28-21 win over Wilson last week. Davis had three […]