All of The562’s cross country coverage for the 2021-22 school year is sponsored by Bryson. Visit BrysonFinancial.com to learn more.

There were ideal running conditions at Mt. San Antonio College on Saturday morning for the 2021 CIF-SS Cross Country Championships, and Long Beach’s top runners had the results to match. All season it’s been Poly’s Camille Lindsay and Millikan’s Jason Parra dominating the Moore League, and both runners punched their ticket to the CIF State meet with Top 10 finishes in the CIF Division 1 finals.

Parra took part in a memorable Division 1 boys’ race, which saw Newbury Park put on a performance for the record books. The Panthers swept the first six finishers, which represents the best finish in CIF-SS history–and allowed them to post a “Perfect 15” team score.

The only runner to hang in that elite group was Parra, who went out fast and stayed with the Newbury Park runners through the first two miles of the race. He would fall back only slightly, finishing eighth with a time of 15:05.6.

“I knew they were gonna get out fast, because everyone doesn’t like to push that pace and they’re one of the only ones who do like to push it,” said Parra of the Newbury Park team. “So I just stuck with them. I was behind four of them and I just pushed up right to the front. I got in front for a little bit and I don’t think they liked that, so they pushed right back and the race kind of started a little more.”

It wasn’t until after the two-mile mark that the Panthers were able to get some separation from Parra, and he held his own down the stretch to finish as the top individual qualifier. He was also the only sophomore to qualify as an individual, finishing second overall in his class.

“Once we got to the end, I already knew I was gonna be dead,” Parra admitted. “I wanted it to come down to a pure guts race, and just make them work for as much as I could.”

Lindsay, meanwhile, finished 10th in the Division 1 girls’ race to punch her ticket to the CIF State meet. The junior will be making her first trip to State thanks to her time of 18:11.4 on Saturday.

Her race followed a different formula, as she waited back in the early portion of the race before moving up the leaderboard late. Lindsay was able to pass a runner heading to the finish line in order to crack the Top 10.

“I was so happy,” said Lindsay after qualifying. “You know, this is different than anything that I’ve ever done before and to be able to compete against these girls and read a smart race like I did, I’m just so happy.”

Lindsay hasn’t been at 100 percent since suffering a severe allergic reaction prior to Moore League Finals. That left her on the shelf for a few weeks recovering, but she’s been able to get back into top form at the right time.

“I was feeling kind of down because it felt like that two-and-a-half weeks off had set me back like two months,” Lindsay admitted. “At CIF prelims I wasn’t feeling good, but that could have been from the heat. But then today, I just ran, and it felt like the most comfortable I’ve run in a while. It felt like I was back where I needed to be and, I mean, the time and the performance showed that.”

“I’ve checked back in our history books and that’s the fastest a girl from Poly has ever run at Mt. SAC,” Ford said. “She really did something amazing today. For my coaching career, I haven’t seen someone race like that–that smart, well controlled and composed … Right now, she’s in an undefeatable mindset. She’s putting her mind to it and she’s doing it, so it’s amazing what she’s doing.”

Neither of the Long Beach Poly teams were able to finish in the Top 7, which is the benchmark to reach the state meet. The boys’ team came closest with a ninth-place finish.

“We knew it was gonna be a real tight, tight bunch at the end,” said Ford of the boys’ team results. “And that’s probably some of the best spread we’ve had as a team all season. So really, performance-wise, they went out in the fastest race in Southern Section history with some really amazing teams and we just showed that we belong to be one of those teams.”

Parra and Lindsay will head to Woodward Park in Fresno for the CIF State meet next Saturday. 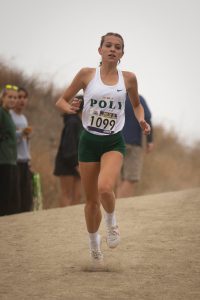 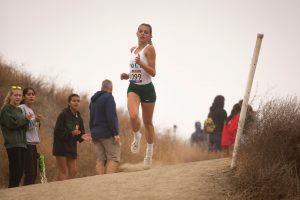 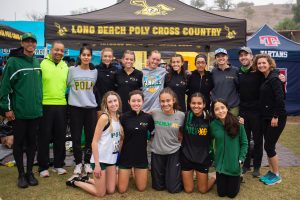 We’ve got some great shots of the Rams’ 6-0 victory.

The Long Beach Poly football team adjusted on the fly this week, but there was never any doubt the Jackrabbits would land safely in a 42-0 win on Thursday night at Jordan in Moore League action. Poly found out late last week that this game would be moved to Thursday because of the ongoing referee […]