After decades of planning and fundraising, St. Anthony High School officially broke ground Thursday on the new athletic facility being built at Clark Field where the Saints have practiced and played multiple sports since 1946.

“This project started and stopped for the last decade or longer,” St. Anthony Vice Principal and alum Chris McGuiness said. “Because of so much hard work and generosity from so many people, we’re finally able to see today where we can actually put a shovel in the ground. It’s more than just a drawing, it’s coming to life and it’s real now. To have so many alumni and people out here is fantastic.”

The construction of the new all-turf athletic field, track, grandstand and locker rooms has been scheduled to start because of a $6 million gift from Shea Family Charities and gifts received from alumni, current school families and the community. Lloyd Sports & Engineering and Slater Builders will be the firms in charge.

“I’m a graduate of the Class of 1991 and I played on this field, and ran track on this field… So to get a new field is a sigh of relief because it’s been a rumor that’s been going on since I graduated,” St. Anthony alum and Athletic Director Chris Morrison said. 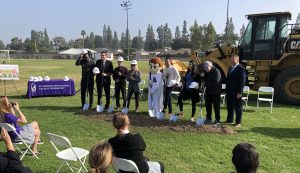 New St. Anthony President Michael Brennan introduced dignitaries such as Long Beach Mayor Robert Garcia and Long Beach 5th District Councilwoman Stacy Mungo, but made a special introduction for former school president Gina Rushing Maguire. She was Class of 1967 and served as president from 2001 until earlier this year. She told the story about how the soybean farm at the corner of Clark Ave. and Spring St. was purchased by the school for $10 in 1945.

“Now 75 years later we’re turning a new page in the story of this old field,” Maguire said. “This is really a day that we dreamed and fought for. This day is an affirmation of our school’s continued place in Long Beach as a leader in Catholic education.”

Mayor Garcia got his first job working for Maguire after graduating from Cal State Long Beach.

“I’m really happy to be here and I want to thank the entire St. Anthony family for this incredible day,” Garcia said. “A lot of the leadership lessons I learned were from this incredible combination of Catholic leadership perspective of helping people, being kind, of treating people who are different with the same level of love and respect, and I think that binds us together as people… those values are exemplified by the St. Anthony education.”

Clark Field always had an old-school feel to it with its natural surface and original dirt track, but nostalgia wasn’t a big draw for local athletes and their families choosing Long Beach schools.

“I think we lost students because of our athletic facilities and there’s a lot of schools around Long Beach that have better facilities than ours,” Morrison said. “This kind of evens the playing field.”

The original plans for the new facility detailed a complete demolition and rebuild of everything from the football field to the baseball field. But after years of falling short of that massive fundraising goal, the administration decided to split the construction into two phases. What has begun is Phase 1 that will include a new turf football/soccer field, six-lane regulation track, 1,200 seat bleachers and locker rooms.

“The original version is beautiful but it was more than we needed right now,” McGuiness said. “We want to look nice and be modern but we had to take out the wants and just stick to the needs.” 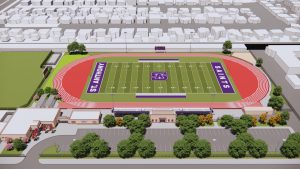 Phase 2, which St. Anthony is actively fundraising for, will include new baseball and softball fields. Director of Advancement Gina L. Mascaro was instrumental in getting this project started.

“This new home for the Saints will not only serve our now and future Saints, and the alumni, but our entire neighborhood and the greater Long Beach community,” Maguire added. “I look forward to the grand opening in 2022. It will happen.”

The crowd at the groundbreaking also included current St. Anthony football players and historic alums B.I. Mais and Doc McBride. Both were at the first football game hosted at Clark Field in 1946 with Mais (pictured below) leading the Saints to victory. 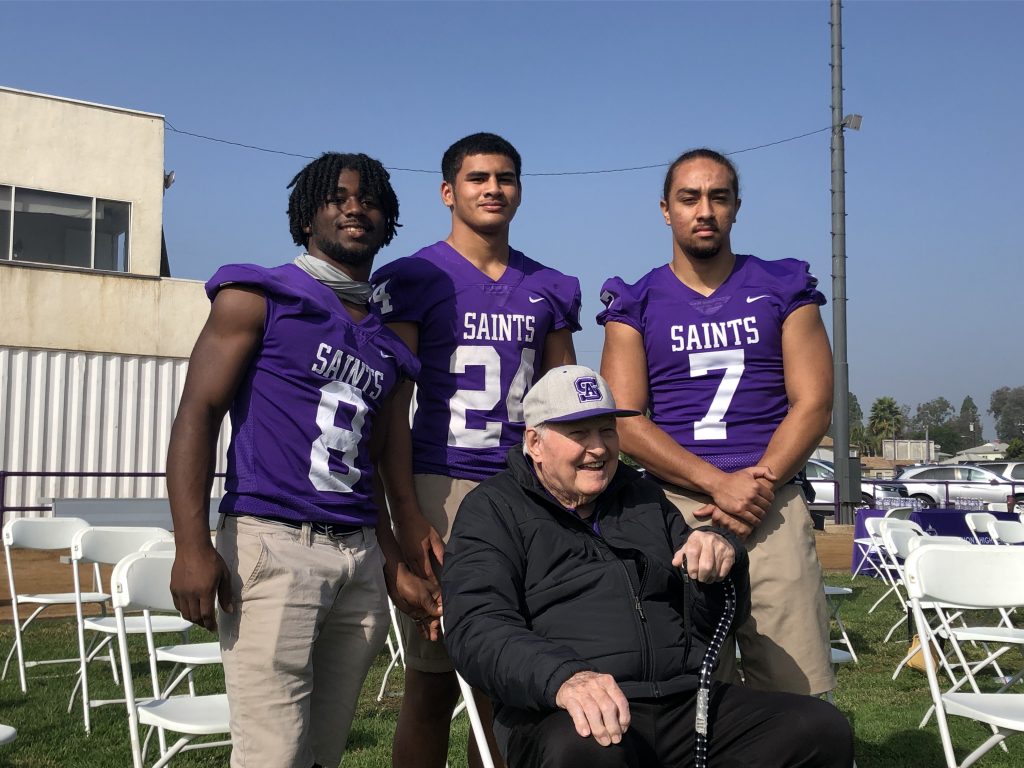 SAHS – The Building Our Future Campaign

Long Beach Poly sisters Allanah and Aniah Cutler were both named to the All-CIF girls’ soccer list, as released by the CIF Southern Section on Monday afternoon. Here’s a look at all the honorees: 2018-19 GIRLS ALL CIF SOCCER

We’ve got the highlights from the Bruins’ season-opening win over Millikan. High School Soccer: Wilson vs. Millikan The Bruins defeated the Rams on opening day to start what promises to be an exciting Moore League season.