The sweet is never quite as sweet without the sour.

Lena Silano knows that lesson well after transforming herself from a frustrated underclassman on the bench to a historic goal scorer for Long Beach State women’s soccer.

“People forget that you’re in control of your own destiny,” Silano said. “I took control. I’m grateful for the adversity because I wouldn’t have this grit and motivation.”

Silano has scored 11 of the 18 total goals for LBSU this season and leads the Big West Conference in almost every offensive category. The Beach is hoping for more magic from Silano this week while hosting Cal Poly tonight at 6 p.m. and UC Santa Barbara on Sunday at 2 p.m. to finish the regular season. LBSU (9-5-2, 6-1-1) is currently second place being Cal Poly and in front of UC Santa Barbara.

“She’s always had the ability, but everybody matures at their own pace,” LBSU coach Mauricio Ingrassia said of Silano. “She sees the goal really well. She knows what she’s doing. She’s extremely driven and she’s starting to lead as well which is the fun part.”

This impressive junior season has also seen Silano etch her name in the LBSU history books. Her six game-winning goals are tied for second most in a single season, she’s tied for fifth most in goals scored, seventh in most shots with 64 and now she’s tied for tenth in total points.

It would’ve been impossible to predict this season while she was a struggling underclassman, but the COVID-19 shutdowns actually helped Silano.

“I’m grateful for COVID because I got the time to really focus on myself and where I want to be,” Silano said. “My mentality completely changed. I’m just striving to be the best version of me, both as a player and as a person.”

“What you see is all her,” Ingrassia added. “She’s someone who reinvented herself over COVID.”

Silano was outgoing and active while growing up in Agoura Hills. She took ballet because that’s what young girls do, and she played hockey before her older brother did, but her true love was always soccer.

“I’d rather practice soccer than play other sports,” Silano said. “I love it. I love scoring and being part of the team.”

Joining a club team while in high school showed Silano that her skills as a forward could get her a college scholarship.

“I’ve always been one of the top players on teams, but I had to work to get there,” Silano said. “It came naturally, but once it got more competitive I had to work. I love the journey.”

“She’s an incredible kid and she just had something,” Ingrassia said of recruiting Silano. “She was powerful and could shoot right and left. It just took her awhile to prove herself in our program.”

“I’m super grateful for the potential (Ingrassia) saw in me,” Silano added. “I just didn’t realize how mental the game was my freshman year. I thought I was ready but I was going through a lot personally. I wasn’t ready and that was difficult for me to see.”

Silano only appeared in six games as a freshman, and only made two starts as a sophomore before COVID-19 shut down her junior season. Instead of sulking, Silano dedicated herself to improving on and off the field. She went through a grueling 10-week strength training program, started reading self-improvement books like Tim Grover’s Relentless and listened to podcasts like The Ego Is Your Enemy.

“I love working hard,” Silano said. “It’s mental and about confidence. I wasn’t shooting or taking players on and passing the way I am now. Now I trust myself and my abilities. I’ve trained my body and I’ve prepared for these moments so it’s all instinct now. Hard work does pay off.”

Silano impressed Ingrassia and the rest of the LBSU coaches with her improved strength and tenacity when the team was able to practice again after the COVID-19 shutdowns, but the goals didn’t come as quickly. Ingrassia even let her take the first penalty kick of the spring season to get her back on track, but she missed it.

“When we checked the stats after the first few spring games we saw that Lena was creating four times as many chances,” Ingrassia said. “All of a sudden in (the regular season) those shots that were hitting the post started going in. The key was that she was creating the chances.” 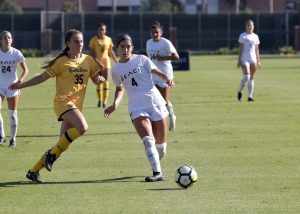 Silano’s also been clutch and those six game-winning goals is tied for the most in the nation this season. In addition to the four Big West Player of the Week honors she’s received this year, Silano has also earned a Top Drawer Team of the Week selection and two Honorable Mentions.

“I’ve always had glimpses of success and I’ve always chased after that,” Silano said. “I’m passionate about soccer and what it’s brought to me and how it’s always been there for me no matter what’s gone down in life. It’s always been a constant.”

That dedication from Silano and the experienced senior class has changed LBSU women’s soccer for the better and has the Beach battling for the Big West title once again.

“They’re all great kids and that’s contagious,” Ingrassia said. “The senior class has done wonders for our culture. They know how they want the program to be. They’ve created an incredible culture of support and inclusiveness and I think that’s what they’re feeling.”

Silano agrees that the culture around the team is a huge part of her and LBSU’s success.

“The chemistry is great and we do genuinely care about each other,” Silano said. “When we came back everyone was grateful to be here. We tried to have a more positive atmosphere and help people grow. We thrive off of positivity.”

No matter what happens over the next few weeks and beyond, Silano doesn’t want her soccer journey to be finished.

“I know it’s not over after this,” she said. “I love it so much and I’ve worked too hard for it to be over.”

Long Beach Poly sisters Allanah and Aniah Cutler were both named to the All-CIF girls’ soccer list, as released by the CIF Southern Section on Monday afternoon. Here’s a look at all the honorees: 2018-19 GIRLS ALL CIF SOCCER

Long Beach State women’s basketball had it’s five-game winning streak snapped in the first round of the Big West Conference Tournament on Tuesday at CSU Fullerton in a 79-66 loss to UC Riverside. The Highlanders (10-21) play No. 3 seed UC Irvine on Wednesday at Honda Center. LBSU (8-23, 6-10) was led by senior Cecily Wilson’s […]

The562’s coverage of Long Beach State Volleyball is sponsored by Naples Island Car Wash. Visit NaplesIslandCarWash.comto learn more. At tonight’s American Volleyball Coaches Association banquet, Long Beach State freshman outside hitter Alex Nikolov made history as he was named the National Player of the Year. Nikolov, also the National Freshman of the Year and the Big […]