One couldn’t begrudge Damian Henderson if he were mad at the world.

“I worry about where I’m going to sleep at night or hoping there’s something for me to eat at home and making sure my family is right,” Henderson said.

However, the Jordan High football and basketball star hasn’t let his family issues change his demeanor.

“The young man has had it real hard but he’s a humble, reserved and quiet leader and all of the kids gravitate towards him,” Jordan basketball coach Chris Francis said. “Whatever he’s doing, that’s what everyone else is doing.”

What Henderson is doing right now is leading the Jordan football team by example. The Panthers can get themselves into the playoff hunt with a win at Wilson tonight.

“He’s just a kid who’s trying to get his life together and do the right thing,” Jordan football coach Tim Wedlow said. “He’s not an angry person. He gets along with everybody and everybody on campus loves him. Every time I see him there’s a crowd around him. He’s like a magnet to people. Everyone respects him.”

“It motivated me to keep pushing and it was something I had to really take in like, ‘Damn, I really got to learn from this’,” Henderson said of his family issues. “It was always iffy with the family. It was hard for us to find places to stay. Growing up without a father figure I had to learn how to be a man and all that stuff. I wanted to make things better.”

Henderson was born and raised in and around the North Long Beach area. He was always moving but stayed active while growing up, although he didn’t get involved in organized sports until he lost his older brother, Darnell.

“I was in the third grade and I remember waking up and they said (Darnell) was at a party and something happened and he got shot in the head,” Henderson recalled. “What really made me want to play was when my brother passed because he always played sports. When he passed it hurt, and I felt like I had to do what he did.”

Henderson added that he feels like he’s keeping his brother’s memory alive when he’s playing sports, and it just so happens he’s also a very talented athlete.

“He’s a hell of a talent,” Francis said of his shooting guard.

Playing Pop Warner football with the North Long Beach Panthers gave Henderson the opportunity to use his elite speed, and that’s still the case for the junior who plays running back and defensive back for Jordan this season. He helped the Panthers win a dramatic season opener with a rushing touchdown, a kickoff return for a touchdown, a sack, a fumble recovery and an interception in the overtime victory.

Henderson also leads the team in touchdowns but you wouldn’t guess that by seeing him politely interact with his teammates.

“He leads with positivity,” Wedlow said. “He wants to win.”

“On the field I kind of keep to myself,” Henderson said. “A lot of people don’t like to be told stuff so I don’t like making things bigger than everything so I just keep it to myself and lead by example.”

Henderson thought he would only play basketball in high school after leaving Pop Warner to play travel basketball with the Long Beach Sixers, but once he saw friends like Jeremie McGurn having fun on the football field he wanted to make a return. Henderson added that having friends like McGurn has helped him leave old friends behind who were more interested in, “being on the streets.”

“That’s my guy,” Henderson said of McGurn, who is a star linebacker for the Panthers. “He never just wants to chill, he wants to work out and stuff like that. We’ve known each other since we were kids.”

Henderson has also received incredible support from the coaches at Jordan. One coach, who wished to remain nameless in this article, said they buy him groceries once a month.

“If my coach bought me something to eat I wouldn’t say he’s buying it for me because I want to make sure all of my family eats first,” Henderson said. “I try to put them before myself.”

Wedlow said his coaching staff makes sure Henderson and other players in similar situations have what they need for school. One assistant coach even did Henderson’s laundry for him.

“It’s from our heart,” Wedlow said. “We know a lot of these kids don’t eat a lot so if they want a peanut butter and jelly sandwich they can come to my office and I’ll make them a sandwich. We just take care of them and try to make sure they stay healthy.”

As a freshman, Henderson felt like his life was headed in the right direction on campus, but then COVID-19 shut everything down and created new challenges for him.

“I don’t even know how I did it,” Henderson said. “I struggled in school. Some days I would be at my sister’s house and she had internet, and some days I had to go to my aunties house and she didn’t have internet so it was hard for me to be on Zoom.”

Henderson said his dream is to attend college where he wants to continue his athletic career, but first he wants to get his school more wins.

“I feel more comfortable now,” Henderson said. “Whatever is happening (in my life) I just take it out on the field.” 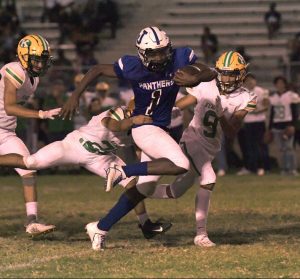 GET TO KNOW DAMIAN HENDERSON

Question: What’s your favorite subject in school?
Answer: My favorite class right now is English, we’ve been writing about what our names mean. Mine means tame and not dangerous. I’m dangerous myself so I wouldn’t say not dangerous.

Q: Do you watch a lot of football?
A: I watch the Cowboys a lot because the whole family does. I watch positions and stuff I want to do and just watch how they do it. Like Julio Jones— how he’s aggressive, he’s different from a lot of receivers.

Q: Do you watch basketball the same way?
A: I watch all positions for basketball because you have to learn how to do a lot of stuff. Football is more of a specific skill set and basketball is all around.

Q: What is your favorite TV show?
A: Rick & Morty. Morty is my favorite character.

Q: Do you have a favorite book?
A: When I was little I really liked this LeBron James book, about how he grew up. It was talking about how he and his mom were poor and he had to go through a neighborhood full of gang affiliations, like me.

Q: What do you want to do when you grow up?
A: I haven’t thought about it a lot, but maybe construction or owning my own business like an apparel company.

The562’s Athletes of the Week is sponsored by the Long Beach Century Club. Congratulations to our Athletes of the Week and thanks to the Long Beach Century Club and Naples Rib Company for their support. HIGH SCHOOL Jordan Anderson, Millikan Football Millikan junior Jordan Anderson had a great game for the Rams in their playoff […]

We’re giving you a rundown of Long Beach basketball, soccer, water polo and wrestling as a new season starts with new postseason scenarios.