Like so many people around the world, Wilson senior wide receiver Josh Scott lost a loved one to the COVID-19 pandemic. His father, Joseph, passed away in January, just a month after going to the hospital.

Josh and his family only got to visit Joseph once, the day before he died, and they didn’t even get to speak to him because he was sedated.

“It was rough,” Scott said. “That whole day was just rough, seeing him like that not being able to talk.”

Obviously, Scott took some time off school to be around his family and support his mom, Marcia.

“We just kept talking to him,” Marcia said. “He talked it out and never really melted down. He never did that. Family was around constantly and we have a huge family so that kept him going.”

“My mom is very strong, but I take care of her through all of this and every day,” Scott said. “Whatever she needs me to do, I’m just there to be supportive.”

When Scott was ready to get back in the classroom where he excels, he had one other thing on his mind. That was returning to the football field, where he’s always felt closest with his dad, who played at USC.

“My husband instilled football in the kids at an early age,” Marcia said. “Even though Josh was tall and good at basketball, his passion is football. He just loves the sport. He has little cousins in Pop Warner and he’s teaching them moves when they come over.” 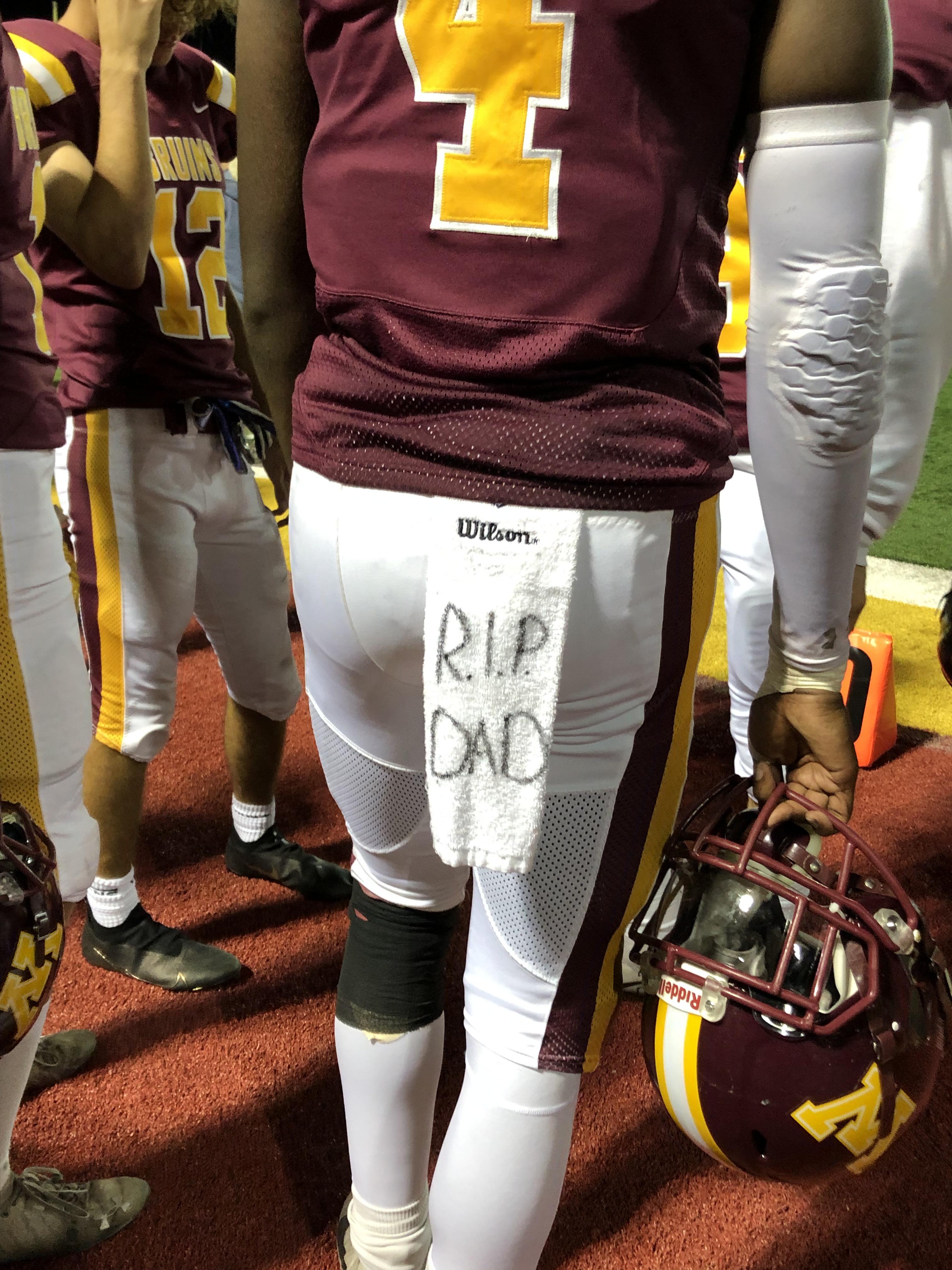 Scott stands at 6’6” and 200 pounds, but is a quiet kid who has only shared his struggles with a few teammates and close friends like Julian Garcia, Cordae Jones and Xavier McLaurin. However, it didn’t take new head coach Scott Meyer long to see Scott’s strength once he found out what happened in January.

“He’s probably as good a kid as I’ve ever had the opportunity to coach,” Meyer said. “He’s just an amazing, hard working kid. He has a real quiet demeanor but a great personality.”

“He was ready to go (back to football) and when Josh is ready to do something, he’s going to do it and he’s honest,” Marcia said. “I wasn’t worried that going back would be too soon (concerning COVID and his health). The social distancing and two tickets per player in the stands helped, and he was fully vaccinated at that point.”

Football has now turned into a sanctuary for Scott, but the Bruins have been struggling through a 1-4 season. Scott has used the lessons he’s learned recently to try and get his team back on track.

“I’m trying to keep everybody’s heads up and positive and working hard,” Scott said. “It’s that we’re not playing as a team. We’ve been playing as individuals instead of together. Once we start playing together, we’ll start winning games.”

Scott grew up in Long Beach, where he started playing flag football in kindergarten. He went on to play Pop Warner football with the Long Beach 49ers in fifth grade. His dad only coached one of his teams and was never an overbearing football parent.

“He was a huge part of everything in my life,” Scott said of his dad. “He never went into detail (about his playing days) but I always heard from his friends, ‘Your dad was a really great player.’ I liked that he let me
do my own thing and learn from myself while also taking tips from him.”

“He was just an awesome dad,” Marcia said. “He was always with them. He’s forever present in his boy’s life. And if you didn’t have a dad, he would definitely be your dad.” 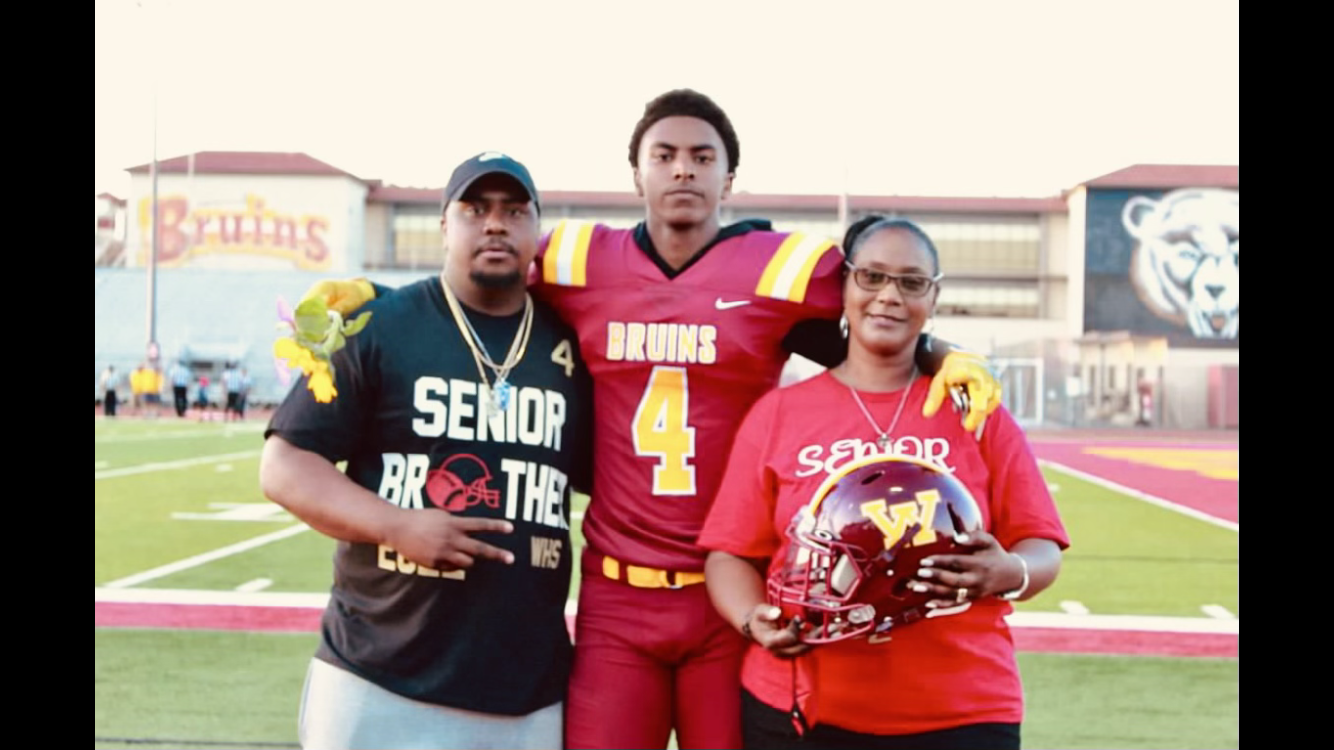 Marcia added that the Senior Night ceremony at Wilson earlier this month was a very emotional moment for her, Josh and his older brother Jeremiah, who also played football at Wilson.

“I just wish his dad could see this and be a part of this to make our family complete,” Marcia said. “But I was happy and proud of Josh. I told him his dad would be really, really proud of him right now.”

Joseph Scott also left his mark on the Wilson football program by being an integral part of the booster club. He helped the school get sponsors and hang the banners on the corner of Seventh Street and Ximeno Avenue.

“They all wanted to show support to Josh and wanted Josh to know how much they respected his dad for all he did for the football department,” Marcia said.

Scott said his goals are to attend a university where he can possibly play football. He’s hoping that playing in the Tiki Bowl in Florida this December will get him some looks from college coaches. Scott also wants to study law in college like his dad.

“It’s very frustrating,” Scott said of the recent fight for reformed social justice in America. “Watching it pretty much every day, there’s always something new. I’m trying to make a difference. I want to leave an impact by promoting change.”

“I never had a problem with Josh in school, he’s always been pretty much a straight A student,” Marcia said. “He excelled and was doing spelling bees at 3 and 4. He gave a long speech at his kindergarten graduation. He just did his work and was a good friend to his classmates.”

Scott also said he enjoys reading about historical figures. Martin Luther King Jr. is one of his favorites, and he found a quote this year that has helped him though such a challenging time. It reads, “Only in the darkness can you see the stars.”

“He definitely matured,” Marcia said of his son’s growth this year. “He speaks his mind more. He really seems strong. He really does. It’s real. It’s not like he’s trying to do it for mom.” 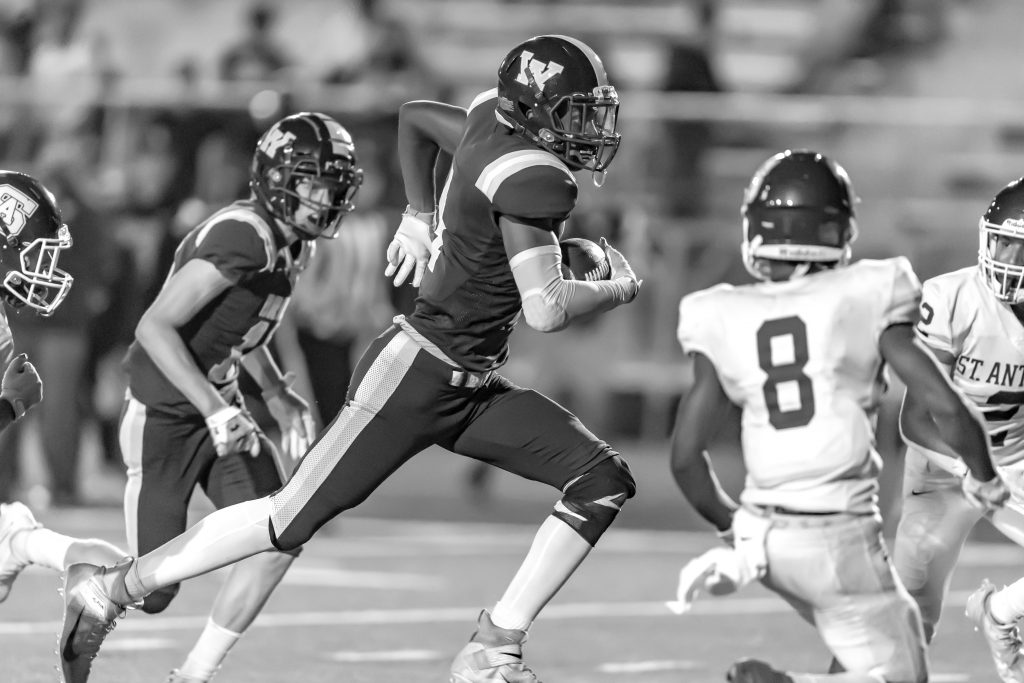 The Moore League girls’ volleyball clash between Long Beach Poly and Wilson on Tuesday has surly set the stage for an exciting season as the Bruins made history by beating the visiting Jackrabbits 25-22, 11-25, 25-18, 25-22 for the first time in eight years. “The girls played with heart,” Wilson coach Carlos Briceno said. “They […]

It’s no surprise that Elijah Jones has a propensity for leadership. The Jordan football team captain is the oldest of four siblings and he helps take care of his immobile great grandmother Cilla Morales who lives with his family. Jones makes food for her, goes to the store for her and sometimes he’ll just sit […]

All of The562’s water polo coverage for the 2021-22 school year is sponsored by Aqualand. Visit AqualandOfTheFree.com to learn more. Wilson boys’ water polo celebrated Senior Day with a 7-6 win over Mira Costa at the Belmont Pool.