The 2021 Acura Grand Prix of Long Beach was a youth movement on Sunday as 21-year-old Colton Herta won the 47th running of the race and 24-year-old Alex Palou won the NTT IndyCar Series championship by finishing fourth in the season finale.

Palou is the seventh youngest IndyCar champion in just his second season as part of the series. He’s also the first Spanish champion.

“That’s not bad, right?,” Palou chuckled before lifting the Astor Challenge Cup. “I’m super proud to be a champion. The Chip Ganassi team got me here. Dream complete. Let’s get another one now.”

Palou finished in the top four in 10 of 16 races in his first season with Team Ganassi.

“He’s going to set a lot of records in this series, and to be honest he’s surprised us since he walked through the door,” Ganassi said of Palou. 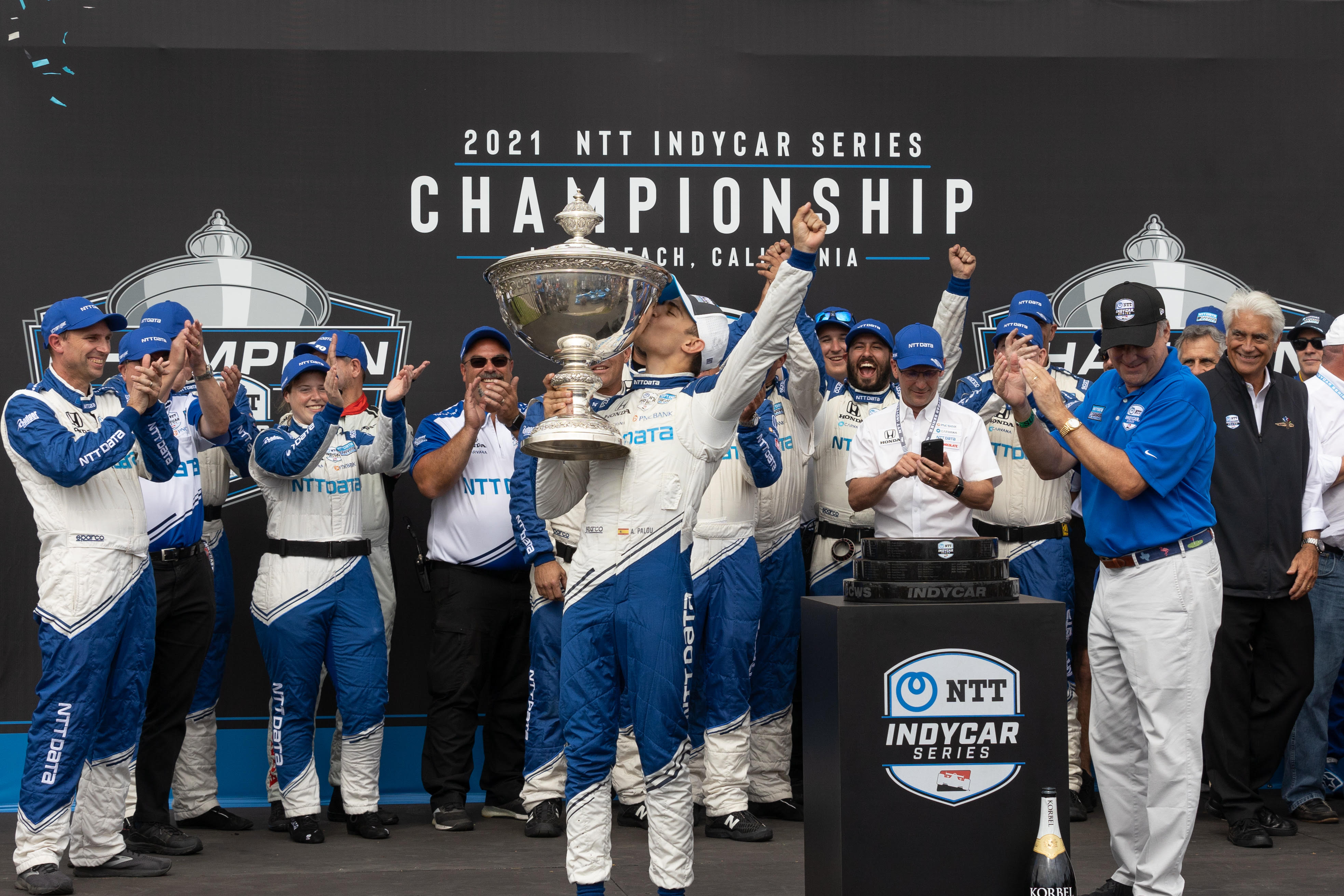 Herta had the most impressive performance of the day after starting in 14th place. The Santa Clarita, Ca. native came to Long Beach when he was a young child to watch his dad, Brian, race the same downtown street course.

“This has been on the bucket list for so long and I’m super happy,” Herta said. “It took a lot of work to get here. What a great way to cap off the year. I just can’t believe it, I’m at a loss for words.”

Herta’s Honda was set up perfectly for the big straightaways on the front and back stretch. He was able to pull away for an eight second lead, and stayed in front after the fourth yellow caution flag and restart on the 66th of the planned 85 laps. Herta held off pole sitter Josef Newgarden and fellow former series champion Scott Dixon, who finished second and third respectively.

“He was on the right tire at the right point in the race,” Newgarden said of Herta being on warmer tires after cautions. “It was a good strategy. If there were no yellows we would’ve been okay in the front. That’s just the way it goes. We came up a little short but we fought all the way along. It’s incredibly disappointing, but we have the crew to bounce back and try to win it next year.”

The Grand Prix of Long Beach ran in September this year for the first time ever after being rescheduled twice because of COVID-19 restrictions.

“A big thank you to all of our fans who came out to support us,” Grand Prix Association of Long Beach President and CEO Jim Michaelian said. “Walk up sales were much stronger than we had anticipated and we ended up with just over 180,000 over the three days, which represents a slight decrease over the 187,500 we did in 2019.”

The schedule change meant it would be the last NTT IndyCar event of the season, and the intense racing early on Sunday proved how much all of the teams wanted to end the year on a high note.

“This is as good as it gets,” Ganassi said. “I’m really happy for (my) team. Championships are won with a lot of hard work and sacrifices that aren’t noticed by the naked eye. It’s a pleasure to represent those people who work so hard.”

Pat0 O’Ward, 22, was also in the running for the series title, but he was spun out in the hairpin turn of the first lap by Ed Jones. O’Ward was able to stay in the race until the 17th lap when the damage to his gearbox forced him back to the pits where he voiced his frustration.

“It’s not the first time he’s hit us and not first time he’s done something stupid this season,” O’Ward said of Jones. “You have to use your head a little more, or at least respect the guys going for the championship.”

Announcers on the NBCSN broadcast said after the interview that they’re looking forward to more driver rivalries with the up-and-coming talent.

“I think we’ve had a great season,” O’Ward said. “It’s not the most perfect of seasons, but that’s how it’s going to be… we have to learn from mistakes and that gets you stronger. We have a strong baseline moving forward.”

Meanwhile back on the track, Newgarden led until the first pit stops following O’Ward’s caution on the front straightaway. Fan favorite Helio Castroneves held the lead momentarily, but another yellow on lap 26 opened the door for Herta.

Herta passed Dixon at turn one of lap 31 to take over fourth place, and then passed Newgarden at turn nine of lap 32 to take third. When Helio Castroneves, Graham Rahal, Will Power and others stopped for their pit stops to try and take advantage of the caution flags, Herta took the lead he wouldn’t lose.

The passes on the Long Beach street course are usually few and far between, but the intensity of the race changed everything. There were 150 passes at the halfway mark of this race, which is almost twice as many as there were in the entire 2019 race.

“I think we proved that wrong because if you have a good fast car you can pass here,” Herta said. “That just showed how good the car was. We were just fast.”

During the final 10 laps Newgarden put some pressure on Herta, especially around the Dolphin Fountain, but Herta was too good on the straightaways to get caught.

“This is the biggest race for me outside of IndyCar,” Herta said. “I was here when I was two weeks old and it was the only race I could go to because I couldn’t fly. I remember coming to this race every year. I can’t believe I won it on my second try.”

Scott McLaughlin also had a nice race to win the IndyCar Rookie of the Year honors for the season, and he said this is a great time to be a young driver in IndyCar.

“It’s exciting that IndyCar is in such a good position right now,” McLaughlin said. “I certainly believe guys like Pato and Colton are good enough for Formula 1, the top level, but I don’t see them wanting to leave. IndyCar is so good right now it’s such a good category.”

The Acura Grand Prix of Long Beach is scheduled to return to the downtown streets on April 10 as the third race of the season.

IndyCar isn’t the only series racing for a title this weekend at the 45th Acura Grand Prix Of Long Beach. The IMSA WeatherTech SportsCar Championship BUBBA Burger Sports Car Grand Prix took center stage on Saturday, and the Action Express duo of Joao Barbosa and Filipe Albuquerque in the #5 Cadillac DPi.V-R took the checkered […]