While growing up in Orange County, Nugent-Sugamele listed his interests as video games and board games.

“I had friends in the neighborhood but other than that I was inside,” Nugent-Sugamele said. “I just didn’t like talking to a lot of people. I never really felt like I got along with the kids in the OC.”

Since he moved to Long Beach five years ago, Nugent-Sugamele has become a confident leader on the football field who even keeps his team laughing.

“He’s a goofball,” Cabrillo coach Shane Gonzalez said of Nugent-Sugamele. “He says some off the wall things that kind of puts a smile on everybody’s face. He’s a great leader and the kids take to him and follow him. He’s one of the few guys who have been here every day since I started.”

“Playing football definitely improved my social skills,” Nugent-Sugamele said. “I talk to a lot more people now and I like it. Now I feel like I can trust the people around me.”

Nugent-Sugamele added that Long Beach also deserved a lot of credit for his personal improvement, and that he was actually excited for change when unforeseen family issues forced him to move before he entered eighth grade.

Just four years after starting to play football, the 6’3” 250-pound Nugent-Sugamele will lineup as the starting defensive end and tight end for Cabrillo tonight as the Jaguars host Glenn.

“I’ve seen a lot of growth,” Gonzalez said. “I think a lot of our kids are like that here. They’re students who play football as opposed to coming in as football players. The development process takes a little bit longer. Now (Nugent-Sugamele) is a good solid player for us.”

Nugent-Sugamele had only played one year of organized sports (baseball) before his freshman year at Cabrillo, and said that the Jaguars sophomore class accepting him at practice that summer helped him embrace a unique challenge on the football field.

“I always watched football and wanted to play football but I never did,” Nugent-Sugamele said. “I think I picked it up so quickly because I kind of fell in love with it. My freshman year I was like hooked on it.”

YouTube videos and Instagram accounts helped Nugent-Sugamele learn how to execute the small details on the field like having good hand placement or ripping through a block. 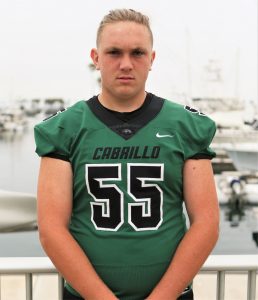 He quickly broke into the starting lineup at the lower levels, and Nugent-Sugamele said the triumph over that challenge gave him the confidence to do things like join the boys’ volleyball and track and field teams. He even ran the 100 meter to work on his speed and explosiveness.

“He’s not afraid to take anything on,” Gonzalez said. “He’s not scared. He definitely picks things up fast and he’s one of those kids where you tell him once and he’s able to figure it out. And when we have to move him around he adapts really well.”

“Coach Gonzalez brings a lot of energy and a lot of commitment,” Nugent-Sugamele said. “Things are going well and (the team is) feeling good. This week feels different. I think we can continue to build with what we’ve been working on. The coaches are a really big part of that. Without them we wouldn’t be where we’re at right now.”

We caught up with Nugent-Sugamele this week for a quick Q & A:

Question: What is your favorite subject in school?
Answer: Science. I’m taking forensics this year and I think that will have me the most interested.

Q: Who are your favorite football teams?
A: Pittsburgh Steelers and Ohio State.

Q: Do you try to emulate any specific players?
A: Myles Garrett and how he gets so low with his rip moves and bends around the edge.

Q: Do you like going to the beach?
A: I went this summer (with some former Cabrillo teammates) and it was the first time I got in the water with the waves. I used to be scared of going in the waves. But all of my friends were there so I wasn’t doing it alone. And I’m a lot bigger now.

Q: What is your favorite food?
A: Meat lovers pizza. I don’t have a favorite place, but Little Caesars is pretty good.

Q: Who on your team can eat the most?
A: Probably me. I love to eat. Chicken Alfredo, classic chicken nuggets and New York strip steak is always good.

Q: Do you have a favorite all-time movie?
A: Ratatouille, I spent my whole childhood watching that movie and I’ll never get bored of it.

Q: Well that’s also food related, so do you enjoy cooking?
A: I can feed myself but I’m not that good. My dad (cooks the most for me) and he makes it in big portions so I don’t have to worry about saving any for anyone else.

Q: Your dad cheers pretty loud for you at the games, can you hear him on the field?
A: Yeah, my dad is a big fan. He likes to show support to the other players too. I love it.

Q: Which video game do you play the most?
A: Warzone. I like the communication and teamwork.

Q: Is that different from the games you played growing up?
A: Yeah, I used to play FIFA and Madden and stuff by myself.

Q: That’s interesting how your video game taste changed.
A: That’s what Long Beach brought out of me, the social skills I didn’t know that I had.

Just 83 days ago, St. Anthony’s football team was at a crossroads. After a  47-8 loss to Millikan, the Saints dropped to 0-3, having been outscored 126-28 to start the year. “It was the beginning of a long season,” Saints senior lineman Eric Suluai said. “I thought it was going to be bad.” It turns […]

This is Championship Central where you can relive the entire Jordan football season before the Panthers play Northwood in the CIF Southern Section Division 11 championship at Irvine High tonight. Kickoff is scheduled for 7 p.m. Jordan came into this season looking to improve after a disappointing spring and got it started right with a […]