There are plenty of college teams in California that will struggle this season due to missing typical offseason events, but Long Beach State women’s soccer is prepared to revamp its winning culture and regain what it lost due to COVID-19.

“It’s almost like starting from scratch and we are looking at it like that,” LBSU’s 17-year coach Mauricio Ingrassia said. “We have to tuck all of that stuff away and start fresh. There’s a couple wrinkles, like starting a couple new traditions with the players. I feel like there’s renewed energy for everyone.”

After missing all of the 2020 season, LBSU returned to George Allen Field last week for a pair of exhibition games in preparation for the regular season. The Beach will visit Cal State Northridge today, Thursday, for its non-conference season opener.

“It was great to get two games under our belt to get those nerves out and the two years of COVID rust,” senior Kaitlin Fregulia (pictured) said. “We’ve worked a lot on the style of play to get the newcomers used to it.”

Last week, LBSU beat FC Golden State 3-1 while junior forward Lena Silano emerged as a reliable center forward with a pair of goals. Ingrassia said she is one of his players who improved their skills during the shutdowns after only playing 61 minutes as a freshman.

“I’m really proud of the players because they responded to whatever situations were ahead of them, and that’s what we train our women to do in our program and that’s to have quality responses,” Ingrassia said.

Fregulia and the rest of the LBSU defense looked strong in the second exhibition game, a 1-0 victory against Loyola Marymount University last Thursday, and she’s one of the reasons that the Beach was picked to win the Big West Conference in the coaches’ poll. Fregulia was the only LBSU player to make the Preseason All-Conference Team.

“She’s very important with her experience and athleticism,” Ingrassia said of Fregulia. “She’s good in the air and is a good leader.”

This is the sixth year at LBSU for Fregulia, who was the Big West Defensive Player of the Year and All-West Region in 2017. She will be joined on the left side of the defense with senior Kaylee Ramirez.

“We’ve both been around for a while so over time we’ve grown together on the left,” Ramirez said. “I had never played left back, so when I came in she kind of taught me the ropes and we’ve been growing our connection ever since.”

Australian import Aimee Medwin is tabbed to be the starter at right back, and the sophomore was lined up alongside freshman Mya Daily in the exhibitions. Daily is a midfielder who started in place of injured returner Elysia Laramie. Redshirt freshman Morgan Houston-Shepherd is the new goalkeeper out of Rancho Murieta.

“We’ve always had the talent because (Ingrassia) always recruits phenomenal players,” Fregulia said. “We’ve come a long way culture wise with a lot of work off the field and that’s changed our chemistry on the field. We work as a unit. If one player is out of it, that throws off everything.”

Redshirt junior Myah Baksh is back to hold down the defensive midfield spot in front of Fregulia. She played in all 17 games back in 2019, and reminds Ingrassia of some of his toughest defenders. Baksh will be joined by redshirt senior Daria Petredes, sophomore Aleea Caceres and others in the midfield. Petredes is a transfer from USC, where she won a National Championship in 2016. Caceres was named to the Big West All-Freshman team last year after starting 13 games.

Silano will be flanked by a lot of speed up top with senior Kayla Cannon, sophomore Sophie Jones, freshman Summer Laskey and others providing support. Cannon missed almost half of last season due to injury, but has a lot of experience with 42 games played at the Beach. 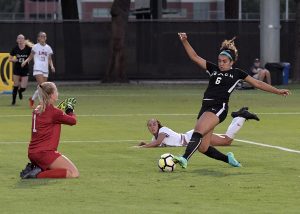 Senior Nadiyah Siqueiros (left) was the first forward off the bench in the exhibition games and scored the game-winning goal against LMU. The goal was a classic example of the style Ingrassia wants his team to play. The move started with Fregulia helping the buildup from the back line. Freshman Maddy Perez then found Laskey on the right flank. She crossed it to Siqueiros at the near post and the senior slid in to get a pair of touches off a slight deflection to beat the goalkeeper.

“I’m way more comfortable on the field, and once we get a rhythm you cannot stop us,” Siqueiros said.

“(The exhibitions) showed us that we can do a lot and we have a lot of depth,” Fregulia said. “We got a lot of players in during our first games and it showed us that no matter who is on the field we all have that passion and want to play. We all have that connection because we’ve built that. That makes us excited to get going and play games that count.”

LBSU has won two of the last four Big West Conference tournaments because they’ve improved throughout the season, and Ingrassia said he hopes that’s the case again this year in a very competitive conference that’s very familiar with each other.

“I see in my players that they’re a lot more knowledgeable about the game,” Ingrassia said. “But I still think we have to seek the culture because it’s not going to come to us like football, baseball or basketball. But we’ve come a long way, so that is very exciting. Even the average fan is more knowledgeable. And I think we’ve turned some fans on to our program and we just have to keep working, putting a good program on the field, be exciting and keep winning.”

LBSU starts the season with a six-game road trip, and the Beach returns home on Sept. 16 to face Montana.

S5E78 – Beach Is Back! Women’s Soccer Kicks Off The Year With Mauricio Ingrassia by lbsuathletics

Season 5 of the LB Fee Show is here! We celebrate a successful first day of competition from Women’s Soccer by talking with head coach Mauricio Ingrassia and as always, Andy Fee the return of the only official LBSU podcast! Subscribe and get the news straight from the AD himself every two weeks!

As if facing one of the top teams in the Southern Section wasn’t enough of a challenge, the Rams were without a few of their starters for their home contest against Servite on Friday night. Millikan, who came into Friday’s game having drawn both of their first two matches, knew that a win in this […]