“Is Long Beach Poly football back?”

That’s the question that was ringing around social media after the Jackrabbits’ undefeated Spring season, which saw them open with an overtime win over Serra before running off a series of shutout wins in the Moore League. National high school football recruiting expert Greg Biggins threw some gas on the fire while calling a televised game on Fox Sports, ranking the Jackrabbits as the top public school program in the state.

Poly coach Stephen Barbee said he’s heard all the chatter about his program as he heads into his fourth season coaching the Jackrabbits.

“It’s these kids that have done all the work,” he said. “They’ve done nothing but show up every day, give it their best effort and putting themselves out there. Our goals as always are to win the Moore League, win the CIF, and bring the state title to 1600 Atlantic. The accolades and everything were based on what last year’s team did–that team isn’t coming out week zero. This team has to earn it. So, have we sat back and patted ourselves on the back about how great we are now? That’s not something that our kids nor our staff is going to do.”

All of that being said, Barbee readily admits that this is probably the deepest team he’s had, and longtime Jackrabbit football observers have this pegged as perhaps the most talented Poly team since the squad that won the 2012 CIF-SS championship. The Jackrabbits are two and three deep at almost every position, with college recruiters distributing scholarship offers like candy.

The team has also been buoyed by some high-profile transfers, including several Long Beach natives who had been playing out of the city at other private schools who decided to transfer back to their hometowns and put on the green and gold.

The backbone of the team, though, is stalwart returners like Donovan Poe. A linebacker/defensive end hybrid, Poe is committed to West Point and is the reigning Moore League Defensive Player of the Year. When he enrolled at Poly the numbers on the varsity team were half what they are now, and there were only a handful of fellow Polynesian players, as opposed to the nearly 50 in the program across all three levels in 2021.

“I always knew my entire life I was going to play football here,” he said. “And I knew we were going to turn it around, I believed that from day one. We have the right kids over here.”

Defensively, Poe is the top returner for Poly but the Jackrabbits feature a scary line that includes Wendell Moe, as well as a deep linebacking corps centered around Jeremiah Fort and Ike Mikaele, with returner Jalen Johnson and sophomore transfer Dylan Williams, who already carries an offer from Arizona State. 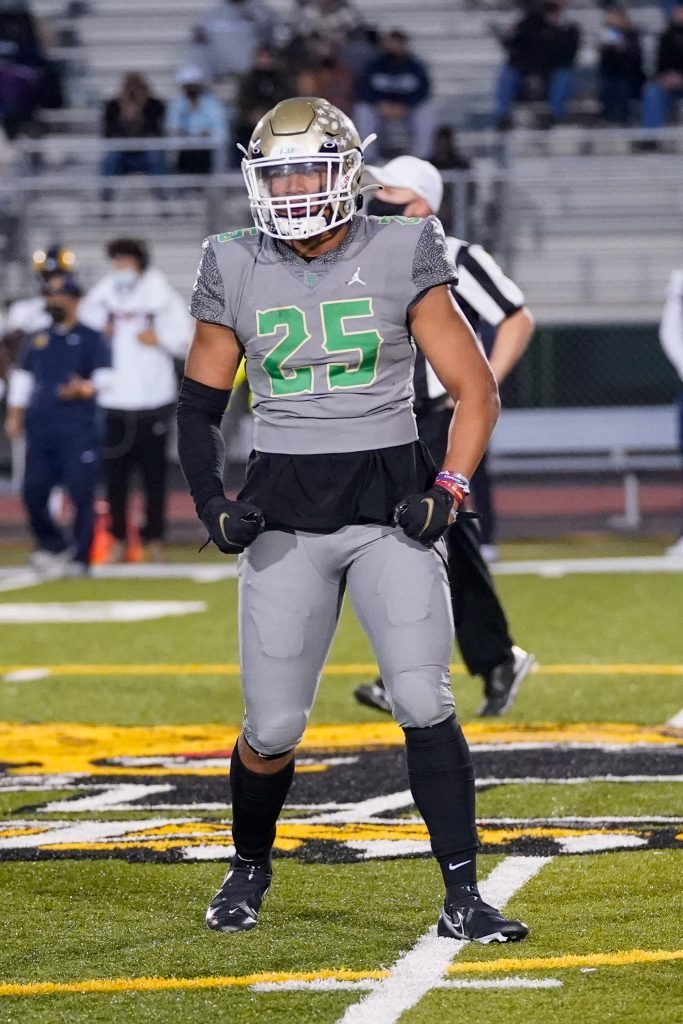 On offense, Poly has a pair of quarterbacks in the mix with returning senior starter Shea Kuykendall, as well as talented sophomore Darius Curry, a transfer from St. Bernard. Curry carries offers from LSU and Georgia, among others, and is the future of the program–time will tell how quickly he picks up Poly’s playbook and how the coaches split up playing time this season.

“They’ve been great, they’re both team-first guys who want to win first and foremost, and they’re both going to play a lot,” said Barbee.

The Jackrabbits are a little thin at offensive line but still feature major talent with returning Moore League Offensive Lineman of the Year Wendell Moe, along with rising senior Tyson Ruffins, Nathan Samoa, Poe, and several young players looking to step up including Tauinaola Lole and Jeremiah Filipo.

Poly has a two-headed beast in the backfield with returning starter Devin Samples and sophomore Joshua Cason, both of whom are physical, downhill runners that punish tacklers. The Jackrabbits are a little inexperienced at receiver but feature multiple scholarship-offered players with Simeon Williams, the Bordeaux brothers Tyson and Titus, and other contributors including Nick Kelly and Mekyle Jackson. Malik Brown will start at tight end, and Poly has a junior kicker in Dylan Michel who only missed one extra point last year.

In short–it’s a complete roster with depth at almost every position, and the Jackrabbits will have a chance to prove themselves against a challenging nonleague schedule that includes Leuzinger and Serra, as well as arguably the two other top public programs in the state in Corona Centennial and Mission VIejo.

“We’re excited about our schedule with a couple of Fox Sports games, and we’re excited about the Moore League,” said Barbee. “We’ve got great coaches in the league, I think things are looking up for a lot of these programs, it’s going to be a fun year.”

Barbee said as the team has continued to grind every day and work on improving themselves, they haven’t gotten caught up in rankings or the hype around players transferring in.

“This team is just trying to prove that when you talk about the elite schools in California–private or public–you’ve got to include Long Beach Poly,” he said. “We’re only worried about what we’re doing, and what we can control.”

The Lakewood Lancers are on the road tonight visiting Corona del Mar for another stiff preseason challenge a week after picking up their first win of the season. First-year coach Scott Meyer has been patient with his Lancers as they’ve faced perennial playoff teams. “They’re very good,” Meyer said of CDM. “They’ve got an explosive […]

The Moore League boys’ soccer season got back underway after the holiday break on Monday afternoon. Cabrillo 3, LB Poly 0 The Jaguars (13-1-2, 3-1-0) jumped over the Jackrabbits (7-4-3, 2-1-1) in the Moore League standings with this victory on the road. Jafet Ortega found Alexis Torres to give Cabrillo a 1-0 lead at halftime. […]