Long Beach Poly alum DeSean Jackson is heading into his 14th season in the NFL, but he still hasn’t forgotten where he came from. Jackson, set to debut this year with the Los Angeles Rams, paid a visit to his alma mater last week, where he surprised the team with brand new cleats for every player.

While the players were still celebrating getting the cleats, Jackson revealed that they were also all about to head to a Champs Sporting Goods store in South Gate, where they were treated to a shopping spree as well.

“For me, it’s bigger than the gifts,” said Jackson. “It’s more motivation, to motivate the youth. This stuff is just the icing on the cake. For me, I like to be personally involved. I’ve been where these kids are and I know the sky is the limit. If you can take care of business at Poly you’re going to college for free. That’s the inspiration I’m trying to make sure that they have.”

Jackson gave a speech to the football team as well, highlighting the necessity of staying focused in the classroom as well as on the field, and also underlining that there’s an expectation of greatness that comes with playing at Poly.

Poly coach Stephen Barbee said that after an emotional 12 months, it was nice for his team to get a visit from Jackson as they’re preparing for the 2021 football season.

“This is a really nice reward for them, and it says a lot about DeSean that he’s out here to give back to them while he’s getting ready for his own NFL season,” he said.

Jackson has remained a presence around the Poly football program, despite a career that has primarily had him on the East Coast with the Eagles and Washington Football Team. Despite that, he usually was on the sidelines for Poly football games on the Friday night of his bye week, and would often give a speech before a game or at halftime. He’s also hosted camps in Southern California, including one in Thousand Oaks last weekend.

“It means a lot to all of us because we don’t get to see NFL players, this is my first time seeing an NFL player here interacting with us,” said Poly lineman Tyson Ruffins. “It’s really great that he did this, we really appreciate it.” 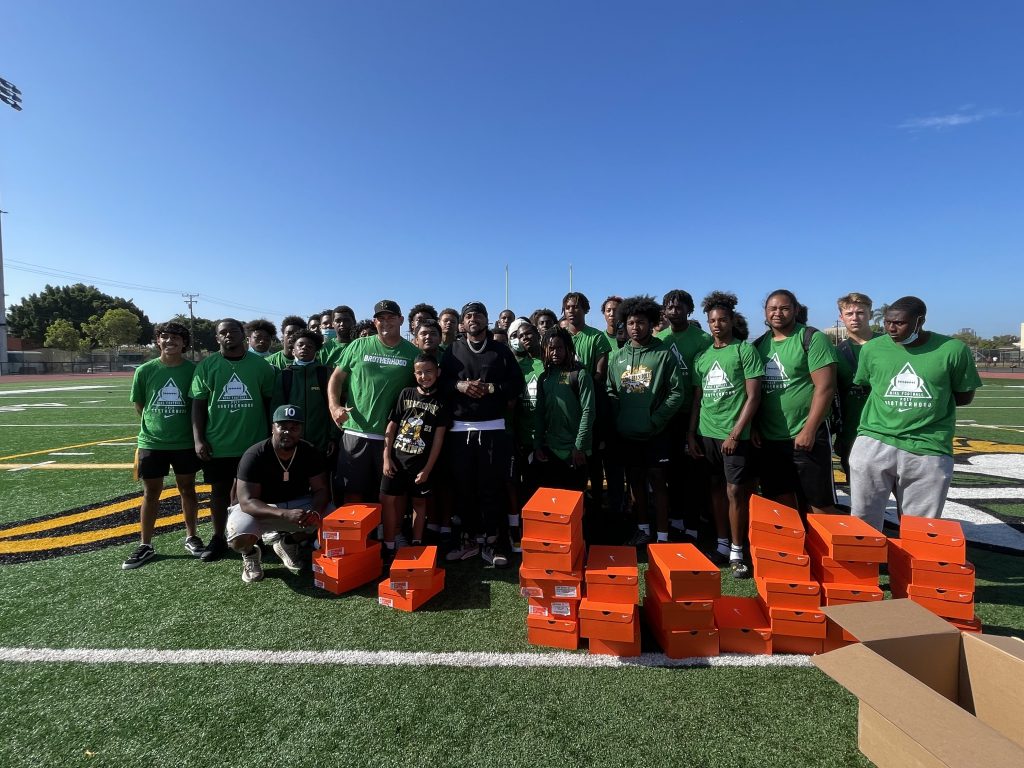 Jackson said he has high hopes for the Rams’ season this year, with quarterback Matt Stafford and a strong roster that he hopes will allow him to continue his record-setting career. Jackson is already the all-time Long Beach leader in professional touchdowns after passing Gene Washington, and is one of the longest-tenured NFL players to ever come out of the Moore League.

He said he’s hopeful that while the kids were wearing their new cleats they’d think about his journey, and how he used the sport to better his life.

“At Poly you’re in the midst of gangs and drugs off the campus,” he said. “I remember we’d see things during practice just over there on the other side of the fence that were crazy. But that’s what you use the field for–uou use it as an escape. That’s what it was for me, it was a getaway. Let me block all the noise out and just focus, and take advantage of a once-in-a-lifetime opportunity to just be with your friends and work.”

Following an undefeated spring season, the Long Beach Poly Jackrabbits are reloaded and ready for a challenging fall slate. Head coach Stephen Barbee has announced the team’s 2021 schedule, which includes some marquee non-league games. The Jackrabbits will open the fall season on Aug. 20, hosting Leuzinger High out of the LA City Section. Then […]

Boys’ Basketball Bishop Montgomery 65, St. Anthony 50 >> There was plenty of hype around the Saints’ big Del Rel League game against Bishop Montgomery, and the Jack Errion Gymnasium was jumping with a near-sellout crowd. In the end, the Saints didn’t have the depth to finish the game after trailing by just six points […]