This is the eighth year of the revived All-City Awards, which resurrect a decades-long tradition of honoring the city’s best high school athletes. Last week, we looked at the top athletes in each sport, and this week we present other awards including Game of the Year and Coach of the Year. The centerpiece of the All-City Awards is the two All-City Athletes of the Year, the top boys’ and girls’ athletes in the city this year.

In the last eight years, our All-City Athletes of the Year have gone on to be Pro Bowlers, Olympians, and NCAA champions. Last year’s honorees are already doing big things — St. Anthony’s Tiare Jennings won a national title at Oklahoma and was named National Freshman of the Year, while Poly’s Peyton Watson just won a world title with the USA Basketball U19 team and is headed to UCLA, while currently projected as a top 10 pick in next year’s NBA Draft. We’re sure big things are in store for this year’s honorees, too. 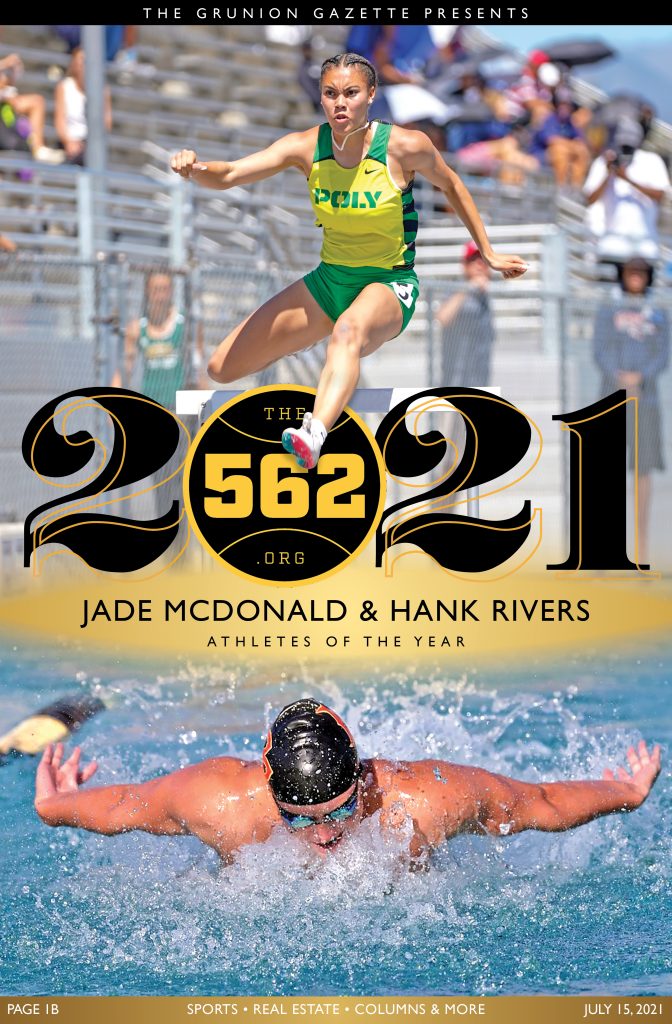 The Moore League boys’ swimming finals in May had been decided an hour before the last race as Wilson cruised to a California record 48th consecutive league title. However, there was still a buzz around the Cabrillo High pool deck before the last relay of the night. That was all because of Hank Rivers, and the Wilson junior didn’t disappoint.

Rivers set a school record with his split in the 4×400 relay race to cap a memorable night and etch his name in the Long Beach aquatic history books once again.“I think about that all of the time,” Rivers said about being part of that history.

“I want to include myself with all of the great swimmers (from Long Beach) and people from the aquatic family that have been through this program. I want to be part of that and it’s really something special. It’s motivation.”

Rivers broke the meet and league records with a time of 1:48.99 in the 200 yard individual medley. His finish broke the league record set by Lakewood’s Daniel MacArthur in 2013, who was also the 2015 All-City Athlete of the Year.

Two more meet and league records fell in the 100 breaststroke when Rivers blew the field away with a time of 54.58. The league record of 54.94 was set in 1978.Wilson coach Eric Berg said Rivers is as good a teammate as he is a swimmer.

“Hank just loves hanging out with his bros,” Berg said. “He trains at an elite level with one of the supreme programs, but when he’s not he loves being one of the boys. It’s contagious… There’s been some great swimmers in generations and Hank is one of those swimmers in his generation. Sometimes you don’t really know what you’re watching when you’re watching it, but this is something pretty special.”

Rivers, who has verbally committed to continue his athletic career at Cal, went on to win CIF Southern Section Division 1 championships in the 100 free-style with a time of 44.65, and the 100 breaststroke with a time of 54.13.

Long Beach Poly senior Jade McDonald was not our preseason favorite to win this award. That honor probably would have belonged to the city’s other senior track and field star on the girls’ side, St. Anthony’s Asjah Atkinson. But a tremendous senior campaign for Atkinson was hampered by injuries, whereas Poly’s McDonald saved her best performances for last.

McDonald, who signed with Iowa, put on one of the more remarkable individual displays we’ve ever seen at the CIF Southern Section Division 1 champion-ships, helping to lead her Jackrabbit squad to a CIF-SS team title. McDonald won individual titles in the 100 hurdles and the triple jump, and took third in the 300 hurdles and the long jump. That earned 32 points in individual events, the most we’ve covered in a CIF-SS Finals.

It says something about the standard McDonald sets for herself that she was annoyed she didn’t win all four events.

“It’s nice to help us get the title, but to be honest I was hoping to do better,” said McDonald. “I kept telling myself this is your last high school meet so just go out and have fun, and that’s what I did. I’m really happy right now.”

What made her performance even more impressive was that because the lower divisions were held at other locations due to COVID-19 restrictions, McDonald had almost no time in-be-tween events. After she won the triple jump, for example, she literally had to jog over for the start of the 100 hurdles.

“I didn’t have any warmup at all, I just had to hurry and go and then I had barely any time after my 100 hurdles before the threes,” she said. “If I would have had like 10 minutes that would have been different, but it is what it is.”

McDonald ended the year with the third-best all-conditions performance in the state in the 100 hurdles, the seventh-best 300 hurdles mark, and the No. 2 mark in the triple jump.

The562.org’s Athletes of the Year

We’ve got some great shots of the Jackrabbits’ playoff win thanks to John Napalan and Art O’Neill of All-In Press.

Long Beach Poly running back Elijah Juarez had one request after his powerhouse performance against Wilson on Friday night in a Jackrabbit victory. Juarez had 256 yards rushing and scored three total touchdowns in the game, but he didn’t want the spotlight on him. “I just want to say that my offensive line made everything […]